Of Shoes and Ships and Sealing Wax... Front Row Seats 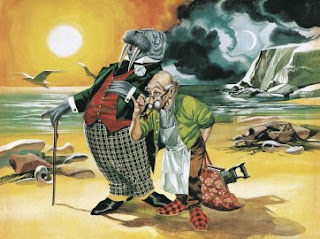 "The time has come," the Walrus said,
"To talk of many things:
Of shoes—and ships—and sealing-wax—
And cabbages—and kings—
And why the sea is boiling hot—
And whether pigs have wings."

~~ Lewis Carroll, Through the Looking Glass

There have been so many interesting things going on in the world lately, I hardly know where to begin. Ever since I was a child, I have always been interested in current affairs -- political, social, cultural -- whatever. We are fortunate to have front row seats to the interesting events of the day.  I have learned that the things that interest me are not always necessarily the things that interest other people, but isn't it fun to be able to discuss them as they are unfolding?  A future king takes a bride, and we are witness to the best man, the groom's brother, as he quietly whispers something personal to the groom, and the groom's shoulders shake as he chuckles.  We are witnessing a charming, spontaneous moment, and two billion people are asking, "What did Harry just say to William?"

Just a few days ago we all had front row seats as the world's most odious terrorist died a coward's death in a filthy, squalid house, hiding behind his wife.  In life he terrorized the world, responsible for the deaths of tens, perhaps hundreds of thousands of Muslims and non-Muslims alike.  No sooner did the whole world breathe a sigh of relief, when a bogus quote, falsely attributed to Dr. Martin Luther King, went viral and everyone felt guilty for feeling relieved.  Well, folks, it's okay to feel relieved that a monstrous terrorist has been eliminated.  No one wants to dance on someone's grave, but to feel relief that he can no longer do anyone any harm, well, that's okay.  Even Dr. Drew said it's okay, and if Dr. Drew says it's okay, that's good enough for me.

In Canada we had front row seats to an historic federal election.  The polls closed at 7:00, and by 7:01 Stephen Harper, the man everyone loves to hate, had been re-elected with a majority government; two opposing parties, Liberals and Bloc Québécois  had been eviscerated, and the socialist NDP party had become Her Majesty's Loyal Opposition. You could hear a collective gasp across Canada as everyone said, "What just happened?" All of this was live and in living colour...

There are so many things we are fortunate enough to witness as they are happening.  It makes us all part of our global community, and we can discuss them and debate them with each other from across the world.  I think it's wonderful.  You may not always agree with my opinions, and vice versa, but we can enjoy the conversations, and sometimes we learn something from each other's point of view.

Now, a note to the Vancouver Canucks:  I want front row seats when you bring the Stanley Cup back to Canada this year.  That would be witnessing history.
Posted by Jo at 8:33 PM

I, for one, have been reeling under the incredible events of the past several days. And to top it off, L breaking his ankle and needing me to help him out was the "icing on the cake." Or should I say the "straw that broke..." lol Lots to dicuss with my students this week, though! And yes, let's root for the Canucks!

Sorry to say it will be the Flyers!
Other than that, a wise post!

Dear One, thank you for a concise and marvelous post!

And thank you so much, for including the information, that that Martin Luther King Jr. quote was fake. -sigh- People got a lot of mileage out of it though, didn't they? -sigh- Trying to make good people be ashamed, to be relieved that a monster had been eliminated from our midst.

And now, after all the interesting and history making happenings... Me'thinks it's time to put our brains back, onto the nitty-gritty issue of financial collapse, which is stalking around the world.

Always a nay-sayer or two in the crowd. Self-righteous and sure that they theirs is the only opinion. Having lived in the Bible Belt of Southern Baptist and Pentecostical Holier than Thou's, I am all too familiar with the desire to make others feel "less than". I was once severely chastised for allowing my children to watch cartoons and play with Carebears and Barbie dolls. The cartoons were supposed to make my children violent, while the Carebears were hypnotic and Barbie caused anorexia. I was looked on as an "outsider" when I scoffed at such. I told the short, stocky opinionated woman that The Carebears had yet to cast any spells, Barbie had not kept any of us from eating (she had never had such a doll, apparently) and that I loved seeing the bad guy get his due. Osama finally reaped his just rewards and I don't feel bad about it!!

Your essays are always so good.

I know nothing about hockey but I like good conversation and not being mean about it.

Last Friday I had some friends over for cards. All are kind, smart and we vary quite a bit politically and in religion. Speaking to a friend who wasn't able to come when told of a certain person's husband confirmed to be in attendance said, "Oh my don't let him read any of his poetry!" I said, "No problem, we'll talk about something like politics." SMILE

It's one of my favorite Lewis Carroll pieces, Jo, and I also put it on a blog post once. But you are right: it is for today's world a reminder that the events of the last week are known by the world over because of our incredibly connectivity. The feeling of being in a global village has never been more obvious to me.

My response to that "Fake" quote...


"I've never wished a man dead, but I have read some obituaries with great pleasure." - Mark Twain...lol

A question:
MORE American citizens( soldiers) died in Iraq war than in 9/11 attacks....any punishment for those responsible?? Think about it!

Leslie, those Canucks had better do it, or I'm personally going to go down there and wallop them with my umbrella. ;-)

Amelia, one of bin Laden's goals was to bankrupt America. It was part of his al Qaeda plan. After several trillion dollars have been spent on terrorism, it almost worked.

Kathy, oh, yes, there will always be people who will make us feel guilty for being human. I work with people like that -- holier than thou and judgmental.

Charlene, love it...! People will always disagree with each other to some point, but the main objective is to be courteous about it.

Djan, the world is getting smaller and smaller. Time and distance almost have no meaning anymore. We are instantly connected to each other.

IP, yes, sadly, there are always casualties in war. Saddam Hussein killed thousands of his own people -- innocent men, women and children -- so I think people are relieved that he is gone too. Sometimes it just has to be done...

The world is a complicated place and to all those who insist(along with Chicken Little) that the sky is falling - there is hope when a tyrant is brought down on the one hand, and on the other we can spend some time doing nothing but enjoy a royal spectacle.

MerCyn, I totally agree with you. Life has to be enjoyed as well, doesn't it? That's why we get rid of tyrants. ;-)

Jo, what happened to the Liberals! How did Harper get such a strong mandate?

Calvin, that's what everyone was wondering. The Liberals had outlived their purpose, anyway.

Canada , just like Britain , is the latest country where Right won even though majority of the people voted left!!!

What does it show??

Electoral results NOT reflecting popular opinion..or elections actually undermining the will of the majority ..

In Britain center-left parties got 55% to 60% of all votes....still conservatives formed the govt....

Globally , this feature is perhaps the biggest drawback of electoral democracy

IP, yes, except that in Canada, everyone secretly loves Harper. He is an economist, and right now our economy is strong, our dollar is almost at par with the U.S., and everyone I know voted for him. I, for one, got tired of the Liberals. They have done nothing for me.

We do indeed live in very interesting times. And while this is probably true of all times, the media which connects most of the world's peoples makes us privy to events we wouldn't know anything about in the past.

I was struck by the death of bin Laden following so closely on the heels of the British royal wedding. This week has certainly left us gasping for breath. And I hope you get your front row seats at the Stanley Cup.

We do live in interesting times, don't we? I sometimes wonder if our grandparents, who lived in the time of great inventions, felt the same overwhelming feelings?

The only other major news I would include is the horrific weather we've been experienceing in the States...tornadoes, flooding, drought in Texas, and wildfires now in California.

Incredible, all the stories!

Jo
I'm not into hockey, although living in MN I should be, but I am hoping the Canucks win for two reasons. First is because I love Vancouver since my visit there years ago, and second because I was privelaged to attend a concert last week of the "Canadian Tenors" and they would keep us posted on the score that night. They were fantastic and so enjoyed the concert.
GO CANUCKS!!

Every year I hope for the Capitals to bring the cup home to DC, and every year I'm disappointed. I think your Canucks have a much better chance...D