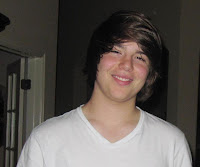 A few days ago no one had heard of this young man, and now after the devastation in Joplin, Missouri on Sunday, most of us are familiar with his story. He is the boy who was missing for four days, after being pulled from his car by 200 mph winds during the monster tornado. In the days following, his family searched for him with no success. In the wrenching hours and days since the tornado, the boy's father, Mike Hare, said he'd searched hospitals and continually called his son's cell phone, getting no answer. "It rang for the first day and a half, and now it goes straight to voice mail. But just in case he gets it, I want him to know his dad loves him," the father said earlier this week. ~~ CNN

This is a heartbreaking story, and puts a name and a face to the devastation of the tornado.  When I saw the story on CNN, I couldn't help thinking how much this 16 year-old young man resembles our Phinnaeus -- except for the Justin Bieber hair -- they are very similar.  The features and the winning smile are the same, and they are just like millions of other teenage boys out there who are venturing towards their lives, trying to figure things out, being goofy one minute and serious the next, perhaps testing boundaries, while at the same time needing to feel safe.

The story doesn't have a happy ending; Lantz Hare's body was found today.  His parents are beyond devastated.

We never know, do we?  One minute we're hollering at them to do the dishes or mow the lawn, or for goodness sake make their bed and finish their homework.  The next moment we're laughing at some completely ridiculous joke they've told, or that perfect imitation they did of their math teacher.  It's all part of the day-to-day stuff we take for granted.  Until it's gone.

The loss of this young man will create a huge, unfillable hole in his family member's lives.  Forever.  There will be a hundred small things about him that they will miss -- things they perhaps never really even noticed until he was gone.  His winsome face will smile out from the Internet, and he will be the face of what can happen when things are perfectly normal one moment, and are irrevocably changed the next moment.  Forever.

Now, wherever you are, get up from your computers and go and hug your kids.  They'll probably wonder what the heck you're doing, but do it anyway.  If they ask why, tell them, "Because Jo said so..."
Posted by Jo at 7:25 PM

Mine aren't close enough to give them hugs but I did dash off an email with hugs. There is so much sadness in the world of late.

That is so sad! However, they know now what happened and can lay him to rest properly. Their lives will never be the same.

We have been to Joplin a few times and it was a very charming town ... sure feel for the people there and the tremendous loss suffered by many.

If I had kids, I guess I would be too soft of a mother to them, so I would hug them everyday anyway...

How very sad. He looks like he was just a wonderful person full of potential, doesn't he? Sigh.

I'm very much with you on this hugging thing, especially now , in this period of much talk about the 'dark future' awaiting the young generation (economic collapse, Nature's increasing fury, etc..).

Very well sad Jo. Our lives can change in an instant. I never leave my daughter without telling her I love her. No matter what.

Oh Jo... I am crying of course! I didn't know they found his body and I had such high hopes he would be found alive. I have an 18 year old son who is everything to me and so Lance's story hit hard with me. You have described my son and his friends perfectly and I am going to hug him as soon as he comes home. Jo said so!

So much grief everywhere. No wonder the Rapture people were hoping for that event to end things.

My children and I never end a phone conversation without saying "I love you" to each other. I miss their childhoods so much - the thought of outliving any of them is impossible to bear.

So many of the comments mirror my own heart. My kids live away from here,but we never end a conversation with out the 'I love you's'.

I'm so sorry for this family, and all the others who have lost a loved one. The baby from OK was so sad too. Ryan Hamil was his name. He was sucked out of his mom's arms. He was just a toddler. The family also lost another son, and the daughter is in the hospital with injuries, and also the mother, who is also pregnant.

Thank you for sharing this story, Jo.
May he rest in peace and his family somehow find solace. Such a tragedy.

Thank you for posting this human touch story that makes the devastation more understandable.
Wish I could hug mine in person... but at least I have that option. They don't live at home any more. Sometimes I send them Mom-Love messages via text, then they call each other and ask "what do you suppose Mom was watching on TV?" because that is usually when I get moved by something and feel compelled to call them.

I call each and every one of my kids each week to tell them I love them and my grandchildren, too. Sudden death leaves one in such shock. My heart aches for anyone who's lost a child, no matter how and no matter how old...

It is coming up on the 6 month anniversary of this horrible loss and I stumbled across your blog today. I just wanted to say..."Well put...if anything else, Mike and I would love for everyone to remember how very short and precious life is...hug those you love..especially those seemingly invincible children!" I actually sent this to Mike this afternoon after a long day and he appreciates the simplicity and the kindness behind it even if you never knew our beloved Lantz personally...Thank You