To The Victors Belong The Spoils... 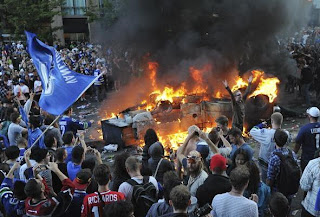 Last night a bunch of thugs descended on Vancouver and used the 7th game of the Stanley Cup playoffs as an excuse to trash our beautiful city.  These yobs were not Canucks fans, they are professional anarchists that travel from city to city and create havoc.  They attempted to do the same thing during the 2010 Winter Olympics, and they trashed Toronto during the G20 Global Economic summit last year, smashing windows and setting fire to police cars, just as they did in Vancouver last night. They're not Vancouver Canucks fans, and many of them are not from British Columbia.  They're organized, and they're armed with mace, knives and molotov cocktails.  And they were prepared to riot whether the Canucks won or lost. 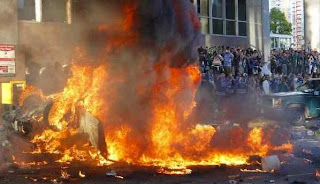 Vancouver Canucks fans are passionate about their team, and they were understandably disappointed that the Stanley Cup was won by the Boston Bruins. The Canucks should have won ~~ or at least, they should not have lost. They were the best team in the league this year. But in the spirit of true sportsmanship, everyone knows the Bruins played a better game last night, and they won fair and square. No one disputes that, least of all the Canucks fans. So, to the folks out there who think this rioting was being done by disheartened Canucks fans, it was not. The true Canucks fans are on the streets of Vancouver today, cleaning up the mess left by these yahoos, who by now have probably crawled back under their rocks gone back to wherever they live.

These creeps have ruined the spirit of the Stanley Cup in Vancouver and they have given Vancouver a bad name. In my opinion, that is a bigger disappointment than the Canucks losing the Cup. The rioters' faces are plastered all over YouTube and in photographs, and the police will get them.

Congratulations to Boston ~~ you played a good game, and thanks to the Canucks for doing us proud.
Posted by Jo at 1:42 PM

There are just some people in our world who will use any excuse to destroy things. Sad, but true.

I have been to your beautiful city many times and know many more of her peoples...it's always a sad few that have to make their ugly mark. I know you will survive, not only the loss, but the bad rap you are all getting right now. Peace.

I thought of you the moment I turned on the news this morning and I couldn't wait to read your blog. I knew you would have something interesting to say about it.You never disappoint. I am so sorry those thugs attacked your beautiful city, I clearly saw many of their faces in photos on HuffPost, they will get caught.

Who pays for their transportation to events, I'd like to know. :-((((

Saw this on the news today and suspected that they are organised thugs not related to the city or the sport. About time this sort of thing was stopped.

I woke up this morning and heard a newshead say there is rioting in Canada, I though I was in a parallel universe this morning!

I'm glad you explained this to us.

Well said, Jo! I am sorely disappointed that the world has seen such behaviour come from our Beautiful B.C. What a way to tarnish a great city's name. I am ashamed that those idiots put such a disturbing twist on a great game played. The fans weren't the ones trashing things and being jackasses, the fans were the ones who stuck around the stadium while the cup was being hoisted and cheered on their beloved Canucks even in the face of defeat. To those mobbing losers, "Shame on you! Karma is a bitch, baby, so watch your back!"
Good game boys! Congrats Boston!

It's very sad indeed. I didn't believe for a moment that these were legitimate fans of the sport. I am truly sorry that this happened in your beautiful city.

When I heard about this on the news I said to myself, "Wow, can't wait to see what Jo has to say about this!" You didn't disappoint. So glad to hear the truth as you can't trust the media. It was sad regardless because it did cast the Canucks in a bad light. Hopefully peace has been restored and none of the brave peace officers were hurt.

Hope they make an effort to catch these idiots. Feeling bad for the businesses and taxpayers who are left with the mess.

Thank you for explaining that. i was troubled because everyone knows that Canadians are exemplary people!

So sorry you experienced this.

Whoa, I am offline for a day & this happens?
:(
Some people are just so low!

Rioting just seems so... anti Canadian that I was really confused when I heard this story. It is sad that these thugs ruined a great event.

You have a way with words, Josie, and no one could have explained it better! I,too, am so sad to have had our city, province, and country put in such a bad light by a bunch of yellow-bellied yahoos!

How awful. Simply terrible. I'm sorry that happened in your beloved city.

Reminds me (almost to a T) of the Detroit winning the world series in '84. Exact same reaction from people who never even had a ticket to the game. Odd how evil has become the reaction to something meant as sport and entertainment.

I saw your comments on Facebook the morning after it happened. I was wondering what had happened to the Canadian spirit, I should have realized they weren't people from the neighborhood.

I do hope these thugs will be prosecuted for their crimes.

Good morning Jo, If you remember Sean and I are from Boston and are HUGE Bruins fans. Although we are thrilled that they won, we were horrified and saddened by the "lack of sportsmanship". I was so glad to read your post this morning. I feel so much better knowing that this was a group of thugs and not a group of 5 year olds throwing a tantrum because they didn't win the game....lol. Better luck next year!

No one here in Seattle thinks that Vancouver would act like that, we know Canada has its picture under polite in the dictionary.

I wish with all my heart that Canada would win the World Series in Baseball..just so it would actually be a world series and I would so Blog that stuff to pieces. I mean we win it every year....well done to the U.S.

As a San Jose Sharks follower, I was sad that they lost to the Canucks in the Western Conference finals, but tribute must be paid; Vancouver clearly had the better team. Even those who are only casually acquainted with hockey could see that.

That's why the disappointment in the Game 7 aftermath wasn't the rioting from professional agitators--who you eloquently explain were not from Vancouver--but the loud and continuous booing inside the arena when the Bruins were presented with the Stanley Cup. We shouldn't have expected loud applause, but maybe there should have been some acknowledgment from Vancouver fans that Boston won fair and square.

Another explanation is that the boos were for NHL Commissioner Gary Bettman, who has overseen the move of several teams from Canadian to U.S. cities. Unfortunately, these days many people don't dig deeper than a picture or a short video clip. We hear the boos, see the riots, pass judgment, and turn the page.

Well, let's hope that all we'll remember a year from now is the image of the couple kissing as the streets went crazy. (http://www.cbc.ca/news/canada/story/2011/06/17/vancouver-riot-kissing-couple-eyewitness.html)

Thanks for your clarification. I have to admit I was disappointed to read about the riots. But even though the perpetrators may not have mostly have been from BC, it is still a stain on the city's reputation. I hope the police takes a stern position on this.

As for the Stanley Cup, better fortune next year.