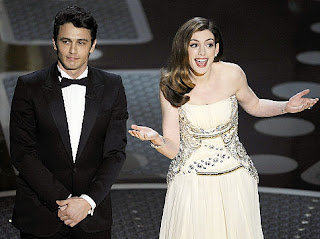 Watching the Oscars the other night was like watching an episode of "Sesame Street". I love James Franco and Anne Hathaway, but not as hosts of "Hollywood's biggest night". Franco phoned it in, and Anne was delightful, but was doing all the work. It was painful. I remember watching Academy Award ceremonies that were hosted by Bob Hope. He was edgy, entertaining, irreverent, politically incorrect, and really, really funny.

Every year, folks complain the show is too long and too boring -- which it is. Most of us are not interested in best animated short film, or sound mixing, or short live action film. We're mostly interested in the big five -- best supporting actor, best supporting actress, best actor, best actress and best film. All the rest is a big yawn. The Oscar show should be about the show itself. It's a major production, and Hollywood is a company town; they're in the business of entertaining us. So entertain us, already...

I was mortified for Melissa Leo dropping the "F" bomb during her acceptance speech. It wasn't bleeped out here in Canada, so we all heard it. But you have to admit, it was the most memorable moment of the evening.  It was the main topic of conversation the next day.

I thought Ricky Gervais was amazing hosting the Golden Globes. He was ... edgy, entertaining, irreverent, politically incorrect, and really, really funny. Please invite him to host the Oscars next year. We're big kids, we can take it. No more "Sesame Street" ... please.
Posted by Jo at 7:59 AM

I have to agree with you Jo. I thought Anne did all the work.I loved her with Hugh Jackman, now they were great together. The Oscar's were very boring this year. I didn't see The Golden Globes but I think Ricky Gervais is hilarious. Maybe next year will be better.

I agree. Anne Hathaway was darling as usual, but it was exhausting having to watch her work so hard to carry the show by herself.

I'm rooting for Steve Martin and Alec Baldwin to come back next year.

leilani said...
i agree with you Jo! Life is way tooo short for mundaneness!! =0D

original post was a mass of misspelled words!! whewwww

Love it when things go wrong! Elton John swore on a breakfast show with children listening a few weeks ago. Memorable - bet it was all the children would remeber!

I just read that a TV commentator was critical of having the group of children from Brooklyn singing "over the rainbow" at the end of the awards. Seems it was inappropriate. I thought it was dear and a niece ending to the program.

Oscar night is a national holiday at our house that my family and I look forward to each and every year. (Get a load of this: to insure she would love the Academy Awards as much as I do, before my daughter Puppet could sit on her own, I pillow-propped her up in her teeterbabe in front of the tube, where I force-fed her movie stars on the receiving end of prestigious golden men! Whew!----> Eighteen years later and sitting pretty, my little girl forever loves the Oscars!) We were never so disappointed as we were this year, barely "tolerating" the Franco/Hathaway Fiasco, as we now refer to it.

I have absolutely no idea what was up with James Franco!? Was he drunk? Did he even want to be there? I don't think so --and his Marilyn Monroe get-up did nothing to improve him, which was a shame. Any other guy would have pulled off a sketch like that quite nicely...even endearingly...perhaps even sustaining "funny", something I didn't feel Franco was working too hard at achieving in the first place, since he had to resort to a Charlie Sheen joke just to keep his audience's attention.

Plus, I would have taken absolutely anybody (even Kirk Douglas, who, I believe, stroke or no stroke --and strike me dead for saying so, if you want to-- should have gotten the hook two minutes after he started talking! Come on Kirk, it wasn't your night. And double-strike me dead, because I'm not afraid to say it: I'm more than certain Dick Clark was cringinging during some of that.) over Anne Hathaway as co-host!

It's true. Everything that comes out of that woman's mouth sounds obnoxiously rehearsed to me. Even when Hathaway flubs, she purposefully "finds her place" again (<--sometimes doing so very out loud, like it's part of "the job", because she is, after all, an actress) and picks up where she left off.

Please, don't get me wrong, Anne is a lovely...creature. But I'd be willing to bet she drives her friends nuts with just normal conversation. Uh-huh, her last Sunday's Brown Duck role is exactly how I see Hathaway all the time. When I heard she was going to do this year's Oscar hosting again, I had to constantly stop myself from imagining what was in store for me on February 27th, Oscar show fillerwise, in order to not turn myself insideout before my favourite TV night of the year actually arrived.

Come to think of it, I only liked A. H. in The Princess Diaries... Hm. Maybe I'm thinking Julie Andrews.

As for Melissa Leo dropping the "F" Bomb: I thought she planned it. Leo most definitely was separated at birth from my "admirable" sister, who pulls "cute" stuff like that for a living, always following it with an innocent act. (<--"And the Oscar goes to....")

Man, sorry about the rant. I'm going to go make myself a drink. Can I get you one, too?

*returns with the alcohol and raises a glass* Here's to next year's Academy Award presentation!

Jennifer, Ricky Gervais is a hoot, isn't he? He's the perfect Oscars host.

Margaret! It's nice to see you bloggin again. And yes, Steve Martin or Alec Baldwin. Or even Billy Crystal. :-)

Leilani, I love that word -- mundaneness. *heh* The Oscars were worse than mundane. :-)

Denise, oh, goodness. I would imagine in this day and age, the children hear worse in the schoolyard. *heh*

Blue Ridge, I agree, I thought that was the best part of the show. It was wonderful and spontaneous, and all the award winners went onstage.

Sparkle, Oscar night is a national holiday at my house too! Oh, goodness, I have never, ever, ever (!!!) missed an Oscar night. And yes, what the heck was Kirk Douglas doing there? He was a wonderful actor, an icon, and Hollywood royalty, but I think most folks would like to remember him as he was. It was agony to watch (and listen to) him. And yes, please, I would love a drink. Gin and tonic, thank you. :-)

absolutely correct. I can't even watch these show anymore, the scripts are boring and jokes lame.

The big comfort is that unlike Nobel, Oscar hasn't deteriorated and the right picture and actors got the Big Prize.

When I was a tot, there was a radio show on Sat. mornings in which "Uncle Don" read the comics to American kiddies. On one occasion, thinking he was off the air but wasn't, he said, "That oughta hold the little bastards for another week." And that was the end of Uncle Don.

Watched the whole show for the first time in years. Have to admit I did not see most of the films up for awards. Watching made me realize how out of it I am with the latest movies and celebrities.I must be the only one who waits until the movies are available On Demand. I do like Anne Hathaway, even though her performance was less than Oscar-quality.

Anne was just enchanting! I was not impressed at all with Franco, he seemed to act like he was just to good to even bother.

Anne was just enchanting! I was not impressed at all with Franco, he seemed to act like he was just to good to even bother.

Perhaps in a couple of years more people will remember the evening for Melissa Leo dropping the "F" bomb than for Kings Speech winning best movie.

I watched the entire thing, too. I was really disappointed with Franco, who as you said seemed to have phoned it in. Anne Hathaway was cute and funny and I learned that she can also really sing.

And I was hoping against hope that "The King's Speech" would get best picture, and it did!

Totally agree with you. It was a painful evening.