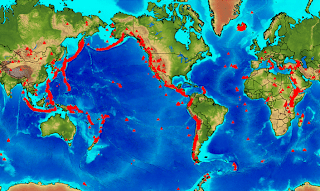 Vancouver sits on the Ring of Fire, where there has been a lot of earthquake activity in the past few weeks -- first in New Zealand and now in Japan.  Something is going on in the earth's tectonic plates, a major paradigm shift, as it were.

We also have 100s of volcanoes in our mountain ranges, and Marigold has a perfect view of the volcano Mt. Baker from her bedroom window. Another of the volcanoes in this area is Mt. St. Helen's, which erupted at 8:32 a.m. on Sunday, May 18, 1980. I was at my mother's place in Victoria on Vancouver Island, and we could hear the explosion. The plume of ash rose 80,000 feet in the air and ash was deposited over 11 states in the United States, as well as over British Columbia.  This is a picture of Mt. St. Helen's the day before it erupted, and then two years later.

We often get small temblors (not tremblors) here in Vancouver.  I sometimes glance over and see my plants swaying, or I will hear a loud crack in the building.  These are quite common occurrences. These temblors register on seismographs, but most people will go about their business and not notice them. Earthquakes are measured on what is called the Richter scale. Major earthquakes usually measure between 6.0 and 9.5, which was the highest ever recorded. Each increase of one unit on the Richter scale represents a 32-fold increase in the intensity of the earthquake. An 8.5 earthquake is 32 times more intense than one that measures at 7.5, and a 9.5 is 32 times greater than an 8.5.  The earthquake in Alaska that caused the Pacific Tsunami which hit the town where I lived was 9.5, and the recent earthquake in Japan was 9.0.  Those are extremely powerful earthquakes.

On February 28, 2001 Seattle had an earthquake that registered 6.1, and we could feel it here in Vancouver.  I was in the photocopy room at work when the cabinets began swaying.  I went back to my desk, and my co-worker was sitting with her head between her hands.  She said to me, "Oh, Jo, I was out for dinner last night and I think I drank too much wine. I have such an awful hangover, it feels just like an earthquake..."

Vancouver is long-overdue for what they call "the big one" and I have an earthquake kit under my desk at work, just in case. But Japan was probably the most earthquake-prepared country in the world and it was no match for a 9.0 quake. Once those monsters hit, there's not much folks can do, except maybe put their head between their hands and pray.
Posted by Jo at 9:15 PM

I'm as prepared as I can be with water, food, etc, but I'm not prepared for the misery and anxiety that will come with it. Hands together in prayer is all that I can do at that point. take care.. ;j

Once again, Jo, you've posted a provocative post (how's that for alliteration?....or redundancy on my part?)

I was living, in May 1980, in a very small 'fishing cabin' that was built on the shores of American Lake south of Tacoma, WA.

No TV, so I woke up on that Sunday morning with the feeling that the old structure had shaken. Went back to sleep and later in the day as I walked outside I observed the rhododendrons frosted in something.

It was ash of course that had been blown from St. Helen's all the way north to Tacoma, WA.

I'd been taking an astrology course at the time and the instructor and the 8 of us had talked about a weekend trip to the 'mountain' to observe.

(In August 1980 as I headed south to Texas the ash piles on I-5 outside Portland were astounding. I'd thought everything had been cleaned up!)

The section of I-880 that collapsed was a route I'd taken a few times to go into the city and call on customers.

The choice and ability to live in an E-zone is astounding to me.

What, exactly, is your kit? And what size building do you work in?

What floor do you inhabit?

Please....let all of your faithful readers know about your preparations at work and at home.

We care about you.

If you should ever find yourself in dire straits (not the band name), please know that I'd put you up in a heartbeat.

I wonder sometimes if the BB Death Counter will keep up with natural disasters?

We're in the same boat as you, awaiting the long-overdue "Big One." People ask why I live here, but it's a trade off anywhere.

And as you stated, Japan was far better prepared than either of our countries, and...

I have felt a couple of very, very small earthquakes and it was a very weird feeling. What control can you have when the whole world is shaking?
You do what you can and hope for the best. Surely there is some warning that these things are about to hit...?

No matter where one lives, one is at the mercy of Nature. Wind, water, earthquakes, ice...y'makes yer choice and takes yer chances.

Mother Nature can be astonishingly beautiful and delicate or overwhelmingly powerful.

I live far away from any ocean but the few times I have seen it I have always been amazed by its power.

I am glad you have preparations in the event of a tragedy. We cannot do anything about such things but we can be as prepared as possible.

In any event, we always need to try to make the best of any day.

During the last two decades, we're witnessing a fierce battle between Nature and the monster created by the human mind ,the Nuke.

In my opinion, it is the nuclear experiments that make Nature mad, causing her to retaliate with extreme changing of climate,more frequent earthquakes, tzunamis etc..

Who's going to win? Not Man. He's the first victim of all this. Probably not Nature. The Nuke will contaminate everything and gradually destroy the universe.
It will take hundreds, maybe thousands of years to rebuild (recreate) the world. Perhaps it's God's wish to do a Reset.

The devastation in Japan is horrific, and continues to scare me, too. We are right here in the middle of Earthquake Central, and they say we are definitely overdue here in the PNW.

I have only experienced some small quakes, mostly in Southern California, but I remember seeing huge cracks in the walls in some buildings there, which really scared me, thinking of being inside something when a big one hit.

As usual, you've got me thinking.

But I laughed at your story about your coworker :)

One would wonder why anyone would want to live so near possible danger ...... but there really is nowhere without it, is there?

i am praying for you and your family's safety.

I know it happened, but when Mt. St. Helen erupted, I was at VGH awaiting the birth of D2! Let's hope Mother Earth has made her point and will settle down now.

An earthquake of a hangover. That's a new one on me.

I happen to live on the side of a volcano and in the past we have had numerous earthquakes, actually we have small ones all the time just as you said and we rarely notice anymore.
In the early
1980's we had a few big ones that damaged my elementary school enough that we were all moved to the high school while a new school was built. We were very lucky that the earthquake happened on a Sunday otherwise students would have been injured or maybe killed.
I remember being so scared to enter a building after that earthquake, my little brother and I ate all our meals outside for a couple days after that, even so I cannot fathom how it feels to be in a 9.0 earthquake. On top of that the Tsunami and Nuclear problems just seem impossible. I have been glued to the TV in sorrow. The Japanese people must be so terrified.

Humans like to pretend we have control, but nature will always remind us of her presence.

I also keep a small emergancy kit, flash light and tennis shoes at my desk.

Every time I hear about the Cascadia Subduction Zone, I think about you, as well as other family and friends in the Pacific Northwest.

My aunt and uncle were actually camping out on Mt. St. Helen's when it erupted. They lost their camper but thankfully, that was all they lost.

I lived in the Bay Area for a while and felt one small earthquake. It was disconcerting. That said, my friends in SF were amazed that my family lived where "all those tornadoes" rip things apart every summer. So yes, you can't escape Mother Nature one way or another. And the natural beauty of SF and the PNW are amazing. It doesn't surprise me a bit that people choose to live there. There are days when I wonder why I relocated. :)

This was a really interesting read, with my head full of relatives and friends back in New Zealand whose homes/lives have been reduced to rubble, it's been hard to gain perspective. I was there for the first Chch earthquake, and that was scary enough (late last year).

The photos of Mt St Helens were amazing, what a bang that must have been!

I identified with this post as I too live along the ring of fire. Thanks for this thought provoking post.

When I lived in the mountains of NC, I actually experienced two earthquakes. They were quickly over, but they broke windows! The first one sounded for all the world like a plane crash! D

We're in the major quake zone too, and I can't help it--I know I'll be out of my mind scared, but it's all so exhilarating to me, to be at the mercy of an utterly disinterested planet. It makes me feel small, and since I am, it feels right. Rock on, mother Earth.