Ladies And Gentleman, We'll Be Circling The Airport... 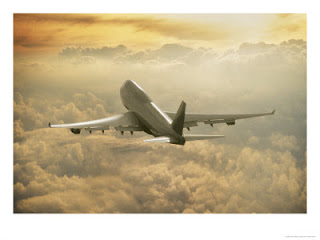 As everyone knows, I am not particularly fond of flying. I am what is called a white knuckle flyer. I prefer to be called a two-vodka-and-orange flyer. I prefer to sit in the middle of a plane, wrapped in a blanket, with a drink in each hand, pretending I am on a bus.  No window seat for me, thank you very much.  But I had a friend who was an international pilot for Air Canada, and I once asked him, "How on earth can you fly planes for a living?  You fly between here and Hong Kong, and that must be at least 14 hours each way..."  He said to me, "Flying is really safe.  I have been flying these birds for over 20 years, and I have never left anyone up there yet."

Well, I guess he never flew into Reagan International Airport in Washington, DC.  Just when I thought there was nothing more to worry about on planes -- loose screws, loose screwy terrorists, etc. -- now I have to worry about the air traffic controllers falling asleep, while the plane circles overhead.  It's sort of ironic that it happened at Reagan International Airport, since President Ronald Reagan fired all the air traffic controllers in 1981 because they wanted silly thinks like, oh, decent working hours and better pay.

I have a feeling there is a back story to the poor, unfortunate air traffic controller who fell asleep the other night, but believe me, I don't want him in the tower in any airport that I may be approaching.  No, thank you.  I want those airplanes wheels on the ground as soon as possible, preferably with the rest of the airplane intact.
Posted by Jo at 8:01 AM

I have to wonder if he was actually sleeping. He was the only one working and I am in that position more often than not. There are times when I have to go to the bathroom and I can hear from my bathroom if anyone comes into the store. Wonder how close the facilities are to the actual work area in the tower ....... I suppose there are lots of air traffic control towers manned by just one person and one would wonder at the wisdom of that. It has also occured to me that I have over used the word 'wonder'! I wonder why ......

Oh, thanks for this, Jo! I'm sitting in the San Francisco Airport right now, just having found that my flight to Dallas has been delayed. They don't say why... should I worry? You know I am a worry wart! :-)

Fortunately the worst did not happen.

Aloha to you
from Waikiki!

I just finished reading the article in the paper about this incident! Thank goodness the pilots used their noggins and implemented emergency procedures!

I heard a person talking the other night on the radio. He said he was not afraid of flying. But he was very afraid of the plane falling out of the air at 3500 feet.

I think what bothers a lot of people is that they do not have any sense of self control in an airplane. Also, if there is a problem, well, the odds of death are pretty high.

Unlike a car where you feel like you have control over it and/or have a reasonably good chance of living if there is an accident, you do not feel that way with a plane.

I have no flown since 2002 but I was never overly concerned about it. I have been fortunate not to have had a bad flight but, then again, I have not flown very often.

Wow...it is things like the tower controller falling asleep to make me stay out of a plane....I stayed away from flying on an airplane considering what happened on 9-11-01 and the fact that flying was and is the same type of experience for me as yours is for you. I did have to put those fears aside 2 years ago when my company flew a co-worker and I to Rhode Island. If the door had not been shut to the small aircraft we were flown in after I was seated, I was set to bolt right out of the plane due to my anxiety of flying! I did make it to RI and back home, but now....I honestly doubt I will ever step on a plane again unless I am handed tickets to see France or Ireland!

and then on the news tonight I saw where they are 'rushing' several thousand new traffic controllers through school...yeah, I feel so much better now..;j

I have never been afraid to fly and my nose is pressed to the window all the way, but it does scare me to think that a person who holds our lives in his hands is asleep. It won't keep my from flying, however. Nothing ventured, nothing gained.

I hate flying....never have I found it to be fun...and I am talking about way before 9/11. Something needs to be revamped with air traffic controllers....we certainly can't have them falling asleep at the wheel...or should I say sky watch?

I hadn't heard about this incident but it ranks up there with the story of the Air India jet that landed in the wrong city (happened more than 10 years ago but this sort of thing sticks in the head).

I have trouble sitting on a tall ferris wheel but no trouble flying.

If I can manage to keep down some crushed Advil I can get some peace and sleep off the rest of the pain. (I can't keep down pills during that time,

I hear you! I don't like flying either, but I do it. I think there is a synchronicity in this post with Reagan and the sleeping air traffic controller. Besides, Reagan fell asleep during important meetings, I've heard.

I thought it was rather ironic too that it happened at Reagan.

if you ask me, flying for the birds

I think everybody should crash at least once. Once you live it's very liberating. Unless you die. But at least then you won't be afraid anymore.