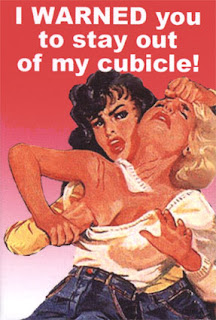 Today is International Women's Day, and the theme is "Equal access to education, training and science and technology: Pathway to decent work for women". Well, I'm all for that -- definitely. That theme almost seems outdated in the 21st Century, because there are more women enrolled in universities than men, especially in the fields of medicine and law. Each country adopts its own theme for International Women's Day, and in Canada the theme today is, "Status of Women: Strong Leadership. Strong Women. Strong World: Equality". I have an idea for International Women's; why don't we start with "Women treating each other as equals, and with respect". This seems to be an area where women fall far short of the mark. In fact, women's behaviour towards each other never ceases to embarrass me. 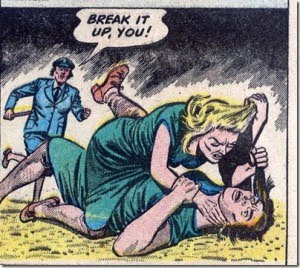 Women have very specific tactics they use against each other, usually involving some sort of passive aggressiveness.  The silent treatment -- shunning -- seems to be a favourite, and it's almost instinctive.  Very little girls use this tactic against each other, and it works even better if they can rally the troops and have everyone give the victim the silent treatment.  Ostracism is a very powerful form of abuse, and women really know how to use it. It's the same form of punishment used by various religious groups to banish one member of the group.

Why do women do these things to each other? Is it biologically programmed into them? It doesn't seem to matter what their level of education, or their hierarchy in the organization, they can be counted on to act like women. For International Women's Day, I would like to see women in the workplace treat each other with respect. That would be an achievement.
Posted by Jo at 8:02 AM

I was thinking of doing a celebratory International Women's Day post but the more I read, I realised that there was little to celebrate. Women in general earn 17% less than men, make up 66% of the world's 170 million illiterates and 30% are survivors of assault. Perhaps if women can stop their own in-fighting, as you say, then they can unite to take on their common enemy. On that day, this squirrel is running for the underground bunker.

LOL at squirrel - we'd probably LIKE you so you're safe :)

I totally agree Jo - I work at a call center & it's like high school! Thank goodness I work in a separate department (for the corporate attorney) or I'd have to wade into the fray just to knock some heads together.

Just the other day Dr. M & I were talking about one of the classes he teaches - there is a core group of women making accusations about cheating. He said it feels like the Salem witch trials all over again.

I have run into this as well but for the most part the women I have worked with did/do treat each other with respect. I think though,the claws come out with women when one feels threatened so they want to bring others down a peg or two.

Lorac made an excellent point. When women feel threatened by other women they tend to attack.

A large part of the problem is low self-esteem. Too many women believe that they are only worth whatever they achieve. That is so not true!

I guess the same applies to having a man. If you don't have one then you are incomplete.

For me, personally, the way to fight this tendency is to put my worth in who God says I am and not in what society says I should be or what even friends might say I should be..

I'm most upset by women's passive-aggressive behavior in the workplace. Now that I'm not working I don't see it any more. I try very hard to be friendly and supportive to everyone I meet. Makes it easier.

I think this is why I've never had a large number of female friends; I just don't have the patience for all of the BS. I recently dealt with a fair amount of the passive aggressive crap and simply cut that relationship out of my life. I feel like Sincerity is right about so much of it being due to insecurity. The more confident a woman is, the less she seems to act like a high school student.

here, here! i make a motion that you be
president of "international women's day"
and teach us some manners!

there's nothing crueler than a cruel woman.

I have seen the worst in female behavior and have suffered because of it but I have also seen the best of female behavior and that I choose to concentrate on and celebrate. My philosophy goes along with the song by Rare Earth "I just want to Celebrate" if you don't remember it look up the lyrics. Since I adopted that philosophy I see a lot more of the best and a lot less of the worst.
Johnina :^A

That's why I focused on working in environments where there were mostly men. So much less hassle.

But there are some men out there that act the same way, just not as many.

I think the behaviors you describe probably originated in competitiveness for a man who would be a good provider for a woman and her children. A scarcity mentality ensures that women will not be friends on a deep level because they often feel a need to beat out other women, or to protect what they have. Jealousy is also a strong motivator because a woman who is smarter and/or prettier will be more successful in the hunt for that good provider, (often regardless of whether he is also a good man.) I have never felt comptetitive with other women, but I am well aware of how it feels when others are.

Nice blog, hi there, i found that there is one website offering free puzzle game. Just take one minute to sign up then you will receive one free puzzle game. I've done it and now i am enjoying it. Would you like one? Enter the below URL to get one:http://www.684899.com/en/CosmicCreature/project_1.htm

Hmmm. I know I have been on the receiving end of this ostracism, more than once in my life. Your post made my stomach tighten, just remembering. But I think I have also tried to fit in by joining them, and that might be true for others who go along, trying hard not to be the target.

Now that I'm retired, I am so happy to be able to choose my own friends and not be exposed to hateful women.

If it were Canadian Office Worker's Day I might agree with you. Not that I've ever worked in a Canadian office.

But I think all the women throughout the world who have to deal with ritual genital mutilation, forced prostitution and honour killings would probably prefer a few gossipy colleagues.

I keep coming back, Jo, to your site because I enjoy the paintings you post and your narrative.

I must disagree, respectfully, with some comments.

I have always (mostly) had good experiences in the workplace with women and men.

I started working in high school as a baby sitter and was never abused by the husbands driving me home at night. (Maybe I was too homely......I was 'plain')

Then I worked in women's clothing stores, so no put-down there. Mostly the men wanted to find something that would make their wives happy.

Then I became a computer programmer in the early days and always worked with males and females who respected my expertise.

Then I dropped out of the paid workforce and have recently found work as a data-entry worker in a small office of mostly females.

I am 25 years their senior and I hear nothing of back-biting or put-downs in the lunchroom.

When I worked as a call-center worker, there was no time for male or female workers to gossip together.

I think, with the downturn of economies, all over the world, that young folks, old folks,....all of us, have begun to hold gentility and courtesy and care for each other.


I can only view the world through my experience/perspective and see that humans in the U.S. are more evolved and gentle with each other, despite ages, colors, genders.

This is the world I always wanted to inhabit.

Keep up your terrific posts.
(I would say "awesome", "amazing"...but those adjectives are the only ones the 'young ones' use now. Back in my day, the words were "cool", "groovy", "right on" or "I hear ya."

Jo, thanks for the great post! I wanted to share a good read on how to deal with these "energy sapping vampires" who take the wind out of you with their exhausting dramas and destructive behaviors... POSITIVE ENERGY by Judith Orloff, M.D. In her book Dr. Orloff recommends zero tolerance. I got rid of a couple of 'bullying so called friends' and my energy has increased significantly! I do hope for women to come together and be 'nice' to each other for the sake of promoting their deserved right of equality.

Girls are so good at picking up all the subtle clues that people give, not like men who are often caught off guard when you point out they aren't the only human in the room, its a blessing and a curse.