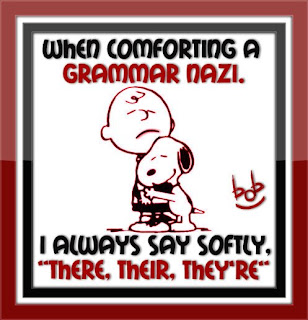 I have a confession to make.  My name is Jo and I am a Grammar Nazi. Yes, I am. I'm not very proud of it, but I am a Grammar Nazi. I come by it naturally, however. When I was growing up, whenever my brothers and I spoke incorrectly, we could hear my father's voice booming from somewhere in the house, "Speak the Queen's English!" I remember when my brother was in his teens, he thought he would be edgy and use the word "ain't". We were all sitting at the kitchen table at the time, and my father brought his hand down on the table, accidentally gave it a karate chop and split the table right in half. One half of the table went east and the other half went west. My brother headed south out the kitchen door and I think he's still running. My mother, who was standing beside the kitchen sink, turned around and very coolly said to my father, "Oh, Harold..." And then we all collapsed into a fit of laughter.

Lately I have been reading some of the CNN, New York Times and Huffington Post blogs regarding various topical issues and current events.  There are some extremely well-read, well-informed, intelligent people out there, and it's fun to read everyone's varying perspectives.  But almost as a constant thread through all of the posts are three of my pet-peeves.  One is "should of", "could of" or "would of".  Think about it.  That doesn't even make sense.  What does it even mean?  The correct way is "should have", "could have" or "would have".  It's easy to see how it happens, though.  In the spoken language, we speak in contractions, so "should have" becomes "should've", which becomes "should of".

I know the English language is fluid and it constantly changes. New words are introduced all the time, and that's the beauty of it.  But I believe the basic rules remain the same, and they do reflect on all of us.  My grandfather used to say that we can fit into any society if our shoes are polished and we speak properly.

My other pet peeve is then & than. I am crazier THAN you, not THEN you. Sigh.

I digress...I'm terrible at grammar but not horrible.

I proudly blame it on my father. He's a Texan.

Yes! There are so many that drive me crazy. Your and you're! I see thst all the time on Facebook. Plus, to, two and too.

I admit I am not perfect. At times I am a lazy writer and do not always catch my mistakes.

Hear! Here! Heeruh! LOL I, too, am a "Grammar Nazi" and I absolutely cringe, like you, when I hear TV announcers use the incorrect word, especially that good ole me/I thingy. Songs are notorious for it simply because they want the song to rhyme! You and I simply must get together so you can tell I - I mean ME all your news! :D

If you're the Nazi then I'm the Gestapo, Jo.

It's not only written English that is being tortured by so many; the spoken words are just as bad at times.

I think the English language is being influenced by the ubiquitous mobile/cell phone and television "soaps". "Text" speak is the norm with many kids and teens. Inability to speak the letter T is also fashionable.
"Is bu-err be-err than margerine?" is difficult to put into written words but it is so easy to say, annoyingly so.

I had the opposite problem with my father. He was always mispronouncing words and using double negatives and ain'ts. I would cringe every time and quietly correct him but he never understood what he was saying wrong.

I too cringe over the misuse of "I" as mentioned here. The "should of" and "would of" thing, I always thought was deliberate to show how the speaker said it, so that doesn't bother me - I think of it more as a novelty of writing. Good post, Jo!

I completely understand! One of the mistakes I am constantly correcting involves the proper use of the comma and/or the semi-colon.

I dated a man who would say "stood" in the context of "I should have stood overnight". It drove me crazy!!! Needless to see I did not date him for long.

Rebecca, you can't blame it on Texan influences... I am a 6th or 7th generation Texan, and poor grammar, spelling or punctuation make me berserk! I actually removed someone from my friends list on Facebook because I just couldn't take her grammar and random Capitalization in the middle Of a Sentence any longer!

Your grandfather was right. I am a grammar nazi too, and all the examples you gave affect me the same way. I confess that my estimation of someone instantly drops tremendously when he or she drops one of those stupid-bombs in my hearing.

I understand much of what I hear or read in French, Spanish and Italian, but rarely attempt to speak any of them because I know my grammar is not perfect and I have a horror of being considered illiterate in any language.

uhhhhhhhhhhh...errrrrrrr...I, ahhhhhh me, believe it best to stay silent; as I am wont to bend grammar to my needs not my needs to it. The Edgar A. Guest school of proper etiquette when destroying grammar rules...

Ain't no use as I can see
In sittin' underneath a tree
An' growlin' that your luck is bad,
An' that your life is extry sad;
Your life ain't sadder than your neighbor's
Nor any harder are your labors;
It rains on him the same as you,
An' he has work he hates to do;
An' he gits tired an' he gits cross,
An' he has trouble with the boss;
You take his whole life, through an' through,
Why, he's no better off than you.

If whinin' brushed the clouds away
I wouldn't have a word to say;
If it made good friends out o' foes
I'd whine a bit, too, I suppose;
But when I look around an' see
A lot o' men resemblin' me,
An' see 'em sad, an' see 'em gay
With work t' do most every day,
Some full o' fun, some bent with care,
Some havin' troubles hard to bear,
I reckon, as I count my woes,
They're 'bout what everybody knows.

The day I find a man who'll say
He's never known a rainy day,
Who'll raise his right hand up an' swear
In forty years he's had no care,
Has never had a single blow,
An' never known one touch o' woe,
Has never seen a loved one die,
Has never wept or heaved a sigh,
Has never had a plan go wrong,
But allas laughed his way along;
Then I'll sit down an' start to whine
That all the hard luck here is mine.

I do so ever much love his writin'

Me and my buddies was disussin that there english buziness jus the udder day!

Yiz, as you cin tell, I is a high schoz gradite and dam prod of it!

Ordinarily, I would of freely commented, but today I fear I may be sent to a grammar concentration camp. I am quite abysmal with grammar, and even worse, do not much care any longer. Oh drat, I haven't shined my shoes since I left the military.

I attribute this crass attitude to a long line of fussy English teachers (who / whom?) took such a sadistic delight in correcting me that I must of developed a masochistic desire to please them. Then again, it may of been one of my science teachers in junior high school. Catching my friend and I chatting during study hall he said:

Youse is a homophone of use, as in "his use of youse was not very becoming of a teacher." Verses use as in "Please use the correct tense."

Guys was spoken with two syllables.

It is one of the few questions that I remember from junior high school.

Another memorable occurrence that may of jaded my desire to use the queen's English was a kickoff engineering conference for a test program that I attended in South Carolina. I was seated in the middle of a conference room. To my right were the good ol' boys from South Carolina (who / whom) was not only the customer but the providing the test facility for our product. To my left were a half dozen engineers from my company in Pittsburgh.

"Yes, but we expect yins to provide the variable frequency drive and power cables.

"Y'all bringing the noise and vibration analyzer?"

"OK, but yins should provide the underwater accelerometers."


Yes, I did intentionally tweak you with replacing the haves with ofs. Any other error you find is not intentional and ergo subject to grammar torture.

Of a nice weekend.

Any more people don't use correct grammar, especially while they lay in the sun. Her and I's jackets are the same. There go my friends; I believe one of them are Catholic.

I salute the word nerd! ;-D I loved your post Jo!

Right you are Jo! When I see "should of" or "could of" it grates on my nerves like the fingernails on the blackboard. Another recurring error in recent years is the use of "loose" when meaning "lose". Or how about "definately" instead of "definitely". The list seems to grow longer every year. Guess I'm also a Grammar (and spelling) Nazi. Cheers, Sharon.

Just last night I was at dinner with my family and my mother complained about the widespread use of "There's a lot of whatever plural noun applies" when the plural would demand "There ARE a lot" instead. This led us to share all of our pet peeves, which could fill a book. One of mine is "Susan gave the book to me and her" or "Me and him went out to dinner last night." Goodness, we need more Grammar Nazis!