Home is Where the Heart Is... 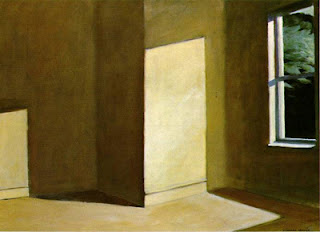 All of my life I have had recurring dreams about walking through empty rooms.  Usually in the dream I have just moved into a new place, and I am walking through it, deciding how I am going to arrange my furniture.  I have had to do this many times in my life, and as much as I dislike moving, I enjoy decorating a new space.  There is something comforting in making a home from an empty place.  It's not the structure that makes the home, but how you add your own personal touch that gives it warmth and brings it alive.

In the recent months, some family members sold their home, a home they had lived in for nine years. Before that, the house had been lived in by the same family since the 1940s. There were trees in the yard that were as old as the house, and the house was filled with memories of both the families who had lived there. There was even a ghost in the attic who made her presence known quite regularly.  It was not just a house - a structure - but a home. It was an old house, but solidly built, and had a lot of life in it yet. However, the purchasers of the house tore it down, and I suppose they will put something new in its place.  That seems to be what has been happening all over the Lower Mainland in the past couple of decades.  Out with the old... 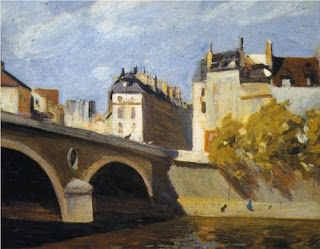 Bridge on the Seine
Edward Hopper, 1909

When my family members told me what had happened, my first instinct was to do what I always do -- make lemons out of lemonade.  "Well, the house is gone, but you have a beautiful place now, so make that your home."  And to be honest, that is really how I feel.  "You can't go home again."  ~~ Thomas Wolfe.  But to see a place, where someone has lived, become a hole in the ground would elicit a very strong type of grief, under any circumstances.  I feel bad the family members had to leave their home quite so soon.  I wish somehow I could have prevented it from happening.  Some things are just so final, you know? But I think about people who lose everything in a fire or a tornado -- every memento, every photo album, everything -- and I go back to my original thought that four walls are just four walls.  Home is where you make it, where the heart is, where folks make tomorrow's memories, starting today.  Life moves forward in a linear fashion; but all the same, it's sad that the old house is gone, and I understand that people will grieve for it.  The memories will remain, though -- good and bad -- albeit bittersweet.
Posted by Jo at 1:49 PM

I too love the space and light and Hopper!

It is awfully sad to see good houses, with lots of character, torn down and replaced by bigger houses, filled with amenities, but often totally devoid of character. I like to think that people are shaped by the space they inhabit.

I prefer older houses, one of a kind buildings with charm and character. But as long as we're making lemonade, it's wonderful that your family members were able to leave their old space and continue their journeys in a new place, unlike the lives lost in a fire, tornado, earthquake, hurricane, or an event like 9/11. Something always has to be sacrificed for growth, so let's rejoice that it was a building and not a person or animal destroyed. If that sounds cavalier, it isn't meant to. I truly love old homes and am saddened when they are ripped from their moorings and replaced with modern houses which are uninteresting at best.

Oh no! It was a gorgeous home! I know just how they feel...

Wow ! Felt like reading my mother as I was moving out of the house . I am sure this is what it must have felt like . Like home .. I think home is a space in your heart . For me home was my memories ..with mom . I miss her now . She is so far away . I gonna give a call and say I love her cos I read a wonderful blog about home ! :) thank you

Dreams like your Jo are probably caused by heartache. Something that you long for and keep looking for - but only in your innermost heart and mind. Sadness, sometimes, is the driver, the guide and the searcher.

I have a recurring dream, or nightmare, of being totally lost in a building I once knew intimately.

Last night I remember frantically trying to find a basement room in this office block but all the lifts I used took me everywhere except the basement. I was scampering from lift to lift and getting nowhere. I ran down flights of stairs but exhaustion made me resort to the lifts again.

I never found the room I was seeking. It was strange.

This office building was where I worked for some years. Most of that time was a real struggle to keep up with the demands of the job.

I doubt I'll ever be rid of this dream.

I remember when that boom hit Mississauga where my wife's relatives live. People buying two, three houses to tear down and build McMansions in their place. Good lord did the prices skyrocket!

It takes a heap o' livin' in a house t' make it home,
A heap o' sun an' shadder, an' ye sometimes have t' roam
Afore ye really 'preciate the things ye lef' behind,
An' hunger fer 'em somehow, with 'em allus on yer mind.
It don't make any differunce how rich ye get t' be,
How much yer chairs an' tables cost, how great yer luxury;
It ain't home t' ye, though it be the palace of a king,
Until somehow yer soul is sort o' wrapped round everything.

Home ain't a place that gold can buy or get up in a minute;
Afore it's home there's got t' be a heap o' livin' in it;
Within the walls there's got t' be some babies born, and then
Right there ye've got t' bring 'em up t' women good, an' men;
And gradjerly, as time goes on, ye find ye wouldn't part
With anything they ever used -- they've grown into yer heart:
The old high chairs, the playthings, too, the little shoes they wore
Ye hoard; an' if ye could ye'd keep the thumb marks on the door.

Ye've got t' weep t' make it home, ye've got t' sit an' sigh
An' watch beside a loved one's bed, an' know that Death is nigh;
An' in the stillness o' the night t' see Death's angel come,
An' close the eyes o' her that smiled,
an' leave her sweet voice dumb.
Fer these are scenes that grip the heart,
an' when yer tears are dried,
Ye find the home is dearer than it was, an' sanctified;
An' tuggin' at ye always are the pleasant memories
O' her that was an' is no more -- ye can't escape from these.

Ye've got t' sing an' dance fer years, ye've got t' romp an' play,
An' learn t' love the things ye have by usin' 'em each day;
Even the roses 'round the porch must blossom year by year
Afore they 'come a part o' ye, suggestin' someone dear
Who used t' love 'em long ago, an' trained 'em jes' t' run
The way they do, so's they would get the early mornin' sun;
Ye've got t' love each brick an' stone from cellar up t' dome:
It takes a heap o' livin' in a house t' make it home.

A thought-provoking post Jo, and I loved your selection of paintings!

I have similar dreams about rooms. I've always wondered what they mean. As for losing a home, when I was 14, my family lost everything in a fire and while the loss of so many things at once was undeniably traumatic, as time goes by, you're right -- walls are just walls, and things are just things. Nothing can take away the memories, and in the end, we realize that those memories are much more precious than any possession could ever be.

I am with you, Jo, in part, but also with Bruce.

Friends have said, "Your apartment looks so much like where you lived in your house." Well, yes. It is rich with the gifts of friends and family, shaped by the antiques from parents of my parents' parents, and from the tastes of other times. Punctuated by bits of every time since, as well.

So I am surrounded by love and by warmth wherever I may move.

But I miss the gardens I dug with my own house, adding layers beyond the walls. I miss the light hitting the kitchen window, just so, hurling rainbows through my living room. I miss the sounds of settling wood and beams. The way the hall floor slanted to the stairs, so that two-year-old hunter put a marble down and squealed as it rolled away ten feet, and bounced down the stairs.

The house was only forty-five, but it was aging so well. I miss the nook off the studio room. Sunny all year, big enough for dropleaf desk and easy chair.

Yet I look around me now and feel warmed as well. I guess I'll be conflicted for times to come. There is much to be said for letting go, for ease at this time of my life.

I miss my house and the freedom to paint my walls purple or yellow or brighter than the peonies that lined the front walk.