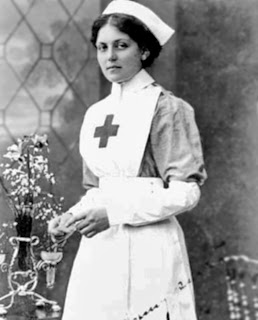 The story of the RMS Titanic is one that has always haunted and fascinated me. The Titanic set sail on her maiden voyage 100 years ago on April 10, 1912. There were 2,435 passengers on board, and a crew of 892. Of those people, only 710 survived. One of those survivors was a woman named Violet Jessop.  She was born in Argentina, to Irish parents who had emigrated to the Argentine.  When Violet was a young child, she contracted tuberculosis and was not expected to live, but despite her grim prognosis, she survived the disease.  Later, she and her family returned to Great Britain, where she continued her schooling in a convent, until at the age of 22, she hired on to the RMS Olympic to work as a stewardess.  On September 20, 1911, the Olympic collided with HMS Hawke, resulting in the Olympic almost sinking.  The ship managed to make it back to Southampton without any casualties.

On April 10, 1912, Violet Jessop boarded the RMS Titanic, a sister ship of the Olympic, again to work as a stewardess. She was one of only 23 female crew members aboard the ship.  Four days later the Titanic collided with an iceberg, and Ms. Jessop was ordered into Lifeboat No. 16, and as the Titanic plummeted 2-1/2 miles down towards the ocean floor, Violet was one of the only 710 people who survived the disaster.  While she was in the lifeboat as it was being lowered, someone handed her a baby to look after.  The next morning on the Carpathia, a woman grabbed the baby and ran off with it. Years later, Violet Jessop received a telephone call from a woman who asked her if she saved a baby on the night the Titanic sank. "Yes," Jessop replied. The voice then said "Well, I was that baby," and hung up. 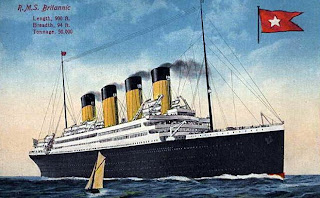 Violet served as a nurse for the British Red Cross during the World War One, and she was stationed on board His Majesty's Hospital Ship Britannic, another sister ship of the Titanic, when the ship struck a mine and sank in the Aegean Sea. Violet was in a lifeboat, but she jumped overboard to avoid being sucked into the Britannic's propellers. She nevertheless went underwater and struck her head on the ship's keel, and then resurfaced. She later said that her first priority in abandoning the Britannic was to rescue her toothbrush, which was the one thing she had missed when the Titanic sank.

Violet Jessop lived until 1971.  In the movie Titanic, James Cameron created a fictional character named Lucy, based on Violet Jessop. She is the stewardess setting things up in Rose DeWitt Bukater's stateroom. Later on, when the ship starts sinking, she is told to put on her lifebelt "to set a good example". The real Violet Jessop was also told to do this, but unlike her real-life counterpart, Lucy is not rescued. 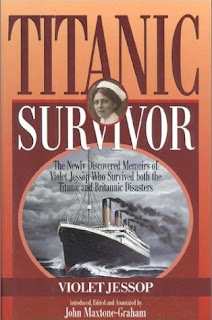 Violet Jessop wrote her memoirs, entitled "Titanic Survivor".  Among the legion of books that emerged from the Titanic craze precipitated by James Cameron's 1997 film, "Titanic Survivor" towered above the rest due to its unique authenticity and wrenching firsthand account of that unforgettable tragedy. Violet Jessop spent her entire career--and fully half her life--at sea. She served as a stewardess for first-class passengers aboard the Titanic, and was a nurse on the ill-fated hospital ship Britannic when it struck a mine and sank in the Aegean Sea. She went on to write this riveting eyewitness account of both disasters, weaving into her story many fascinating tales of fellow stewards, wartime alarums, impossible passengers, philandering shipmates, exotic ports, and tragic deaths. Her powerful memoir grants the reader a unique vantage point that could only come from a survivor. ~~ Amazon Books. I'll be checking out the local Chapters Indigo store this week, to see if this book is available.
Posted by Jo at 1:29 PM

Geez, when it's not your time to go...
I could never have gotten back on a ship after the first accident let alone a second, then to go down a third time, amazing.
I think I'll have to look for this book.

Was her middle name Jonah, per chance?

Fascinating! I'll have to check that book out.

What an interesting story! Thanks for sharing it with us. I've not heard of Violet Jessop before today and I've put a hold on this book at my local library.

I've never heard of her before. It's a wonder she wasn't reviled as a harbinger of doom. Did she ever find out if the person who snatched the baby from her was in fact the child's mother?

oh, i love this "the rest of the story."

Wow! How interesting. I shy away from the Titanic story because I am obstinate and I don't want to go with the flow. . . this interests me though!

Brilliant Jo! Great research and so interestingly informative.
Thanks.

As is so often the case, truth is stranger than fiction.

The story of this woman is certainly an example of that!

Wow, I too have always been fascinated with Titanic. I recorded the new doc. on History this past weekend. Can't wait to watch it!!

What a great story! I have seen the movie at least 10 times and know the maid well. Very interesting. I will have to order the book an Kindle!

I think I have overindulged on all the Titanic stories and hype that was stirred up again after James Cameron's movie but this was still a very interesting story that you have told in this post on Violet.

It is fascinating and I am going to seek outhe book to read. I couldn't watch the film again but I would love to do some more reading. Great and very interesting post.

My wife and I just went to see Titanic one more time. It continues to fascinate me, haunt me, and does such a great job of exposing the history of the times.