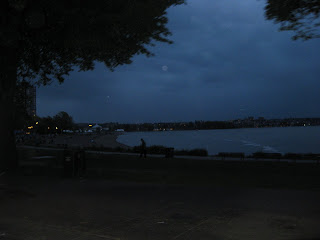 I went for a wonderful dinner with my family on Sunday night, and as we were driving back from the restaurant, I snapped these pictures of English Bay in twilight. I wasn't sure if they would turn out, but when I uploaded them to my computer, I was pleasantly surprised. If you look closely, (click on them to enlarge them) you can see the full moon hiding behind the clouds. The pictures are quite dark, so I hope you can see them. I thought the bay looked rather mysterious in the twilight. 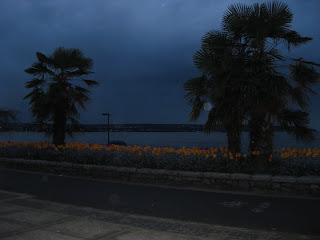 English Bay is my favorite part of Vancouver. It's surrounded by the West End and Stanley Park, North and West Vancouver, and Kitsilano. When I first moved to Vancouver, I thought English Bay was the most beautiful place I had ever seen, and my daughter and I lived close to the beach for several years. In the fall, when all the tourists had gone home, we used to go to the beach and gather driftwood to burn in our fireplace. 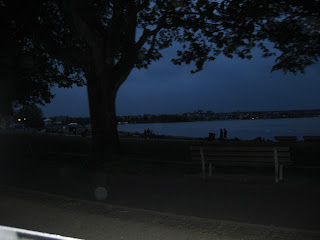 English Bay is usually very placid, and there are several beaches along the bay that are very popular with Vancouverites and tourists -- English Bay Beach, Sunset Beach, Second Beach, Third Beach, Kitsilano Beach, Jericho Beach, Spanish Banks, Locarno Beach and Ambleside Beach. In the summertime they are all packed with sunbathers, and folks swimming, having barbeques and playing beach volleyball. 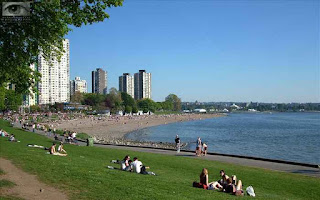 My photographs are very dark, so I have added one that I borrowed from the internet, so you can see English Bay in daylight. Occasionally Vancouver gets hit with typhoons that roll in off the Pacific Ocean. A couple of years ago many of the old growth trees in Stanley Park were decimated by a huge typhoon that slammed into them. It looked as if someone had gone through there with a giant lawnmower and mowed them down. It was devastating. When that happens, English Bay becomes wild, with huge waves. I remember the day my husband was killed in a plane crash, Vancouver was in one of those windstorms. I was a little bit in shock, and I went for a walk along English Bay. Branches from trees were flying, the waves were pounding on the store, and there was one other person out for a walk as well, an elderly gentleman. He said to me, "Young lady, you should not be out here in weather like this. Someone could get killed." The irony was not lost on me. 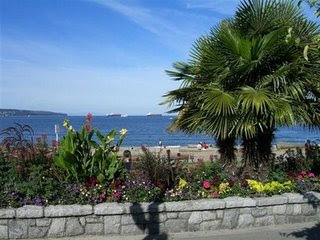 And yes, those are palm trees in that picture. Most people think of Canada as the land of ice, snow, sled dogs and snowshoes -- but Vancouver is 1,327 miles away from Anchorage, Alaska and only 799 miles away from San Francisco, California. In the winter months we are warmer than most of North America, and in the summer months we are often exactly like Hawaii. This is a picture I took last fall, on one of my visits to English Bay. Whenever I need to get rid of the cobwebs in my head, I go for a walk along English Bay. I could never live very far away from it, and for me it will always be home.
Posted by Jo at 7:03 AM

I like the photos..dark...but the blue is so pretty

Wow, Jo, what an ironic thing for that man to have said to you. I would have lost it completely.

I hate to see beautiful old trees torn down like that, but if it's in an act of nature it's somehow more ok. I don't think I'd think that if a storm took my husband though. Or maybe I would. I guess we never really know how we'll react in that situation, do we.

We were sailing along.
On English Bay....

How lovely. You really do live in on the most beautiful cities.

Wow, that's beautiful. I saw the moon right away even in the small pictures, but I am always looking for the moon :-) I wonder what that says about me. You know, Jo, I never had any desire to go to Canada before I started reading your blog and now I'd really like to go see it!

Like LP, I now have a desire to visit your neck of the woods.... I have been to Canada, having lived in Minnesota we took a drive across the border and I was disappointed. Looked like Minnesota to me. Well, duh, we ventured just across the border.....

english bay looks like a lovely place to wander and think about the world......enjoy, jack c

Mmmmm, very nice. Someday I hope to make it to Vancouver.

I could easily live there! Thanks for sharing your beautiful bay.

I'm so sorry about your husband. The irony that statement..

A very lovely post Jo. I loved all your pics. I feel the sea, the shore, the bay.

The similarities Vancouver and our area of the Pacific Northwest share are many. I too, do not want to live far from this most lovely spot on earth.

Like you, my history and memories are so intertwined with where I live , and although that sometimes is heartbreaking, it is also healing. Good post, thanks Jo.

I also loved going to English Bay when I lived in Vancouver. It was usually combined with a visit to Stanley Park. One wonderful thing about that city is you always have a beach nearby. When my children were very small we'd go to Kitsilano beach or Spanish Banks. We took it for granted that you could just hop down to the beach for a stroll or an afternoon sitting on the sand, no matter in what part of the city was your home.

Is that really a row of golden tulips in your second photo Jo? I love your dusky photos. I'm glad to see all there is still very clean and well kept.
Cheers, Sharon.

I agree with scarlethue ... what that man said to you on that particular day was very ironic (to put it mildly). I cannot imagine dealing with something like the shock of hearing news like that.

And for the weather to be as it was - stormy, unsettled, unpredictible, dangerous - seems to be appropriate given the situation you had been thrown into.

I think your images of English Bay are much better than the one you borrowed from the internet - much, much better.

Beautiful, beautiful scenery. There's something very comforting when one finds a special place that can be claimed as their own.

I like your pictures of the bay better...so beautiful!

PS: Russell is looking pretty cute there on your sideboard :) I like his new pic...LOL

Have a Happy Day, Jo!