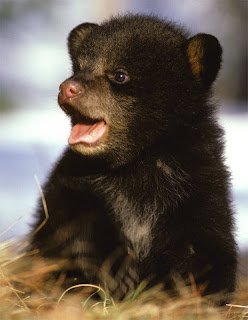 When I was a little girl, my father adopted a baby black bear cub whose mother had been accidentally killed by loggers. The baby bear cried just like a human baby. There are, in fact, urban legends of black bears showing maternal concern when they hear the crying of a human baby, their cries are so much alike. My mother used to feed the baby bear from a baby bottle. It's that time of year again, when the bears wake up and head off in search of food. Vancouver has encroached on the bear population, especially on the North Shore Mountains, and the bears consider outdoor garbage cans, bird feeders and pet food dishes as their veritable smörgåsbord.

"Oh, look, Hank, the humans have left food out for us again. They must like us."

"Well, I guess that's because we're so cute."

The bears in the North Shore Mountains of Vancouver have -- for the most part -- lost their fear of humans. There have been a couple of instances recently of bears swimming across the Burrard Inlet and walking around the City of Vancouver, one in an elementary school playground. It was finally caught by conservation officers in the 2100 block of Franklin Street, and it was tranquilized and released into the wild.

If you encounter at bear remember the four S’s -

And yes, bears are cute. If you want a chuckle, check out these bear cubs captured on video a couple of years ago in North Vancouver. It's a common sight. Altogether now -- awwwwww....

Wow, SO cute.I have never encountered one,but I will remember those.A bear cub?thats so awesome!Did you release into the wild?How long did it stay with you?

Miss_Nobody, we nursed it until it was stablized, and then we gave it to the game warden. It was so tiny, and so cute!

Teddy bear...would've been gr8 if it could remain cute n cuddly 4ever :-)

I often thought that I would never encounter a bear, but one was just filmed in some one's backyard about 20 miles from here. The black bear came down from the Appalachian mountains. The foothills are not far from where we live. All in all, I think I can live withough seeing a bear up close.

Unfortunately the arrogance of us humans has led us to lose respect for the wild creatures of this earth and then we are shocked and outraged when they attack and kill when we trespass onto their territory. We often see that in South Africa. Even though people are warned to stay in their vehicles when driving through Nature Reserves, they ignore it and leave the safety of their vehicles. When will they learn that the animals were here first?

Hi Jo, it was wonderful to take a little paws just now with a cuppa real coffee to read your story here... we need more bears on this planet... and more whales too. There are no wild bears in France, the last one was killed down in the Pyrenees quite a while back I think. I hadn't realized that you're in Vancouver until now, was wondering if you are familiar with Fred Herzog ??? Some of his beautiful Vancouver photos are on this website :

Teddy was the fourth word my son was able to say...thank you for that story; he's now asleep, as it is five past two in the morning and I just went to see how he's doing - thank you for providing me with this ___ -feeling!

What a sad story. The poor Mother and cub. I have never seen a bear outside of a zoo, but I have heard horror stories from family friends. I just hope the bears don't get too brave, or they will all end up extinct.

Bears are wonderful creatures! I had the great pleasure to be educated about them and their habitat last year when I wrote an article about them for a local newspaper. According to my source, MassWildLife, "they live to eat," and no wonder, as they love to forage back yard bird feeders, which in my area are abundant. I never knew that until I did the interview with a wildlife specialist. Bottom line: It's a case of two species - fighting for dominance and survival in a geographic area.

Sounds like Canadian bears are a bit tougher than the ones we have here in Pennsylvania. I live in a fairly wooded area and so not surprisingly there are many bears around. They are like the deer and the squirrels in that they are wildlife that has learned to coexist with humans, even to thrive in our presence. The biggest danger is to get anywhere a mama bear and her cubs (they are fiercely protective of their young) but otherwise they tend to ignore us and go about their business of foraging for food, which does include birdfeeders and the occasional bag of trash. I have heard stories of bears figuring out how to open front doors and walking in to peruse kitchens.

I was sitting outside eating my dinner one evening in early fall a few years ago when a bear walked past me a few feet away. I decided to take myself and my dinner inside. The bear proceeded to climb up the crab apple tree and shake it to get some of the fruit to fall off.

Great post, Jo. Bears are beautiful and magnificent creatures, but people have a tendency to underestimate them in terms of their power and dangerousness. I'm working on a post about a book I've just read about a man who did just that, and lost his life.

Divyendu, yes, but unfortunately they grow up to be bears ... growl. :-)

Deb, yes, I certainly don't want to be anywhere near them. :-)

A Human Kind of Human, goodness, yes! We have to respect their territory. We've taken enough of it from them.

Owen, yes, I LOVE Fred Herzog. I did a post about him once, about the similarity of his work to the wonderful artist Edward Hopper.

Mo'iheka, awwww, that's so cute. He must love his teddy. I'll bet Dada was his first word. :-)

Arley, well, fortunately they are not becoming extinct here in BC! :-)

Paula, yes, and part of me hope the bears win, well, at least in their own territory. :-)

Alissa, yes, when they come down into human habitat and they have their cubs with them, they can be extremely dangerous.

Deedee, I think I know the book you mean, about the fellow who lived with the Grizzlies. Foolish man!

Interesting video - I kept wondering where Mama Bear was all that time.

What a privilege to have been so close to nature and even nursing a bear cub. As a potential tourist, I would love to see these bears close up on a visit to Vancouver.

You're right, the bear cubs are sooooooooo cute! We have a lot of bears here too ( we are not too far south of you ) and the same problems. It does a person well to respect the power of bears and remember they are NOT human and do not think like us....and then respect them for the amazing animals they are.

Well pretty soon all the wild animals in existence will be in zoos, sedated and harmless so we can enjoy them in safety on a Sunday afternoon when we drive in from our McMansion in the suburbs in our SUV. It will certainly be a relief not to have to worry about those creatures in OUR backyards.

we keep intruding on bear habitat and the consequences will be bad for both us and the bears. same thing with mountain lions and other wild animals. not to mention bigfoot and ufos...heehee. take care, jc

Aww.. so cute. And they looked almost human when they stood up and used their paws like hands.

What a wonderful animal, eh? I'm impressed that your family took care of a cub. That's not nearly as easy as my raccoon kits! ;)