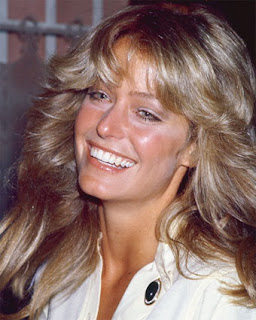 Is there anyone who doesn't love Farrah Fawcett? For anyone who watched her in her iconic role in "Charlie's Angels" during the 1970s, she was very sweet. One got the impression that she was just as lovely in real life as the part she portrayed in the TV series. She made some errors in judgement, however, and her career never took off. She was always known for that role, and for her famous poster. In "Charlie's Angels" Farrah always beat the "bad guys" without ever mussing her famous "Farrah" locks. Now she is doing battle with a foe that it would appear she cannot beat, and she has tackled it with the same grace and dignity with which she has lived her life. She has made a film of her journey, and tomorrow night NBC will air this documentary of Farrah's well-fought battle. I hope everyone will say a prayer for her and wish her God speed.
Posted by Jo at 8:17 AM

What has happened to her? got sick or something?

Nerissa, she has terminal cancer, and is in the final last few days. She has battled it for 2-1/2 years.

That picture is exactly how I will always remember her. It reminds me of those days of wine and roses.

LoverOfLife, yes, that is how I will always remember her too.

I have always loved Farrah...she did a few good movies too...The Burning bed...it is a shame what she is going through...still beautiful

Deb, she was a really good actress, and should have had a much better movie career than she did.

Loved her in Charlie's Angels, but you are right, she was a fabulous actress. Always wanted her hair, didn't everybody, though? I saw a snippet of her documentary on the Today show and I am not sure I can watch it in my current state. Maybe I will DVR it and watch it when I am closer to normal.

It is an awful thing...and I wish for her that she can win this.

Kathy, gosh, I hope everything is okay with you!

Kimberly, I wish she could win it too, but it is not looking hopeful.

Do you remember her in "The Burning Bed" and that other TV movie about the mother who had a Down's syndrome child? Farrah really could act, even if it's Charlie's Angels that we mostly remember her for. I really feel for the struggle she's had, but I pray that her final days will be peaceful and pain-free. Poor woman and poor Ryan O'Neal and her son Redmond.

Yes. I feel bad for her with the press releasing her private medical records. She should not have to go through that.

Leslie, yes, she was a great actress, and she never really made it onto the big screen.

TheChicGeek, yes, whomever did that should be fired (I think they were...!) and then be forced to do community service for a whole year. How disgusting was that!?

It's very sad that she is struggling with such a dreaded disease. The picture you posted of her is lovely and so full of life - that is how I will always think of her.

Paula, yes, I think that is how we will all think of her. I hope she is not suffering. Gosh!

Anyway, she is very beautiful an actress guess...charming...

What is she trying to accomplish by airing this documentary? I don't get it. Are Ryan and the family making money due to her illness?
somebody tell me because I don't understand.

I have never really cared for Farah--although I thought she did a good job in "The Burning Bed." But, my heart goes out to her for all the struggles she has been through. I would not have the courage that she has shown. So, she is an example to us. D

Nomore, yes, and she was a good actress too.

Donnetta, yes, I think she has been through a lot -- with her son and now with her illness.

Every man wanted Farrah and every woman wanted to BE Farrah. Her cancer is somewhat of an unknown entity, I think the documentary was meant as a way to make people more aware. If it's a way for her also to make money, so be it. I kept wishing she would find a way to make mincemeat of that dreaded cancer.

Lovelyprism, I don't think Farrah is concerned about the money. From what I understand, she wanted the document to be a journal of her fight, because she honestly thought she was going to win it. It has not turned out that way, however.

I grew up watching her and loved her hair! My husband and I watched the show last night on NBC and my heart was breaking for her and for Ryan. He loves her so. I was so glad to see that she was able to be with her son, too. It was a very sad thing to watch yet I admired her courage and stamina.