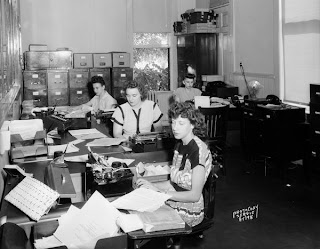 If any of you ever watch "The Office", I'm sure you must occasionally wince at the reality of it. The office where I work -- like every other office -- is very similar to the TV show, the only difference being that I work with mostly women. Being in a large group of women can often be difficult at the best of times, but for the most part they are an extremely nice group of people. 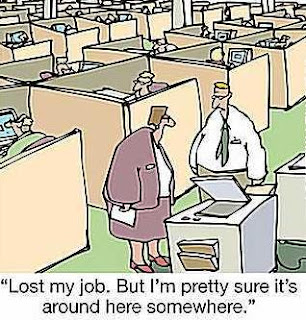 We recently had a team of efficiency experts come through our office to make some improvements. In my opinion, all of the improvements were good. I like efficiency -- it's a good idea to cut away unnecessary paperwork and redundant work. Sometimes processes build up over months and years until they don't make any sense anymore. And then the mantra becomes, "That's the way we've always done it", or "That can't be done", when someone asks why or how. Something completely ridiculous becomes written in stone -- just because. It often takes an outsider to look at the system and suggest changes. Usually the changes are positive, if people follow them. But often what happens is that, once the efficiency experts have left the building, the folks in the office "tweak" the new processes and things become cumbersome and redundant again. The thing that makes sense to one person is completely illogical to someone else, and in the frustration tempers start to fray, and people become annoyed with each other.

"But why are you doing it this way? That's not what the efficiency team suggested. Did you tell anyone you decided to change it?"

The efficiency team pays a visit a few weeks later, wonders why none of their suggestions are being followed, and everyone is in chaos again. I think in some respects every organization must be the same way. Whenever groups of people are working together, not everyone is going to agree with each other all the time.

I think it's time for the folks in our office to have a pizza lunch, where eveyone can kick back and relax for a while. All work and no play...
Posted by Jo at 9:47 AM

Oh dear,what was done to improve the situation actually backfired,and is it that people are oscillating somewhere between the old and the new?Bond over pizza,before things start to get worse,heh sounds great.And coke!Munch,munch yummy :)

Miss Nobody, yes, time for pizza! Time to tie up some of the frayed ends. :-)

My wife loves that show. Never having worked in quite the kind of environment I often don't quite get the humor. But I lik parts of it.

I have often used the phrase "it must have looked good on paper!"

In reality, things usually revert back to the same over time. I am old enough to have seen most of the "new and improved" changes people have come up with! Nothing seems to beat the tried and true -- but try to tell that to a 26-year old kid with a masters degree in design or whatever!! Heh!!

(They eventually learn what really works when they grow up!)

the only thing thats permanent is a permanent state of change... so frayed ends are jus a way to show our insecurity under unfamiliar circumstances...

people need to get more flexible and adoptive in their attitude....

Where I work, office politics have descended to the level of crocodile luncheons in a muddy river with passengers from overturned canoes as guests of honor. The current crisis is turning people particularly reptilian, venomous reptilian at that... Tarzan, throw me a line ! (I'm not sure the crocodiles are ready for pizza yet !)

Thanks a million for your more than kind comment this evening, and for adding me to your list of blogs !

I work for an efficiency consultant. You're right, an outsider is just what some people need in order to revamp their processes. Funny thing is sometimes I think our office needs an outside consultant too!

it's all good in theory and would make an office incredibly efficient, however it just takes one person who decides to do it differently and brings it to a dead stop.

That is what I have noticed in my office.

Muthu, most people are really afraid of change. They like to stay with the "familiar".

Owen, "crocodile luncheons in a muddy river with passengers from overturned canoes as guests of honor." Omigosh, I love it! Yes!

Ruth, "it just takes one person who decides to do it differently and brings it to a dead stop." And it's usually always the same person, isn't it!?

...And this is exactly why I loved being an auto mechanic, give me the repair order then get the hell out of my kingdom. Within the confines of my repair bay I am god and no mere mortal shall intrude on my authority.

Oh my goodness what an intelligent, and simply amazing post. Having worked in lots of offices in my time, I can tell you that you are absolutely spot on!

Jo, you have effectively reminded me of all the reasons I have been self employed for so many years - corporate culture! :D