The Life Of A Frog 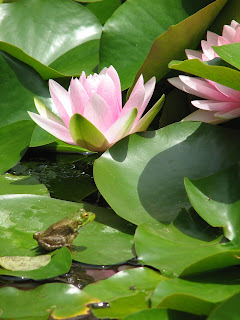 I read today on CNN that a recent study identified between 129 and 221 new species of frogs on the island of Madagascar. According to the scientists who carried out the study, this could practically double the number of amphibians known in the world. Well, I'm happy about that. I happen to be very fond of frogs. The more frogs we have in this world, the better, and I love the sound of frogs on a warm spring evening. I had a couple of pet frogs when I was a child. My parents had two lily ponds -- one in the front yard and one in the back -- and the ponds were stocked with dozens of water lilies, carp and frogs. My brothers and I used to feed the carp and the frogs by hand, with insects from the compost heap at the back of the garden. When I was in Biology 11 in high school, I was devastated that part of our curriculum was to dissect a frog. For some reason, frogs make me laugh. A few months ago I read a wonderful article in the New Yorker Magazine, and I kept it because every time I read it, I chuckle. So I have shamelessly borrowed it from a back issue of the magazine to share with you. The humor is a big macabre... but imagine, if you will, that you are a frog. 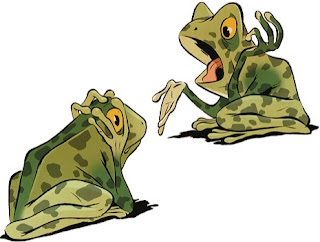 “Hey, can I ask you something? Why do human children dissect us?”

“It’s part of their education. They cut open our bodies in school and write reports about their findings.”

“Huh. Well, I guess it could be worse, right? I mean, at least we’re not dying in vain.”

“How do you figure?”

“Well, our deaths are furthering the spread of knowledge. It’s a huge sacrifice we’re making, but at least some good comes out of it.”

“Let me show you something.”

(Flipping through it.) “This is it? This is the whole thing?”

“Geez. It doesn’t look like he put a lot of time into this.”

“Look at the diagram on the last page.”

“Oh, my God . . . it’s so crude. It’s almost as if he wasn’t even looking down at the paper while he was drawing it. Like he was watching TV or something.”

“ ‘In conclusion, frogs are a scientific wonder of biology.’ What does that even mean?”

“It doesn’t mean anything.”

“Why are the margins so big?”

“He was trying to make it look as if he had written five pages, even though he had only written four.”

“He couldn’t come up with one more page of observations about our dead bodies?”

“This paragraph looks like it was copied straight out of an encyclopedia. I’d be shocked if he retained any of this information.”

“Did you see that he spelled ‘science’ wrong in the heading?”

“He didn’t even bother to run it through spell-check.”

“Who did he dissect?”

(Nods.) “This is why his life was taken from him.”

“Well, at least it has a cover sheet.”

great post....frogs, toads salamanders....you just don't see as many today. are we killing them with our trash? good to see there are still some places that remain ''untouched''....bye 4 now, jc

I love frogs too... in fact, I'm married to one ! And nobody is going to dissect her either ! Over my dead body anyway. There was a story in a very recent National Geographic that is required reading for all frog lovers... discussing a fungus that is killing off large numbers of frogs. Thanks for, umm, borrowing this New Yorker piece.

You've given me a giggle, JO :D LOL
Thank you! I like frogs too, just don't kiss them...LOL

Have a Happy Day!
xox

the last conversation had a nice ring to it....

it was sardonic and meaningful.. :)

Even when I became a prince, I couldn't lose that off-putting habit of using my tongue of still impressive length and snagging a Mayfly now and then.

In high school I refused to dissect the frog - I failed that particular assignment but my conscience is still clear...

We never dissected real frogs. It was all done on the computer... Poor froggies!

I love frogs too. When I was a kid they were everywhere. Nowadays I don't see many at all. Disturbing, since they are an indicator species, predicting the health of the planet. In school, we could choose to opt out of the dissection, which I did.

I like frogs too - they had big ones and really tiny ones that would hang on our windows in Minnesota. But then they the would just invade, and be everywhere! All over the driveway - we couldn't avoid them. I always felt bad because they were so cute.

In Australia they have Cane toads, which are about as big as you.
Like some ggrressive walking catfish in Florida, they have been known to chase you and fight your dog.

When we were kids, there were ditches in Richmond and we'd be out there with our homemade frog catchers - narrow boards with a tin can nailed to the end of it. We'd catch frogs and tadpoles and anything else we could find. However, we treated them really really well and took care of them before putting them back in the ditches. We learned a lot that way. I didn't take Biology in high school partly because of the dissection thing, but also because we had to study snakes as well. ICK!

We have some really huge frogs living in our pond here at the campground. After a heavy rain they will wander into the park and sometimes in the swimming pool. I patiently remove them with the net and send them on their way. I love frogs and have froggy gee gaws displayed in my gardens.

I have frogs here, too. My grandchildren go searching for them in the spring, but you don't have to go farin this dessert climate 'cause they will be living right under faucets. We love them.

it was always fun to dissect frogs. but they used to stink, and we weren't allowed to wear rubber gloves during dissection.

The New Yorker article - what a hoot! I used to have pet frogs too - I kept them in a terrarium. One little guy used to love perching on my shoulder while I tidied up his home. :)