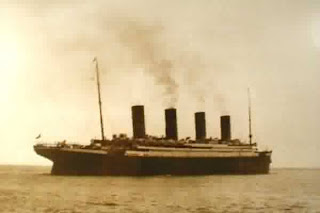 This is the last photograph of Titanic, prior to its sinking, taken as it was sailing out of Queenstown, Ireland, and into history and eventual doom, April 11th, 1912 @ 1:32pm.

I have always been fascinated by the Titanic. The other night as I was flipping around the channels looking for something to watch, I came upon an amazing program on the Knowledge Network, called “The Man Who Found the Titanic”, and it was the story of Dr. Robert Ballard, the marine archaeologist who found the debris field of the Titanic. The story of how the Titanic was found is interesting, involving the Cold War and the U.S. Navy's search for two Navy nuclear powered submarines, the USS Scorpion and the USS Thresher, both of which sank in the 1960s. 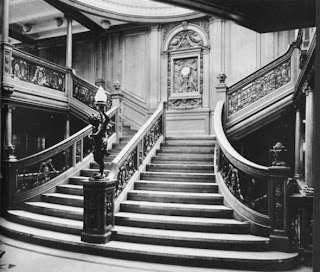 Dr. Ballard approached the Navy about his new deep sea underwater robot craft, the Argo, and his search for the Titanic. The Navy however was not interested in spending a large sum of money in searching for the large ocean liner, but they were however, very interested in finding out what happened to their missing submarines and ultimately concluded that the Argo was their best chance to do so. In an agreement made with the Ballard, the Navy would finance Ballard's Titanic search only if he first searched for and investigated the two sunken submarines, and examined the state of their nuclear reactors after being submerged for such a long period of time to see if their radioactivity was impacting the environment. Ballard would be placed into temporary active duty in the Navy and in charge of finding and investigating the wrecks. After the two missions were completed, and if time and funding were permitting, Ballard would be free to use the resources to hunt for Titanic. 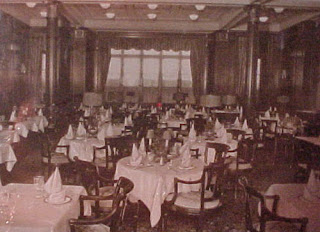 Ballard understood the ocean currents would create trails of debris that would make it easier to find the submarines rather than searching for the hulls. Following each of the submarines' large trails of debris led Ballard and his team directly to them. He knew, as well, that the Titanic had probably imploded from pressure depth, much the same way the two submarines had, and concluded that it too had left a trail of debris. Ballard and his team used Argo to sweep back and forth across the ocean floor looking for Titanic's debris trail. The team took shifts monitoring the video feed from Argo as it searched the ocean floor two miles below. ... The Knowledge Network. 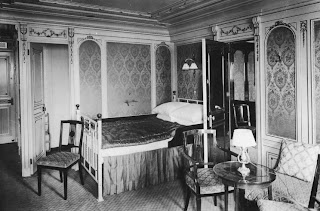 Even by today’s standards, the Titanic was luxurious. Items and artifacts from the Titanic are at a premium, because of the mystique of the ship, and the opulence of the furnishings. In many ways, Dr. Ballard regretted locating the ship because in the years since 1985, Titanic has been pillaged, and in fact more damage has been done to her from artifact hunters than from the erosion of the Atlantic Ocean. He also believes that the location is sacred ground because so many men, women and children lost their lives there. He says when he visits the wreckage, he can still feel their spirits.

The story of the Titanic is one that will always fascinate people, and I think as long as the artifacts are regarded with the proper reverence, people should be permitted to view that important part of maritime history.

Here is a bit of Titanic trivia. Titanic had four smoke stacks, but only three of them were operational. The fourth stack was added to balance the lines of the ship, and make the other smoke stacks not look out of place. Without the fourth stack towards the back, she would have looked top-heavy. The fourth smoke stack served as air ventilation.
Posted by Jo at 8:24 PM

Wow! I'm the first to post. That never happens! I really enjoyed this bit of history. Thank you so much. I enjoyed every word. I'm a history buff, and love to learn about the Titanic.

Mean Mama, I find the Titanic so fascinating, there is always something more to learn about it. I'm glad you enjoyed the post. :-)

The Titanic has always fascinated me too. I wish I could have seen it. The architectural detail and the craftsmanship looks absolutely amazing. You just don't see things like that anymore. It was a real work of art.

Lovelyprism, it was not only a work of art, it was a scientific marvel. The engineers made one little engineering "goof" however, and the unsinkable ship -- sank.

there would be few people in the world who arent fascinated with Titanic. i am glad that i read your blog. Im too a history buff.you are an marvelous writer.cheers:)

I agree people should be able to view the remains of the Titanic...on film but not to dive to it. It is a grave site and should be regarded as such, much like the resting place of the Edmond Fitzgerald is.

I love the story of the Titanic, because its something youcan tell young children without having to get all detailed about the deaths. I first heard of it when I was 6. I think they should surface the ship and have it on display in a museum or something.

I learn so much from your posts. I never knew about the fourth stack.

I've done a bit of Titanic research myself after a recent trip to Chelsea Piers to take shots for my blog. They've a display about where the Carpathian docked after it rescued the survivors. I want to find out where exactly the Titanic would have docked if it arrived as planned, now I'm more motivated to find out and shoot that as well. Posting soon, I promise.

I'm always so sad to think about the Titanic because of the class system that caused so many deaths. It makes me angry in the same way (if not to the same degree) as thinking about slavery here in the U.S.

Your post if expotentially better than the movie -- one of my all time least favorites and one that I wanted to walk on as I suffered through it...

I think you should tell the readers of your blog that you know Dr. Ballard personally (as opposed to impersonally?! heh) and worked with him at one time.

As usual, you are overly modest about such things and I do not make it a habit to say much -- but this one time I could not resist!

READERS!! Johanna KNOWS of what she speaks because she actually KNOWS the man who found the Titantic! (Yes, I am shouting this from my little hill out here in Iowa ... but I thought people should know!)

The Titanic's story has always fascinated (and goose bumped) me, too. I wonder about the spirits of those lost people - it seems that when such a highly emotionally charged event occurs, the anguish remains at the site forever.

Years ago, I visited Charleston, SC, and stood outside a building by the sea where African slaves were auctioned off. Their pain was so palpable still that I was unable to enter the building and in fact, could hardly breathe. I couldn't see any spirits, but their grief was physically crushing to me.

There is a powerful romantic image even to the phrase "lost at sea" so I think the Titanic will always intrigue people.

The Titanic is a fascinating story. I had seen a documentary a few years ago about Ballard but it did not mention the work he did for the Navy.
Don't know if you heard, but it was announced that a fund has been started for the last survivor, 97-year old Millvina Dean. It's an interesting article from the Belfast Telegraph and can be found by linking to: http://www.belfasttelegraph.co.uk/news/local-national/stars-back-titanic-survivorrsquos-fund-14298857.html

Hi Jo... now there's a person who really succeeded in following his dreams, even to the bottom of the sea. Doesn't get much better than that I think... Hmmm so what is Russell alluding to ? You know Dr. Ballard ?

A traveling exhibit of Titanic paraphernalia came to Raleigh some years ago, and I was fortunate enough to see it. It was fascinating to see the things that had spent years at the bottom of the ocean; cups, plates and the like from the ship.

This is what I love about reading blogs. You never know what information you are going to get.

Great trivia you've got there Jo. The picture in this post holds this information to be true. It's always relieving to know that modern ships became safer because of what happened to Titanic. This put a meaning to the many lives lost in the sinking of the supposed to be unsinkable work of art. I love this post.

I have always been fascinated by the Titanic. I even did my 4th grade science project on why it sank, built a model and everything. I was never able to bear watching it sink in any of the old movies they made of it.
I wouldn't doubt at all that the spirits of those poor people would still be felt there.

Very interesting. It is true, the Titanic seems to have left a continuing fascination for the story. My Granddaughter has long been an avid gatherer of any info she can read, & I remember being fascinated by the story when my Grandmother told me.
Thanks for sharing.

According to Google, the Titanic was headed to pier 59 in Chelsea, so i'll be over there with my camera this week!

Did you go to the Victoria museum a couple of years ago when they featured the Titanic?

I just heard the news that Milvina Dean, the last survivor from the Titanic has passed away - exactly 98 years after the Titanic was launched from the quayside in Belfast.

Wonderful post, Jo. About 7 years ago, I was wandering a large cemetary in Massachusetts, when we happened upon 2 small, unassuming graves. They were father and son. One had the the term "lost at sea" engraved on the tombstone. The dated coincided with the titanic and sure enough, after checking with Google and a website called Titanica, I discovered that they were indeed two men who perished with the ship. It was unexpected.. and made me feel very connected to that historical event.

How ironic that you did this post -I just read that the last survivor of the Titanic died Sunday. She was only 2 months old when she took the trip. I wonder if you had a premonition. Here's the link to the article: http://www.latimes.com/news/nationworld/nation/la-me-millvina-dean1-2009jun01,0,907355.story