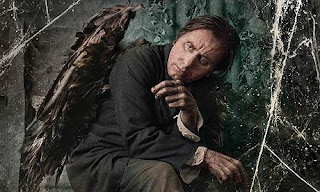 This is not normally the image that comes to mind when one thinks of angels, is it? But in my opinion this is probably closer to what angels really look like than what we imagine. If angels were to walk amongst us, they would have to be visible and yet indiscernible all at the same time. I have had encounters with angels, and they are not creatures with radiant bodies and shimmering wings. They are more like rough-hewn diamonds and their beauty and strength is from within.  I once had an angel tap me on the shoulder when a woman next to me was dying, and I was able to save the woman's life.  Angels don't fool around. 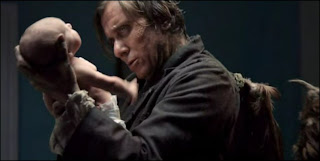 Recently I watched a movie called Skellig the Owl Man, taken from the children's book Skellig, by David Almond, and I think it is one of the most wonderful movies I have ever seen. Skellig is definitely not a conventional angel. At first he is mistaken as a homeless man.  He craves Chinese food, beer and aspirin.  He is crotchety, unkempt, arthritic, and he just wants to be left alone to live in the garden shed. But as the eyes are the windows of the soul, Skellig's power, kindness and love becomes evident through his eyes.

The movie is not a religious movie, but rather a spiritual one.  There are references to evolution in a spiritual context, and also references to the poet William Blake, who had unconventional ideas about spirituality.  Personally, I have never been a fan of organized religion, because often the proponents of organized religion are also judgmental, and I have been on the receiving end of that judgment.  Organized religion and real spirituality seem to be moving farther apart all the time, but I believe spirituality is all around us if we open our eyes to see it.  Skellig the Owl Man is a perfect movie for kids, to teach them to look for spirituality everywhere and in everyone -- even in themselves.
Posted by Jo at 8:35 PM

Had not heard of this movie, but I've already noted it down. I will watch anything Tim Roth is in, I think he is such a brilliant actor. The premise of the movie is right up my alley - everything is not always what it appears to be. And religion, Amen to what you said sister.....

I agree wholeheartedly with you and your commenter. Spirituality is alive and well within me and I'm not talking religion either..;p

This is definitely a movie I would be interested in...thanks for sharing. I have an interest in angels and even have read a few books on angel encounters which has all true stories. I find it very interesting and very uplifting.

I believe in guardian angels, too. I've never noticed the shoulder tap, but I'll be they have and I've just been too busy to respond! I'll check out this movie, Jo, thanks for the recommendation. I just might have to rejoin Netflix to get it, though.

you come up with such interesting movies!!

I am going to look for this one.

Sounds like an interesting movie...You are so on top of all the trends...I always find new things here!! You are a delight! ~Janine XO

Thank you for introducing to a surely worth while amount of time. Please have a good new week.

Yes you are right Jo, Organized religion and real spirituality are moving farther apart all the time, but that is/ was to be expected..

Because spirituality like love can never be bound or organized..it is a free flowing river and the spontaneous flow of light..within and without.

I've put this movie on my Netflix list, thanks. I would like to know more about the angel who tapped your shoulder so you would save someone's life. Maybe your next post, please? I have had experiences which I can only attribute to guardian angels which saved MY life.

I can't think that I have heard of it yet, but will look into it. Perhaps my kids will enjoy it.

I bet I would like this. I too am not very happy with judgemental people.

Sounds great, I am putting it in my Netflix right now!

Never heard of this movie before so thanks for telling us about it. I have added it to my Netflix list.

And I agee with you and other. Spirituality is all around us. The more we find that spirit in our lives the less use we have for religion.

People who don't like religions can be judgemental from time to time too.