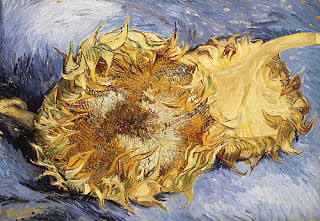 The English language is one of the most difficult languages to learn. I work with people from all sorts of foreign countries, and they are always asking me to translate something for them. "What does this mean...? Is it correct to say something this way or that way...?" In return, I have learned something of their languages as well. The other day I learned the writing symbol in Traditional Chinese for the word book -- well, at least one of the symbols.  It was really beautiful, and as I looked at it, it looked exactly like what it was meant to represent.

The most difficult thing about the English language is that it is filled with contronyms -- that is one word that can have exactly opposite meanings, i.e., the word "sanction".  Or, take the word "dust".

The English language can be confusing, but no more so than in the written word. So much of our communication these days is by e-mail, instant messaging, social networks, texting ... and sometimes something that is meant one way can be misinterpreted as the opposite.

About a year ago I wrote an e-mail to a friend, and I realized a couple of weeks later, after re-reading it, that it could very easily have been misinterpreted by the receiver. I had meant it as tongue-in-cheek, which I am never very good at at the best of times, as I have a rather strong personality and I can come across as sounding angry when I an not, but I could see how it would have sounded ... well ... puzzling, to say the least. Can a phrase be a contronym? I suppose it can. In any case, it's too late. "The moving finger writes, and having writ, moves on..." Since then, I have learned never to say anything in the written word that can better be said verbally.

My friend has been going through a rather tough time for a while; well actually a sort of combination of bitter and sweet. I would like to say how happy I am for her, and to wish her well, and all the very best. Last night I had the strangest dream that she and I had dinner together. It was very formal and uncomfortable at first, but then we started laughing about some ridiculous thing, and the ice was broken. I woke up feeling rather sad that it was only a dream.

How many of you had wished you could rephrase something, after you had hit "send". You have to be very careful with the written word to be sure what you say is what you actually meant to say.  Or, as my good friend Russell often says, "You can't unring a bell..."
Posted by Jo at 8:15 AM

I wrote an email once which came off sounding a bit harsh....I then received a phone call from the sender and we worked it out. Since then I write the email, read it and then have someone else read it to make sure it sounds OK. Lessons learned are not always easy. I know that emails & texts are great but can miscommunicate but in a hustle and bustle world I do love the convenience of being able to answer when is convenient for me.

I think we all have an unfortunate e-mail story or an accidental reply to all moment. Written communication is awesome, but it does have its down falls. I try not to be sarcastic in emails unless I know the person knows I'm joking. Even then I add a lot of smiley faces.. :o)

Honestly though, I spend most of my days emailing people since I work with a lot of people in foreign countries. Its taught me to read and re-read everything before I hit send. Also, I've learned to me more polite in my writing because in a lot of countries the American way of saying, "I need this ASAP" is considered rude.

This is so true: I am always inserting one foot from mouth to insert the other!

The invention of emoticons came up for just this reason: that sometimes you need to put in a smiley face or something like that to communicate that you are joking. I have hurt many feelings by trying to be brief, so now I am careful to say only pleasant things in an email... unless I'm trying to get rid of somebody. :-)

I recently wrote an email to the extended family explaining my latest health crisis and asking for help from them. Apparantly it sounded a little harsh, at least according to my brother who put it all down to me not feeling well, the rest of the family? they turned their backs on us and haven't spoken to us in two years...it was never meant to be accusatory but they sure felt it was. Ouch!

I can't remember writing anything that I didn't mean to "say."

However, I cringe when I find a typo or misspelling, or worse, accidentally send a message to the wrong person from my address book - it's happened a couple of times when I've been in a rush, and much to my major embarrassment.

@ly, yes sometimes we need an editor to proof read our stuff before we send it, don't we? I am always proof reading for one of my co-workers. I need someone to do that for me too. :-)

Katy, oh, yes ... and sometimes we can say something, and actually mean the opposite -- like a contronym -- but after we hit "send" it's too late.

Sandra, LOL. I often say, "That sound you hear is me taking my foot out of my mouth..."

DJan, yes :-) *heh* The written word can be very tricky at times, and emoticons can help set the tone.

JoJo, omigosh, I can't believe your family turned their back on you while you are in a health crisis. That's just cruel. I'm so sorry to hear that...!

Paula, oh, yes typos. I try to watch for them ... but ... I don't think I have ever accidentally sent an e-mail to the wrong person, though. At least I hope not. *heh*

Oh yes, all the time. I am constantly ringing bells that can't be unrung.

Email is tough because the cues of tone and body language are not there. I often find I have to call and speak to someone to clarify an email I have read. I know that goes in the other direction too!

Carl, yes, the body language and facial expression are missing, which can turn an e-mail into a whole other entity.