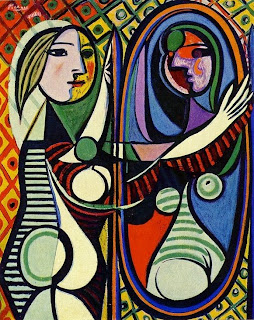 Girl Before a Mirror
Pablo Picasso
1932

“O wad some Pow'r the giftie gie us
To see oursels as others see us!
It wad frae mony a blunder free us,
An' foolish notion!
What airs in dress an' gait wad lea'e us,
And ev'n devotion!” ... Robbie Burns

If you were given six words -- and only six words -- to describe yourself, what would they be? You can give this some thought, or you can jump in. And then, if you were given six words to describe yourself as you think others see you, what would those six words be? It's strange how often the two lists are quite different. One of the words that would be on both lists is "funny". People often describe themselves as funny, and they think that other folks perceive them as funny as well. Humor is a bonding emotion.

I am going to leave this post up for a few days, because I have had so many wonderful visitors to my blog, and I haven't had an opportunity to visit everyone. So, for the next few days I will visiting all you folks. Put the coffee on.

Lorna is right. Where are your six words?
I will have to give this sone thought and get back to you.

Um wow this like filling another slambook/yearbook...haven't come across many in a while,the last one i filled was three years ago in 10th grade :D
um,so me describing myself:
funny(lol there you go),bookworm,short-tempered,compassionate,forgetful(at times,but I always remember dates...reflects my love for history see? lol),optimistic

Anyone at a first glance would describe me as short(5 foot nothing :( lol),shy,(tad bit) arrogant,crazy(if I'm with my friends,and then I'm always laughing),childish....uh I can't think about any. Only six? lol took me about a quarter of an hour .
well there you go,me-a wierd mix of words!!
-Sweta

descibing myself:
1) sensitive (over sensitive at times)
2) gullible
3) confident (to the extent of being complacent)
4) appealing looks
5) overweight
6) pleasant person

others would see me as:
1) normal but fun
2) sharp witted
3) not a great listener/ unresponsive
4) dependable
5) big hearted
6) they can take me for a ride.

There...! I am sure what I think others think of me is probably wishful thinking for most part.
But this was good fun. I have tried to be honest. and waiting for others to follow suit.

Maybe it's because I used to be kind of a funky singer in a nightclub.

I was an entertainer to a largely black audience in Newmarket, Ontario, ttraining white chicks to be Raylettes in a Ray Charles rendition of I wonder, which is different from I Wonder Who's Kissing Her Now, funkier.

We all feel at times what used to be called black, that's why a honky can sometimes do blues.
Ah,behind the tracks Chicago.
I sometimes wish I'd grown up there. To be a real bluesman.

A mirror shows one's physical side only. It's not what one thinks, it's what one sees - facts.

Strange thing about Bloggers. They are willing to tell us about their innermost thoughts and feelings, yet many of them won't offer in their Profile,even a vague image of themselves ,to give us some idea of the physical person behind the words.

I would discribe myself as...
1)disorganized
2)messy
3)wondering
4)sensitive
5)compastionate
6)quite

I just had my evaluation at work so I will use some of what they said about me...

4)fun to work with

6)always says what is on her mind.

That's so true, about the differences in men and women describing someone. I've noticed that myself.

describing myself (I'm sure this would change on a daily basis): thoughtful, emotional, smart, opinionated, loyal

others describing me: quiet or shy, snobby, smart, kind, guarded

It's always been interesting to me that because I am thoughtful (aka I listen more than talk) and am slightly guarded when I meet someone new, they often assume I'm a snob. I've had several people tell me when they first met me they thought that. It seems a weird conclusion to which to jump, but I don't know how to change their initial perception of me. Luckily that perception doesn't seem to last very long.

oh this is fun!

how i view myself: strong, happy, intelligent, aware, growing, loving

how others view me: confident, smart, supportive, pretty, organized, easy-going

thanks for the great exercise!

so what are yours?

Let'see.
Myself
1. Not part of the volgivagant group
2. But not part of the isangelous bunch either.
3. old
4. Shakey
5. Having perspicacious judgment
6.Deeply Religious
Others
1. An expert at causitry
2. Reteller of quondam experiences.
3. Believer in cynicocratical government ( at least in the family)
4. Old
5. Funny
6. Nice guy ( like "Your one nice guy".

I've seen this question go around alot, and I find it really hard to answer. The other versions i've seen mainly used 6 word sentences, so i'll try my best to respect that rule. I'm going to modify the questions a bit though - I feel the need to focus on my future instead of the illusions of the present.

Who I want to become : Know thyself, observe others, understand life.

How I want to be perceived one day : Rare diamonds are formed under pressure. (Hey, I can always dream, right?)

Those kinds of questions always feel awkward to answer.. for me, anyway. Just like at a job interview "tell me who YOU really are." or some such question. But I'd love to see your answers. ;)

I think that can be explained by a 6 word story can not go more than nonsense.

Six words to describe me. Dancing as fast as I can. Sometimes holidays and deadlines catch me off guard so I thought I had another week.

Well... I certainly wasn't expecting this! I was all set to tell you how I had seen this painting at the High Museum in Atlanta when bang!=-)

Yes, good hair. I once attended a women's group for six weeks where towards the end the only consistently positive thing anyone said about me was I had good hair. Go figure.

Others describe me:
outspoken
responsible/irresponsible (depends on who you talk to about me being a mom)
exuberant
mom-shaped
contradicting
redhead

Okay, Josie, you're next! D

"Trying to live life beyond ordinary"

Thanks for playing, everyone. Okay, my turn.

Talented
Helpful
Pushover
(as in spirit) weak
(dependent/)stupid
(yet) optimistic

ok, this one is real fun

others view me as:
1.gullible
2.proudy
3.innocent
4.cute
5.reticent
6.sham

Here I go (sorry for the lateness, trying to read all the blogs I follow):

By the way Jo, the painting that you posted, in a design class, we had to do a project based upon the "girl in the mirror" but could only use black and white paper. I will have to take a shot of the project and post it for you sometime. It was hard to describe myself, because I feel sometimes that others really do not take the time to see me for who I am...I can get a bit introverted, but that is only because I love to observe the world around me!