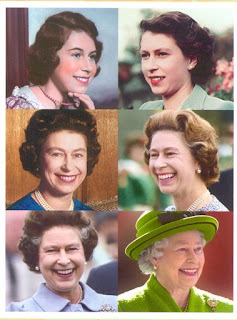 I have always been fascinated by the changing human face over the course of a person's lifetime. Here in Canada, we have the Queen's face on our $20 bill, and some of the earlier notes that are still in circulation look so different from the recent ones. I think the Queen's face has aged remarkably well. She has lived a healthy, active life. One of her hobbies is going for long hikes with her dogs. She has also been in a long-term relationship, and she is close to her children and grandchildren. All of these things are positive, affirmative life events. Sometimes, though, people lead difficult lives, and their life events show on their faces -- much like in the "The Picture of Dorian Gray" by Oscar Wilde. In the story, an artist named Basil Hallward paints a picture of Dorian Gray while Dorian is still young and full of youthful beauty. Dorian loved the picture so much, he sold his soul in order to stay young and beautiful, and the picture would age instead.

I used to love drawing portraits of the human face, and I particularly enjoyed drawing portraits of people in their later years, whose faces were filled with wonderful expressive lines that reflected their life experiences. I am currently hooked on a reality television program called "The Real Housewives of Orange County", and the women all look like Barbie dolls. They're all very nice women and still attractive, but in a very artificial way. My favorite is Jeanna Keough, a former Playboy model who has gotten (*gasp*) chubby. She is the least artificial-looking one in the group, and probably the most real in her persona as well. 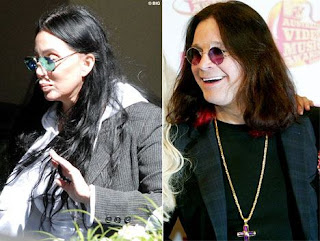 At each stage of life, the human face has its own beauty. Youth is not necessarily the most beautiful stage, except in the conventional sense. Anyone who attempts to recapture youth really doesn't look younger, they just look strange. Who knows what Cher might have looked like if she had let herself age gracefully. She was attractive as a young woman, but in my opinion she has managed to make herself look like Ozzy Osborne -- with trout lips.

The Queen will be 83 years old on April 21st. As you can see from the first picture to the last picture, her face has changed with each stage of her life, but at 83 years old, it is still possible to be beautiful. And besides, the most effective facelift is a smile...
Posted by Jo at 8:06 AM

Actually, I think the Queen is looking better every year - I mean, *gasp* look at some of those hairstyles! lol And I agree that some of those celebrities who have "work" done just ruin their natural beauty and will age even worse than they would have otherwise. I must say, however, I do not like my lines or loose skin now that I'm into this new decade! lol

A Woman Of No Importance said...

I agree with you about dear Cher - such a shame really, she has always been very unique looking, and those trout pouts don't do anyone any favours, do they?

As for the Queen, I would have to say that perhaps if we all had servants to cater for our every whim, no money or career troubles, and plenty of leisure time and space, then perhaps we might look as well-preserved and as lively as she indeed does...

It is so refreshing to hear another female praise the beauty of the aging female. I don't want to erase the life in my face. There is nothing lovelier, to me, than a laugh line.

The Queen is lovely and has aged very well, I agree. I enjoy your posts, though I don't always comment, and I also like watching people's faces and reading their lives on them. There is a local attorney & author that teaches a course at a local law school for students to learn face reading in order to better select jurors. I have taken his seminar as well, and find that as a result I read faces all the time. http://www.amazingfacereading.com/

This might upset somebody, but I hear five dollar bills with Licoln' likeness on it are shunned by conservative South Caroligians.
So much power, symbolism in a visage.

It is interesting to see how others change as they age. I think you are right about the Queen. She carries herself with dignity without being too superficial. Lately I have been stopping and perusing old photo albums as I spring clean and watching myself as I age is also fascinating. I will see a pic of myself as a young mom and for a second wonder who it is. Funny how we view our selves....do you think the Queen does this, too?

I like you last line, the most effective face lift is a smile!!!that is a wonderful sentence

I agree the most effective facelift is a smile. I think it's tempting as we age to want to do plastic surgery but it's best never to start. People need to work on the inside and embrace the aging process. Talk to me in 10 more years and I may have a completely different opinion...LOL!
I hope not. I hope I can love myself just as I am. Having your health is the most important thing.

Lovely sentiment the most effective face lift is a smile. I can reccomend a wonderful little book that features the Queen, An Uncommon Reader by Alan Bennett, a great little story, written with warmth and humour, featuring a woman who is without doubt one of the great icons of the 20th century. Jo I always enjoy your posts.

There are so many examples of truly frightening plastic surgery, even among those who are not in show business. It has become epidemic because society attaches shame to aging.

I would rather look old than deformed.

Going for long hikes with your dog is great for your and your dog's life expectancy. People with dogs live longer. Though of course it is how these things affect your quality of life which is important.

It's the hairstyle that could make a face look beautiful or ruin a beautiful face. The Queen's hairstyle looks static and unattractive( compared to that of her younger days),and this makes the lack of wrinkles irrelevant.

Wow, good call! LOL. I never noticed the resemblance between Cher and Ozzy. My beautiful Grandmother has aged much like the Queen. She carries herself very regally and she is just loaded with wrinkles at 92, but she is so incredibly beautiful to this day.

Omigosh, you did not just mention Oscar Wilde? You'll never guess, but.... I'm related to him! He's like my great-great-great-great-uncle or something.... lol
My great-aunt had this family tree and she showed me it. Good times....

The lust for youth eh? I guess most people forget what a pain the rear being young was.

After all there is nothing to unchangeable things on this world...except her graceful smiles....

Boy, was that really Cher!! Surgery has not been kind to her. On the other hand, the Queen looks great. Guess I will follow along in Queen's footsteps and do without the surgeon's help. Just hope to do as well. Smile. D

A Woman of No Importance, yes, having all that money and privilege certain doesn't hurt, does it? And the Queen has never had to worry about losing her job. :-)

Judi, I agree completely! Let's hear it for laugh lines!

Raevyn, thanks for the link. I am going to check that out. It's a very interesting subject, isn't it?

Ivan, I had not heard that! It's hard to believe, isn't it!?

Kathy, oh, yes, I think it is human nature to look back at our earlier selves and wonder who the heck that is... *heh*

TheChicGeek, I wonder if people like Cher ever sometimes think they have missed out on seeing who they really are!

Book Pusher, I have heard of that book before, and thank you for reminding me. I would like to read it.

Hearts, yes! How did that happen in our society where people have become ashamed of aging!? It's too sad!

Ruby, I wish I had a dog just like you, to go for long hikes with!

DUTA, LOL, yes, the Queen definitely has helmet hair. I have often wondered why. *heh*

LovelyPrism, oh goodness, yes. A person doesn't have to be young to be beautiful.

Greenpanda, omigawd! You're related to Oscar Wilde!? You have some wonderfully creative genetic material in you! Wow!

Nomore, yes, a smile can really light up a face, can't it?

Donnetta, Cher has completely morphed into a whole 'nuther person. I liked the earlier Cher better.

The Queen has a lovely quiet beauty that simply radiates from within. I believe this reflects a life well lived and filled with purpose.

I turn 60 this year and this post has made me feel so much better about aging. I do hate to see those celebrities that have had so many surgeries, they look like their going to "burst"! I liked seeing your age progression of the queen.

There is beauty at all ages, and I appreciate your blog showing how beauty flows, a face like a river through time...changing moving, always lovely.

That was a great post and showing the many faces of the Queen was a good way to illustrate your point. I agree people who have had surgery do not look younger. They just look as though they have had surgery. I havent seen too many examples of where they actually look better. Strangely Ozzies wife Sharon looks beter for having had surgery. I wouldnt like to take the risk despite how annoying the jowls and wrinkles become. Its sad looking at Cher and now Madonna. The pressure on them must be enormous because us ordinary folk feel it enough.