My Brush With The Law 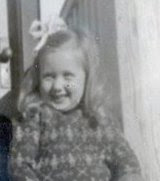 This is the face of a hardened criminal. Yes it is. Today I was telling a friend of mine about my brush with the law. When I was three or four years old, my mother decided she would give me little chores to do, and one of the chores was to take the garbage to the bin at the back of the garden. But I had a propensity to wander whenever I went outside. I would visit the neighbor's dogs, or stroll over to my friend Janie's house, or find some interesting tree to climb. Usually there was a trail of clothing behind me as well ... but that's a story for another day. Anyway, one particular afternoon my mother gave me a bag of potato peelings and asked me to take them to the garbage. On my way there, I saw something interesting in the neighbor's back yard -- I can't remember now what it was. Probably a stick or something. I climbed through the neighbor's fence to investigate my new-found object, and decided to leave my bag of potato peelings in the neighbor's garbage.

Later that night when I was in bed, Constable Bathingswaite of the local police force dropped by to tell my parents that the next door neighbors had called the police on me. I was summoned to the living room in my little white nightgown, my hair in a halo around my head, looking every inch the angel that I was.

"Is this the criminal?" Constable Bathingswaite boomed. He terrified me, but he made me sit on his knee while he and my parents had a cup of coffee and a good laugh.

A few years later, I had a severe bout of tonsillitis which required my tonsils to be removed. This was done by surgery under a general anesthetic. Certain anesthetics that are used for surgeries of short duration also have the properties of being what are known as "truth serums". When I woke up from my operation, the nurse standing over me was none other than my wicked neighbor. She looked at me and said, "Do you know who I am?" and I said, "Yes, you're the bad lady who called the police on me!" I couldn't believe what I was saying, and even as the words were coming out of my mouth, I couldn't stop myself. The look of shock on her face is indelibly imprinted on my brain. To her credit, however, she made my hospital stay as comfortable as possible, stopping by my room several times a day with bowls of ice cream and rice pudding.

A few years ago I required an RCMP record check for my job -- through the RCMP Headquarters in Ottawa -- and I was terrified they would find out about my brush with the law, but apparently they did not. I passed the record check, and I have gone straight ever since.

Awwwww ! What a lovely post. Jo, you could never be a law breaker. I am sure your neighbour had no clue who had left the bag with potatoe peels in her back yard. Such a lovely, innocent, brush with law. No wonder the polic officer had coffee with your parents while you sat perched on his knee(You look beautiful and charming in that picture jo).

And I know exactly what you mean about telling all under the spell of aneasthsia. I think your neighbour was suitably embarassed. ha ha.
I thoroughly enjoyed this post.
Thanks for visiting 'the songbird's nest...'and for your kind words.
have a great sunday..!!!

That was great fun. You were such a cutie as a baby. I love the picture...you look identical today :) I forgot about that song and the video was great. Thanks for some lovely entertainment :)

Jo, they should have tossed your little ass in jail! My gawd, leaving potato skins in someone else's garage! Oh my!

The following happened when I was about two. My parents put me in the pram and took me with the to shop at the Bay (back then they had what they called the groceteria in the Bay basement level). Well, they went through their entire grocery shopping and then we all went home. As we got a little ways from the store, one of them noticed that I was holding a can of Lysol Spray. Neither of them had intended on buying it, and certainly never gave it to me to hold.

So, they took the can back to the store for a refund! Who would have believed them, that they did not steal it, but that their toddler just grabbed it off the shelf without anyone noticing? [Then things kids do, huh?]

Oh, btw, I am the blogger formerly known as frizzy ... my blog used to be Frizzy's Red Divan ... but I have made some changes. Just so you know ... I didn't disappear. Rnjoy the clear and cool evening!

Hey Jo,
That was a cute post, though there was a little brushing with the law. Lovely picture. Thank you for leaving such wonderful comments on " A Tour of my Candle Store "

I hope you will understand but I cannot afford to be associated with criminal elements. :)

What a cute story....thanks for sharing! Have a wonderful day!

Actually Jo it sounds like you could have the makings of a new "Alice's Restaurant" here. Did you ever try to dodge the draft?

Now you know what they meant in grade school when they said "That goes on your permanent record young lady!" But it didn't so all is well, you get to keep the potato peeling incident under cover...has the statute of limitations run out on your crime and is this why your broadcasting itnow?...That makes you a...a..."scoff" law. ha ha haha

That's too cute. I would love to have seen the look on your neighbour's face.

Just think, if we had known the virtues of composting there would have been much less crime in the neighborhood!

Hey, I'll wish for you a sunny day!

Things are great here except that I cannot work 24/7 in the yard and garden to get everything I need done....

I do not have any issues with any comments but at one time I thought I might.... so I got me some security.... but right now all is sweetness and light :-)

I am glad you decided to shun the criminal path and go straight.... life is more pleasant that way.

I remember that when I was a kid my Dad had a friend who was a detective in the Newark, NJ police force. We arranged for him to interrogate me. I remember asking him to, but I have no idea why except maybe curiosity. It was interesting. even at that early age I learned we sometimes give the answers people want to hear and not the truth. It has made me very cautious about this ever since. I know I went a litle off your topic.. but you brought back an interesting memory and I had to share. Thanks Jo!
Carl

Kudos to your neighbor for making your hospital stay a pleasant one! I had my tonsils removed too and still remember it. And all the lovely jello and ice cream!
You were such an adorable child!

People call the police for potato peelings in their back yard? Talk about a waste of resources. Sheesh.

Except for the bow in your hair, you look exactly the same!

just think of how you could have turned out if not for that brush with the law.......probably bonnie to russell's clyde. take good care and keep on being you, jack...ps. glad to hear the flowers are popping up in your neighborhood

What an amusing story. I am particularly interested in the "trail of clothes". My youngest daughter did not like wearing clothes when she was 2/3 years old. I had to hunt for her clothes numerous times a day and dress her only to find her in only her panty just a little while later. Today we have a good laugh about it whenever we reminesce.

well then you and human kind of human's daughter are in good company cause i to hated clothes, the gardener use to bring my mom my clothes saying, he found the little miss' clothes but didn't know where the little miss was. wish i could go round naked again

CSI investigation. There may have been two suspects.
Good thing you didn't have your dog with you. Cop would have said, "Is this the alleged dog?

Did she call the police on you for putting trash in her garbage can? Wow, some people can be so petty. It was a cute story though!

Why do I think whether you had drugs in you or not you might have still said that to the nurse? hmmm.

Oh, Josie, if I had only known you were a criminal... this changes everything.

I'm so glad the bad lady didn't snuff you as you lay angelically in your hospital bed without your tonsils to protect you.

We must be related. My mother said that when I was two, I wandered the neighborhood, dropping clothing as I walked so that she could usually find me dejectedly sitting on the corner curb naked as I was not allowed to cross the street. And all my children refused to wear bathing suits on the beach at that age, which offended some people for reasons I never understood.

Kind of like someone who would call the police over potato peelings.

I loved the photo of you - the same smile today as yesterday! Precious story too!!!

LOL. You have bark-like instincts.

I just had a good laugh. I can imagine the feeling that went through the lady when you said what you did. But my question, why would she have called the police? Strange.
Have a good week.

You had me rolling on the floor and reminded me of the time my son called the police as a prank when he was 10. He and a little friend thought it was a hoot until they realized that police easily track phone numbers and addresses and actually showed up! You were a cute little girl, by the way.

A very sweet picture! Who would have thought that behind this innocent face hides a dangerous criminal, a threat to the society?

There is a small award for you waiting to be claimed on my blog so do stop by :)

Sooooo...a lawbreaker, eh? I knew you were too good to be true! :-D

Just an off topic thing...hope you don't mind. I've been sketchy on my blog reading but noticed today that Iowa Grassland blog is missing. Did I miss an announcement about it or did he just decide to move on? Just wondering, I know you were friends. If for some reason it's none of my business, pardon my curiosity. ;-)