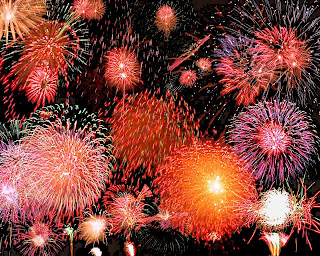 Omigosh, this stuff never happens to me -- especially on Friday the 13th. Yesterday after work I decided to stop and pick up a New Yorker Magazine at my favorite magazine store. For some reason the lottery tickets looked -- enticing. I never buy lottery tickets. Ever. But today I bought a Scratch 'N Win, and ... yes, you guessed it ... I won. I'm not going to tell you how much it was, but it was one number -- followed by three zeros. Three! Okay, so the number was fairly low in the scale of one to ten, but still, it was followed by three zeros.

I am in desperate need of a new television set, so this raises the ante a little bit -- well -- a lot.

We have an ongoing lottery pool at work, and we keep hoping we'll be the winners that everyone reads about on the front page of the newspaper.

Yesterday afternoon at almost 4:30, everyone had gone home for the day and I was the only person left in the office. The CEO came around the corner, stopped in his tracks, looked at me and said, "Oh, I see no one is here..."

Working in a large organization is sort of like school, isn't it? We walk through the halls and say "Hi" to certain people even though we don't otherwise know them. And wouldn't it be fun if we had recess? Here is my favorite commercial.

Have a great weekend, everyone. I'm off to do some shopping.
Posted by Jo at 8:55 AM

Wow, congratulations!! I'm trying to think what I would buy if I won a couple thousand right now... a new tv would be nice! And some new spring clothes. Oh, and I really want a dogwood planted in the backyard.

Got to stimulate that economy- it's my duty as an American, right? LOL

Congrats, we're jealous, I suggest a day at the spa!

Congratulations...!
I think I would go on a vacation by myself if I won a few thousand dollars.
Vow...! Your luck is turning Jo. I am sure this is going to be followed by many nice things in your life. Here's a toast to your victory...Cheers...!!!!

Hooray for you! I think you should get a really NICE flat screen TV and whatever else you can afford.

Jo... did your winning amount have a period after the 1st zero? $?0.00..just kidding! Yeah..a Winner! Congrats! You lucky Girl!

Thanks Jo! I really enjoy your blog as well. :)

I was so excited to see that bluebird yesterday afternoon. He was so beautiful! I need to get my birdfeeder back up for him.

I'm excited for my tax refund - I would ecstatic to just WIN money I hadn't earned!

As much as I hate being one of the only people in my hallway at the end of the day - it's always nice when any of my bosses comes by and sees I'm still there working!

Congratulations! I hope you're having fun shopping, spending money that you've won rather than earned must feel brilliant.

I work for a large organisation as well - a university - and I what I really hate is when I go past someone in a corridor and say hi - or just smile - but that person doesn't smile back... but maybe that's an English custom.

Hi Jo congratulations on your win,I came home from the office yesterday and my wife told told me that we had won £50.000 on the premium bonds which is a bit like the lottery but you don't lose your money as it run by the government. It's like putting your money into a bank but no interest is paid and the money goes into a monthly draw with a top prize of a million pounds.But this was my wifes idea of a joke,it was 50 without the three zeros,still this the third time this year we have won £50.00. Go on Jo splash out with it and enjoy yourself.

Congratulations! The best Friday the 13th..

Congratulations Jo!!! What a thrill. I love it when the universe bestows gifts unexpected!
Enjoy! :)

Ya Jo!! You needed some good luck in your life, maybe this is your start!! I recommend a nice HDTV! Not too big, but big enough! You won't regret it!!

P.S. Our tax return is a number with 3 zeros behind it this year, our biggest ever!! Now we can move out of this dump we life in!!

Who said Friday the 13th was bad luck? Congratulations, Jo. You deserve it the most!

Great post!! And Congratulations to you!! How exciting. I am so glad this happened to someone I actually "know"!!!

Congratulation on your win, a win is a win right!!!

Congrats! A quick getaway trip to Paris in spring sounds good to me.

Congrats! I never ever win when I buy one of those! I loved the commercial too, I'd never seen it! Have a fun weekend.

Now that is a way to end a week...will you be going Plasma? Maybe you should cross the border to the U.S. since stores are pretty muching giving away electronics. I think it has to do with we are in a depression or something.

Lucky you! Isn't it nice to be able to get something for almost nothing once in awhile?

Good for you! Have fun with your winnings!