The National Portrait Gallery of Canada 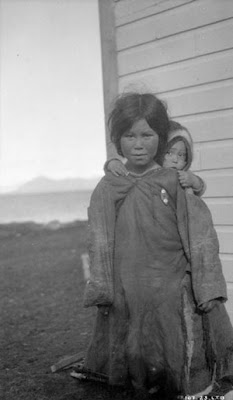 I was browsing through the National Portrait Gallery of Canada online, and I came across some absolutely beautiful portraits, and I wanted to share three of them with you. The first one is called "Ataguttak carrying baby Kalluk", and it was taken in August 1923 in Pond Inlet, Northwest Territories (Mittimatalik/Tununiq, Nunavut). I think it's a beautiful picture. Look at the expression on baby Kalluk's face. I'm not sure if Ataguttak is Kalluk's mother or older sister. I'm guessing she is the older sister, because she has not yet grown into her clothes, but she has a wise face. Her clothes are made of some sort of hide -- probably seal. And over her shoulder you can see the wilderness stretching off into the hazy distance. Ataguttak is not sure what to make of the photographer taking the picture. She doesn't know she is supposed to smile when her picture is taken, and that is what makes her expression so wonderful -- full of curiosity and a bit of uncertainty. I like to think as soon as the picture was taken that she went giggling on her way with Kalluk bouncing in the amautik on her shoulders. The photograph was taken by Lachlan T. Burwash (Canadian, 1874–1940) and it is a silver gelatin print. 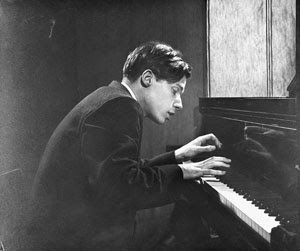 This second image is a photograph of the famous and immensely talented pianist Glenn Gould. He had a very peculiar way of playing the paino, and he was almost distracting to watch. As he played, he often swayed his torso, almost always in a clockwise motion. He would occasionally make odd sounds as well. He was a child prodigy and developed these habits at an early age. This photograph captures the strangeness and the odd motions he made while he was playing. The photographer was the famous Yousuf Karsh (Canadian, 1908–2002) and it is also a silver gelatin print. 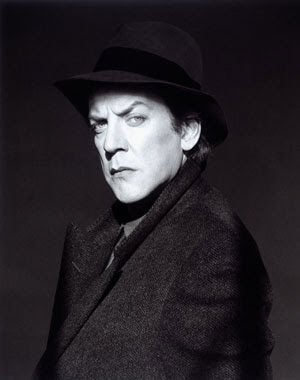 I'm sure you all recognize this fellow. You don't? Oh, sure you do. It's Donald Sutherland, also known as Keifer Sutherland's father. Keifer plays Jack Bauer on the TV series "24". And here's a bit of trivia for you that I'll bet you didn't know. Keifer Sutherland has a twin sister, and her name is Rachel. In case you don't remember Donald Sutherland he was in "M*A*S*H", "The Dirty Dozen" and "Klute", as well as "Ordinary People" with Mary Tyler Moore and Timothy Hutton. He can be deliciously wicked, and this photograph captures that element perfectly. The photographer was Robert Mapplethorpe (American, 1946–1989) and it too is a silver gelatin print.

For anyone who has never heard Glenn Gould play, here is a video of him playing Beethoven,Piano Concerto No. 1 Op 15 - I. The video is grainy, but the sound quality is good.

You can check out the other amazing photographs at the National Portrait Gallery of Canada.
Posted by Jo at 6:14 PM

this is amazing :) and aren't the father son duo so alike.

Little baby Kalluk looks very, very much like my 2nd youngest granddaughter. I bought a birthday card for her 2 years ago of a reprint of a painting of an Native American Indian girl that looks like a painted picture of her in Indian dress....just goes to show, ethnicity is a human distinction, but really in spite of our attempts to label and categorize,our looks and tendencies are universally shared .

the baby looks so so so soooo cute!!!!

What a wonderfully different post! LOVE the first shot with baby kalluck!! All of them are fab, though!!! I love old portraits!!

Very unusual pictures. Sutherland looks almost demonic in black and white. I would like to know more about this pianist. Wonder if he was an Aspergers person-perhaps savant. I have never heard of "gel" prints. Tell me more about how they are made. Interesting. D

Its amazing how much black and white photography speaks to our souls. So much more than color.

Love that photo of Sutherland! There's something about that man that just pulls me in.

Gorgeous photos! I've always loved black and white portraits - no distractions just pure essence of the subject. And,the clip of Gould - amazing. He became one with his music.

The photographers are so talented. How wonderful to possess such talent. I love them all.... but the one of Sutherland is deliciously wicked.

We spent quite a while in the museum in Victoria, BC last fall and the picture of the girl with her baby sister reminded me of the rich First Nation history. Wonderful photograph. I didn't know Donald Sutherland was from Canada! Also loved watching Glenn Gould. Very interesting post.

These are all brilliant photographs. I'm sure that Ataguttak is the baby's sister because she looks to be about 8 years old. Her face is wise because life was hard, people grew up fast, and usually didn't live very long.

Glenn Gould is a magnificently talented man, and Karsh perfectly captured his esssence. Donald Sutherland is a marvelous actor who was most recently seen in "Dirty Sexy Money," which sadly was canceled. I didn't know that Kiefer had a twin.

Wow! That photo of Donald Sutherland is amazing! So luminous!