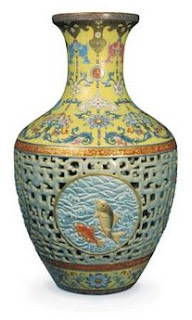 This vase sold at auction today for $69 million dollars. A brother and sister who were clearing out their parents home in North London discovered the vase, had it evaluated, and put it up for auction with Bainbridge Auction House in London. Helen Porter, of Bainbridges auctioneers, said: "They had no idea what they had. They were hopeful but they didn't dare believe until the hammer went down.  When it did, the sister had to go out of the room and have a breath of fresh air." Apparently the vase had been in their family since the 1930s. According to the experts at Bainbridge, it was fired in the imperials kilns of Emperor Qianlong of the Qing dynasty. The vase has delicate perforations on the outside which reveals another vase inside, and is decorated in the humorous fish motif. The buyers have remained anonymous, but they describe the cause as "the most beautiful thing they had seen outside China in decades". 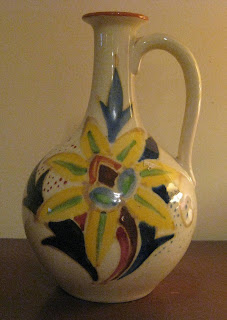 Do you ever wonder what treasures you may have hidden inside your house? I bought this exquisite beautiful rather pretty vase at a garage sale on Vine Street for 57 cents.  I'm rather partial to it because it has a sunny, Van Gogh-ish look to it, don't you think?  Could it be...?  Ever hopeful, I checked the pottery stamp on the bottom, and there is a little crown with the words "Finest China.  Made in Japan".  If anyone recognizes that stamp, I would be willing to negotiate.  I know a crown on the pottery stamp indicates "royal".  Could it be an antique Japanese vase from the Muromachi dynasty?  Or perhaps Kamakura? Just think of the possibilities. And I'm willing to part with it for only ... oh ... $5.70.  Well, maybe not.  I actually rather like it.
Posted by Jo at 7:02 PM

Holy moly! That's an awful lot of money...I think if I'd been the sister I might have needed a bit more than a breath of fresh air!

I saw that auction report in the news and love the vase, too, but am definitely more in the 57 cents category of art buyer. I especially relish Asian antiques and quite regret parting with some Chinese statuettes of my mother's at a moving yard sale years ago which I now know were worth serious money. I hope they went to a good home - (or bought one.)

It would be hard to keep my mind out of the gutter with that much moola. And where my mind goes my words are piling up at the tip of my tongue waiting to follow.

but I don't think my words will ever catch up with my filthy mine.

Over the years I have had many similar vases and other bric-a-brac in my house, but oh dear, the stamp on the bottom usually said: "Hong Kong"! (LOL) I love the header of your post. Unique and somehow so very YOU.

I heard about this sale too - wow! Thanks for the pic and the information about it.

Not worth that much money. Oh well, the president and his cabinet will probably get a good share of the proceeds, and then they will spend it foolishly, or give it to their peons.

Holy Cow! That is a lot of money. I think the vase looks a bit Gaudi!
To each his own...

If someone I loved gave me that vase, I would have never auctioned it off.

That's just me though. Some things are worth more than money.

I will always choose the memory over the monetary gain.

What a stroke of luck! Now, we can all dream a little, hope a little, stash away some garage sale for that day...

Wow, how lucky can you get! I think that I would have fainted, for sure! I love your vase and would gladly give you $5.70 for it! :) Cheers!

good thing you like it, since it doesn't say "Nippon" (or even "Occupied Japan") it must be less than 90 years old.
I would think it would be hard to turn down that kind of money for something sitting in an attic....

I'm with Violet - and actually, if I knew I had something worth that much then I would cease to be able to enjoy it. It would have to be locked up in a bank somewhere. So I guess I'd sell it & buy a cheap replica by which to remember my relative!

I always hope when I go into a Goodwill that I'll buy a picture that's hiding a rare expensive painting. No luck yet, but it's fun dreaming. The expensive vase is very pretty but your little vase would make me happier. I love the colors in yours.

Wow, if I had an attic I would have been runnin to clean it out right now :)

Oh how I would love to find something inbetween my aniques that is worth just a fraction of that.

i was looking for my friend blog about how to get your ex boyfriend back and i bumpt your blog and it look cool.. :) i will visit here again.

Personally, I'm not comfortable with items that are fragile and expensive. They could eventually get broken, and that would break my heart too.

Oh, Jo, You make me laugh! I'm still following you...just haven't had much time for posting lately. Glad to see your humor is still in tact.

I like quite a lot of BRITISH pottery, including Clarice Cliff, Moorcroft (very colourful), Josiah Wedgewood to name a few.

However, I was unable to comprehend how just one piece of pottery, no matter how rare (unique even) could fetch such a huge price.

It just beggars belief! Perhaps a Chinese businessman, company or even the government in China wanted it to 'come home'. But who were the other bidders? It takes at least two to tango at an auction.

That's amazing!!! I'm always hoping something like that will happen to me. I love antiques but so far no big $$$.

If it's in English and has no Japanese it was probably made after the Second World War. Anything ancient or valuable would probably have a 印鑑 or whatever the Japanese equivalent is.