Best Of Luck To Wills and Kate... 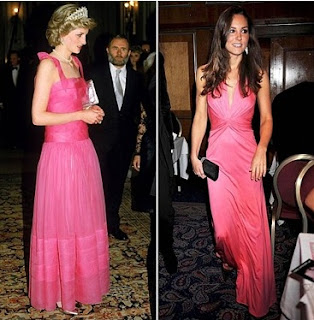 Now that Kate has landed her prince, I think there will be the inevitable comparisons to Diana. The world was enamored of Diana from the moment she stepped into the spotlight. She was a superstar and she eclipsed everyone else in the royal family. But she was equally as fragile, and didn't know how to handle her celebrity. By the time she was 23 years old, she was the Princess of Wales - the wife of the future King - and the mother of two princes. That would be too much for any 23 year-old girl.  Kate, on the other hand, is well-educated and more mature.

I predict Wills and Kate will get married on July 1, 2011, the date which would have been Diana's 50th birthday. And do you realize that, when she and William get married, Kate will be only seven years younger than Diana was when she died? Imagine that.

They appear to be a nice young couple, and I wish them the best of luck.
Posted by Jo at 8:05 AM

I feel very old when I see the interviews with William. It seems like yesterday that he was Diana's little boy running into her arms.

Yes they both do seem sensible and especially William, being a prince and all that..
I wish them luck and love (in that order - since one needs a lot of luck where lurve is concerned)

Well said. But since I don't believe in "LUCK" I wish blessings upon them.

I agree completely. I was thinking the same thing that it will be inevitable that she is compared to Diana. I read an article about her while at the grocery store the other day and the article was already having a side-by-side of her and Diana. I will definitely be watching their wedding on the news! haha.

I wish them both luck. I think Kate knows more about what she is getting into than what Diana and the other princess of Diana's generation did. I hope the royal family has learned some lessons as well.

Kate is a lot more attractive than Diana. Not that that means much.

it's such fun to watch royalty. hollywood
pretends, but royalty is much better at
it!

I wish them both luck and blessings. She is a beautiful young woman and he is so cute.

I can't wait to see this wedding. Its going to be the wedding of the decade.

Hi Jo - Last night I watched a full hour of Kate and William on TV. Katy has a good point which was emphasized in the program. Kate and William have known each other for much longer than Will's famous parents. Kate is more mature and she certainly photographs beautifully. She's actually been coached by the palace officials. The wedding is something to look forward to next year - having it on Diana's b-day sounds like a loving way to include his "mum."

It really does seem as if the palace learned something from the misadventures of the previous generation when it came to marriage. I always felt sorry for both Diana and Charles. Since even in 1980 the princess-to-be was expected to pass a purity test, the pool of potential royal spouses was incredibly limited. That's a key factor in how Charles and Diana, a mismatched pair on all levels, ended up marrying.

So the palace at least corrected their mistakes, putting emphasis less on breeding (and entirely archaic standards of "purity") and let William's heart choose.

I wish them a lot of luck and happiness also. What's really nice is that they are far more likely then William's parents to experience actual happiness.

Progress really shows in this pairing, doesn't it? Instead of a very young woman with no life experience, William is marrying someone with long experience in simply being a part of his life.

I think William's mother would be very pleased. I hope they don't marry on her birthday, though. Diana did a great deal of good in her life. No one did more for AIDS awareness in the early days, as an example, but she didn't have a lot of personal happiness. Beyond being a mother, of course.

I am thoroughly dismayed at some of the negative remarks in the media oveer here (and in Britian I might add)about this engagement. I have always been a great admirer of the British royal family and am looking forward very much to this wedding. I likes Dianna but I was not one of her devoted followers - personally I think she was not nearly the angel that was portrayed by the media. I somehow suspects that she used the media go get her own way as much as the media used her to sell copy. That is why I do hope fervently that people and the media will remember that Dianna was the previous generation and will leave her now to rest in peace and give Kate the chance to be KATE. She is quite beautiful (more so than Dianna in my opinion) with a style of her own. It will be very interesting to see whether she will build the image of the royal house or break it down further. I do wish her and Wills only hapiness and succes.

I wish them well, as I would any newly engaged couple. They have known each other for a while now, so I suspect there will be few surprises.

Great post Jo. I too wish them the best. It would be so beautiful if they did get married on Diana's 50th birthday. You can tell she is so much a part of Wills & Kates lives already.