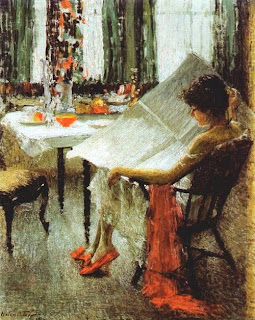 Time Magazine recently issued its list of the most powerful women of the past century.  If you scan the list, you will see that most of them started out from modest backgrounds, and whatever field of interest they developed, they all had the same intelligence, intellectual curiosity, strength and tenacity.

It has always been a misconception that women are the weaker sex.  They are not.  They are equal to men, just different -- and vive la différence.  We love men just the way they are.  For the most part, men are masculine and women are feminine, and we hope that never changes.  It's that difference that makes it all ... interesting.  But femininity does not equal to weakness.  Quite the opposite.  I work mostly with women, and in my experience women are extremely tough -- much more so than men.  Also in my experience there are two types of men -- those who respect women and love them, and those who are threatened by women, and try to demean them.  All women have experienced both these types of men.  In my opinion, there is nothing more masculine than a gentle man -- a gentleman. And there is nothing more feminine than a strong woman who knows her strengths, but still loves to be feminine. Coco Chanel, anyone?

Here is Time Magazine's list of most influential woman of the past century, and I wholeheartedly agree with the choices.

I once knew a male manager who was a positive tyrant - but who could NOT face a woman's tears. If he needed to administer disciplinary action to a woman he had to have someone in there with him. That someone was usually another woman. It was kind of funny, actually.

Love the list - made me feel proud for some reason.

Stronger in some ways, weaker in others, mostly just different. I like the list, and I can think of many more who could be on it.

No wonder Virginia Woolf is the last on the list. She suffered of depression. She finally drowned herself by putting rocks in her coat pockets.

Well said Jo and so VERY true. You hit the nail right on the head with what you said.
GREAT post!
~ GloW ~

I totally agree with you on this, and think that most women are stronger than most men, too! And the only people who think that women are weaker, are men! Cie la vie!

Jo, I agree with your statement one hundred per cent! We need each other for balance and support.

Woman are by far the stronger, I love them, by the way of my wife.
The list is outdated by not mentioning Sarah Palin.

Quite a penetrating essay on the topic, Jo!

I love that it's not just a list of celebrities but actual real woman.

If I were to make a blogger list of women who have influenced me I would definitely have you and DUTA at the top of my list Jo!

Just been catching up on all the latest Majority of Two's gossip :)
Vive la difference indeed! They forgot Queen Rania of Jordan on the list though - she's awesome. Speaking of, there's a royal wedding in the offing - it's going to be choc-a-bloc in the English papers :) And a soiree to which we are all invited at your treehouse! And Alexander Rose peering at you through the window!! Brilliant! The mother-in-law piece was interesting too - my mother has just become one... but so far, so good :) I'll keep an eye on her for my sisters-in-law!

It is difference, that unites.

Please have a good start into the weekend.

I am a bit surprised to see Aretha Franklin on that list.

What a list! And yes, there are two types of men and I've known both. I'm glad to be married to one who has many more women friends than men. I've often thought his feminine side is more pronounced than in most men. I would also have put Margaret Atwood on my list, since her books have influenced me for decades!

I think I will check out the magazine the next time I am at the store. That is quite a list.

Yes there are two types of men- Ihave except a copuple experienced mostly the negative types since I live in a country which thrives on chauvinism..

Jo meanwhile I do hope you have bought the cell phone :)

Vive la différence, indeed. The different strengths of each gender can bolster the other, and with respect, we can support the differences without trying to make it a competition. In a perfect world...

I love the differences between men and women. How boring would the world be if we were all the same!

"Also in my experience there are two types of men -- those who respect women and love them, and those who are threatened by women, and try to demean them."

My old lady ain't gonna trade me in for a different model, why isn't she on that list?

A most impressive list - regardless of whether they are women or men!

There is truth behind the fact that behind most successful men there is a woman - and quite often the man was even married to that same person!

And I think the reverse is true, too. Behind most successful women there is a man (and, again, often they are married to that person!).

If women were the weaker sex men would have the babies.