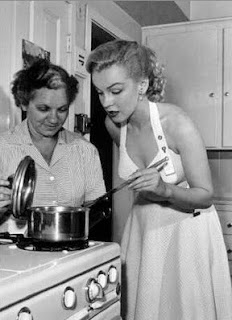 Who would ever have guessed that Norma Jean Baker was an accomplished chef? Well, in fact, Norma Jean was accomplished at many things including painting, writing poetry, cooking, acting, and inventing the persona, or alter ego, of Marilyn Monroe. In many ways, Marilyn Monroe was Norma Jean's undoing. If Norma Jean were on the scene today, she would eclipse almost everyone else out there.  She was amazing.  In 1999 two cookbooks in her personal effects sold through Christie's Auction House, one was “The New Fannie Farmer Boston Cooking-School Cook Book” and the other was the 1953 edition of “Joy of Cooking”.  Both books were filled with her own recipes, including notations in the margins. 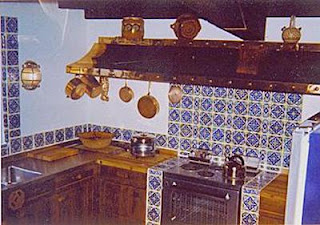 This is a photo of Marilyn's kitchen, circa 1961.  Who wouldn't love this kitchen today.  I love the copper range hood, and the well-used cutting board.  Look at the copper pots.  Those are the pots of a serious chef.  If you look above the range hood, you can see a pottery tea pot, identical to one you would find in everyone's home today. 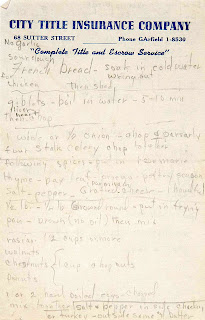 There has recently been a new book published called "Fragments", and on page 180, in Marilyn's own handwriting, is a recipe for turkey stuffing. The writers for the New York Times described it: When we gingerly tossed everything together in our largest bowl (the recipe yielded more than 20 cups), we were amazed to discover one of the most handsome stuffings we’ve encountered. The odd elements, like the profusion of raisins and the chopped egg, suddenly made sense, becoming pleasant color contrasts. Moreover, the mixture was delicious, a nice balance of vegetables, meats and bold seasonings, just faintly, tonically sweet from the raisins. Even the texture was superior, a fluffy, damp blend that packed well into a chicken cavity and emerged loosely gelled. So ... with the Holiday Season coming up -- Thanksgiving in the U.S., and Christmas -- here is Marilyn Monroe's recipe for turkey stuffing.

Time: 2 hours
(No garlic)
A 10-ounce loaf sourdough bread
1/2 pound chicken or turkey livers or hearts
1/2 pound ground round or other beef
1 tablespoon cooking oil
4 stalks celery, chopped
1 large onion, chopped
2 cups chopped curly parsley
2 eggs, hard boiled, chopped
1 1/2 cups raisins
1 cup grated Parmesan
1 1/4 cups chopped walnuts, pine nuts or roasted chestnuts, or a combination
2 teaspoons dried crushed rosemary
2 teaspoons dried crushed oregano
2 teaspoons dried crushed thyme
3 bay leaves
1 tablespoon salt-free, garlic-free poultry seasoning (or 1 teaspoon dried sage, 1 teaspoon marjoram, 1/2 teaspoon ground ginger and 1/2 teaspoon ground nutmeg)
1 tablespoon kosher salt, plus more to taste
1 tablespoon pepper.
1. Split the bread loaf in half and soak it in a large bowl of cold water for 15 minutes. Wring out excess water over a colander and shred into pieces.
2. Boil the livers or hearts for 8 minutes in salted water, then chop until no piece is larger than a coffee bean.
3. In a skillet over medium-high heat, brown the ground beef in the oil, stirring occasionally and breaking up the meat, so no piece is larger than a pistachio.
4. In your largest mixing bowl, combine the sourdough, livers, ground beef, celery, onion, parsley, eggs, raisins, Parmesan and nuts, tossing gently with your hands to combine.
Whisk the rosemary, oregano, thyme, bay leaves, poultry seasoning, salt and pepper together in a bowl, scatter over the stuffing and toss again with your hands. Taste and adjust for salt. Refrigerate, covered, until ready to use as a stuffing or to bake separately as dressing.

Just the other day I saw Marilyn Monroe's stuffing recipe in the sidebar while researching something else. I was intrigued and meant to go back, but forgot.

She was really a most interesting and multi-talented woman so it's really a shame that she is remembered primarily as a dumb blond bombshell sex symbol. (She was anything but dumb.)

And yes, that was a wonderful kitchen. I adore copper pots, and the blue and white tiles are lovely.

I think that, for many of us, it is difficult to think of her as anything other than a tortured soul, who gave up on life way too soon.

This post gives us some hope that she managed to find satisfaction outide of the public view -- at least, sometimes.

Maybe cooking was her own personal therapy.

Interesting how people have so many facets to their personality. And how they are sometimes known for all the wrong reasons..

I think Hank Chialanski was Charles Bukowski's Marilyn Monroe. That being within that the outside saw so Charles could just live a life he considered normal.

Its so much easier to casually put people into catagories than it is to get to know the whole person.

I never would have thought of Norma Jean.. future Julia Childs. We really did lose a lot when she died so young.

I remember where I was when I heard she died, as many people remember JFK's death. She was a personal icon and as I watched her go through the last few painful years of her life, I grieved for her. Now I know she had cooking in her life, and somehow it is comforting to know that. Thank you, Jo.

This is fascinating. This is a side of her I've never heard of, and it makes me want to discover more. Thank you.

Hard boiled eggs in turkey stuffing! Who knew?!?!? But I'll give it a try. Sadly, she was a smart woman that few gave much credit to.
Thanks for sharing, jj

Piggybacking DJan, I also remember the day MM died...and it is nice to know she enjoyed creativity in the kitchen, as well as, on the big screen.

However, I must firmly disagree (breaks my heart) with Norma Jean on one teeny, tiny issue...in the South, stuffing is always called dressing and always baked separately as a side dish... diversity, don't you just love it! Again, Jo...thanks for the great post!

that makes me feel sad. maybe she
wouldn't trade her career and fame
for raisins, but she certainly ran much
deeper than anyone would have
thought.

you are amazing for finding such
interesting stories!

Hi Jo: I am also a huge MM Fan...Here is link many might find interesting. Last summer, the last home she lived in was put up for sale. She originally bought it in 1962 for $90,000 and last July the owners had it on the market for $3.6 million. They show pics of the house. She never swam in the pool. Check it out:
http://hookedonhouses.net/2010/07/15/marilyn-monroes-brentwood-house-for-sale/

Interesting, indeed. I want to give the recipe a try!

What a cute, functional kitchen 'the One and Only' had!
She was a fascinating woman from any angle one looks at her.
No wonder two presidents , the Kennedy brothers John and Robert are remembered by some, mostly for their affair with her.

I'd change the tiles in that kitchen.

What a wonderful look into the life of someone we all have heard of yet don't really now much about. 20 cups of stuffing? Wow!