Pear Shape Or Apple Shape...? Can You Remember...? 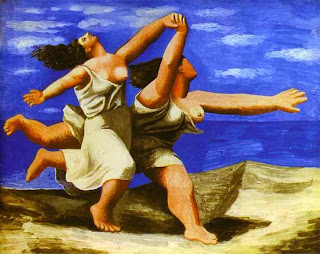 As if women didn't have enough reasons to worry about their weight, according to CNN, here is one more:

The more a woman weighs, the worse her memory, according to research released this week from Northwestern Medicine at Northwestern University in Evanston, Illinois. The effect is more pronounced in women who carry excess weight around their hips, known as pear shapes, than women who carry it around their waists, called apple shapes.  The reason pear-shaped women experienced more memory and brain function deterioration than apple-shaped women is likely related to the type of fat deposited around the hips versus the waist.

"We need to find out if one kind of fat is more detrimental than the other, and how it affects brain function," said Dr. Diana Kerwin, the lead author of the study and an assistant professor of medicine and a physician at Northwestern Medicine. "The fat may contribute to the formation of plaques associated with Alzheimer's disease or a restricted blood flow to the brain."

"The study tells us if we have a woman in our office, and we know from her waist-to-hip ratio that she's carrying excess fat on her hips, we might be more aggressive with weight loss," Kerwin said. "We can't change where your fat is located, but having less of it is better." ... CNN

What about if you happen to be a little bit chubby all over? Does that mean you can remember some things and not others?  How on earth does where a person carries weight affect how their memory works ... unless both are related to a sedentary lifestyle.

I remember another "scientific study" about 20 years ago that concluded with the finding that women with larger breasts have smaller brains.  That caused quite a stir, and was eventually disproven.  I think the only conclusion one can reach from these studies is that -- once again -- women are being stereotyped according to body shape.

Katy, I had not heard that about murderers. Holy doodle! I think with this study it is all about where the fat is deposited. It's just silly. :-)

I was 105 most of my life, now take the last two numbers and turn them around. This fat stuff is horrible. I'm an apple BTW with a big chest, the only thing this means is I wear an XL shirt and have size 8 shorts.....I must be able to remember but be dumb huh? LOL

Don't you just hate stereotyping? We are all different and in my opinion, special. I'm an apple, but I know many pears who have excellent recall. I, on the other hand, tend to have lapses of memory from time to time. Goodness help us when these silly studies convince us we are less than we are. As always, love your posts, Jo.

I think there are too many reseachers with too much time on their hands. Where do they dream up this stuff?? And next week they'll swap their results.

There is actually a correlation between where fat is stored in the body and diabetes (it has to do with hormones, estrogen, glycogen etc). "Apple" shapes (belly fat... men included) are more prone to it than "pears" (hip fat). There are genetics involved too. There is obviously now a correlation with other traits. It's not "sexism" or "bodyism" but hormones.

oh dear, i get weary of worrying
about my weight. it is a constant
battle.

My husband told me about this (he'd read it elsewhere) & it simply makes no sense at all to me.

The visceral fat in "apple" shape folks is much, much worse for their health than normal body deposits. I can't help but wonder about the original study & if they counted their stats to rule out other things, like diet, exercise, general over all health, drug use (meaning prescriptions), etc.

Many studies are poorly designed & you can make the stats show anything you want them to. I don't trust such studies.

TC, I like that -- you just switched the numbers. I think a lot of us do that in the long run. *heh*

Connie, sometimes I think these studies just get a little too silly. :-)

Susie, I know...! Next week it will be something else.

Mac, yes, I know pear shape is better than apple shape, as far as apple shape being at higher risk for heart attack, stroke and diabetes, but I can't see the connection to memory. Although I must admit, I have a co-worker who is pear shaped, and she does have a terrible memory... Maybe there is some connection.

Lea, it is a constant battle for me too. I watch Dr. Oz, and I always do all the things he recommends (never eat processed food, never eat saturated fat...) etc... *sigh*

Kathryn, I do know that belly fat (omentum) is worse than hip fat, but I guess the pear shapes have their disadvantages too. As I said, my co-worker who is pear shaped really does have a terrible memory.

I can't ever remember which fruit I am, or how to figure it out. Why do all women have to be apples or pears anyway? What's wrong with peaches, or bananas, or apricots? How about kiwis?

For years they've said it was healthier to be a pear. Neither one seems to fit, but my memory is fine, regardless of my body type.

Susan, I think I am a pineapple, and sometimes just as prickly. :-) But seriously, it is genetic, and I wish I were a pear, but sadly I am definitely an apple.

I happen to believe that women with big breasts have smaller brains. Why else would they pander to immature male daydreams and pay surgeons to put potentially cancer causing or health threatening plastic/silicone implants? Surely it's not the breasts that need augmentation but the brain.

Being a pear-shape myself, this is a bit disheartening. I just hope maybe what I'll forget is that being pear-shaped is bad. ;-)

You know, what I've come to realize is that this is what scientists do, and we have to love them for that, because without them we'd still be getting polio and dying in droves from influenza ... but ...

Here's where the media comes in. Scientists conduct a study and release the findings. Another group of scientists replicate that study and ... oops ... different results. So another group of scientists comes in and so on and so on, until some form of temporary certainty is reached ... which they are absolutely willing to let go of as soon as they see results that prove otherwise.

These results used to come out only in obscure journals. But now the media, which has 8 bazillion outlets that have to be filled 24/7, publishes these as TRUTH the second they come out. And once one outlet runs with it, they tell two friends and so on and so on.

I just wish we got more than sound bites. I'd like the media to tell us the whole story--as the scientists tell it.

Oh I'm a total pear & I buy the theory in total. I worry sometimes about all the things I can't remember - I've been shaped like a pear my whole life (or at least since age 13 or so). That's a lot of years of forgetting things!

Jennifer, you're so right. I think findings are published before they are peer-reviewed, and then when they are -- oops -- someone else gets a different result. I am definitely not pear-shaped, I have a good memory, but .... um ... what was I saying again ...? :-)

Dana, I wish I were pear shaped. It's easier to buy clothes for pear shaped women. It was what used to be called hour-glass figures, so you are very lucky. :-)

Oh no Jo - it's not easy at all because my waist is disproportionately smaller than my hips. Pant & skirts that fit my hips are at least two sizes too big for my waist. If I were a person with money I could have everything tailored & be happy with my shape. As it is I wear a lot of tops that cover the big gap in my pants.

Really, the only people who don't have trouble shopping for clothes are shaped like Twiggy :)

May I add that I completely agree with Calvin the Squirrel? If I lost my breasts to cancer, I might consider implants, but otherwise it's simply ridiculous and sad. True aesthetic beauty relies so much on proportion. Bigger is really not always better.

Cor that was interseting Josie - but I've forgotten what I read! Hmmm time for another creamcake honey!

Dana *chuckle* yes. I suppose you are right. It would be lovely to have a very small waist, though. *sigh*

Denise, *heh* I guess folks will find an excuse for anything, won't they? I suppose there is some scientific basis in fact ... but ... for memory? Oh, goodness. :-)