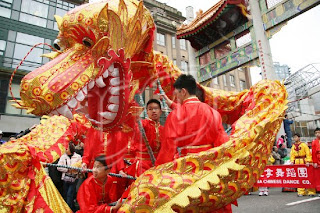 Every year Vancouver has wonderful Chinese New Year celebrations, and this year it starts today, January 26th. Chinese New Year starts with the New Moon on the first day of the new year and ends on the full moon 15 days later. New Year's Eve and New Year's Day are celebrated with family and friends. Departed relatives are remembered with great respect. 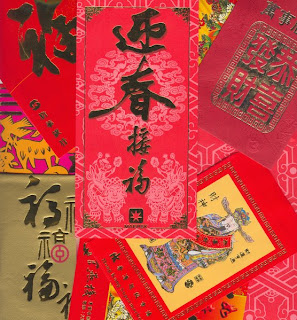 At Chinese New Year celebrations people wear red clothes, decorate with poems on red paper, and give children "lucky money" in red envelopes. Red symbolizes fire, which according to legend can drive away bad luck. The fireworks that shower the festivities are rooted in a similar ancient custom. Long ago, people in China lit bamboo stalks, believing that the crackling flames would frighten evil spirits. There is always a wonderful parade in Chinatown here in Vancouver, attended by more than 100,000 people. Vancouver's Chinatown is mostly a tourist area now, filled with fabulous restaurants and stores. I love spending time there, and the munchkins and I often go there for Dim Sum. 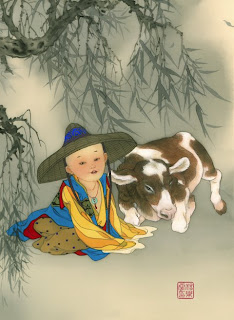 This year is the Year of the Ox. The Ox symbolizes prosperity through fortitude and hard work. Those born under the influence of the Ox are fortunate to be stable and persevering. The typical Ox is a tolerant person with strong character. They are very tenacious when deciding to accomplish a task. Ox people work hard without complaints at work or at home. They know that they will succeed through hard work and sustained efforts, and do not believe in get-rich-quick schemes. The Ox people cherish their private lives and are not usually very adventurous. They can be loners. Ox people are great traditionalists, they like the familiar.

One year I had the privilege of being invited to spend a Chinese New Year luncheon with some Chinese friends of mine. It was so much fun. There was more food than I had ever seen before, and all the little girls were dressed in red velvet dresses, and the little boys in little tuxedoes with red vests. They were skipping around as only excited little kids can do! The best part for me is the parade with the lion dances and the Chinese dragon dances. The parade is always really noisy with drums and firecrackers and music, and everyone having a good time.

I was in China not to long ago and I can imagine what it looks like over there today. How I wish to be there right now.

We'd better start learning about all that's chinese as it seems China's going to be ,in the not far future, Superpower 1.

Sounds like a truly wonderful way to celebrate their New Year. I think the Chinese tend to have as many, if not more, superstitions than we in the UK. We have No.7 as a lucky number, the Chinese have No.8 (I don't know what their "unlucky" number is; ours is 13 for some reason). When buying a Chinese takeaway I always hear the wok being thoroughly hammered to get the last grain of fried rice out! Apparently it is deemed unlucky to leave a grain in the wok. Maybe it's more of a "waste not want not" attitude, which is even more important in my view.
Phil

We celebrated Chinese New Year with friends who own a Chinese restaurant. It was a wonderful evening.

That sounds like a lot of fun...parades, etc. Love the dragon picture.

Singapore is also celebrating chinese new year today. Everything is decorated In Singapire too, and red seems to the dominant decor color. Your blog today explains the significance of red in China. Thanks for this informative post....!!!

I was watching a movie last night and they were in Toyko and went to "China Town," in Toyko. I thought that was kind of funny.

That sounds like fun. I can remember as a child watching the parades on TV and I too, loved the dragon dancers! I wish they had those parades here in the US. (If they do, I have never heard of one.) My children would love that. We all love Chinese food!

In Malaysia, we always get two days of public holiday. it's the time for food and reunion...

Chuc Mung Nam Moi to you Jo. I thought I should add my New Year greeting as we Vietnamese also celebrate the Lunar New Year. It is called TET in Vietnamese. I have been a faithful follower but was a bit shy to add my blog to your growing list of followers :)
I enjoy your writing, agree with many of your views, disagree with a few but definitely learn a lot. Thank you for sharing and keep up the wonderful writing.
TOTA
PS: Arley, if you were in New York Chinatown, you would see the celebration which could be as grand as if you were in China.
Philip H, my husband laughs at me because I clean my plates just like you described. We Asian people don't like to waste any food, especially fried rice :)
Best wishes to all, may you enjoy good health, prosperity, love and happiness for many years to come.
A Hockey/Football fanatic in St. Louis, Missouri

Jo, this is a wonderful, descriptive, informative report. I always have felt that if I were left on a desert island and had to choose what kind of food I would want, it would be Chinese for the spicy taste and the wide variety.

And if I ever lose more weight I would love to get into one of those Chinese cheongsams. :-) :-)

Thanks for a lovely post, as is your style.

Now I have a craving for Chinese food.

Great post. Prosperity through hard work, eh? Now, if only we can get the millions of people that are out of work in the US some jobs that they can work hard at, they can be real prosperous!

We don't have anything like the Chinese New Year parade where I live but your description brings it to life,it must be quite a sight all that colour and noise it sound wonderful.,oh and thank you for the kind words on my attemts at poetry.

Thank you for what you wrote about the Ox. I was born under Ox so I felt I could relate to what was written. You don't need to reply, you have over 500 followers but thank you.

Happy Chinese New Year to you, too!

I wore a RED and white striped shirt today (very thine stripes...!) and a RED tie! AND I told everyone it was Chinese New Year and to go out and celebrate!!

Of course, out here in the sticks of Iowa, well, you know.... let's say that we do not have a great deal of diversity unless you count Swedes and Norweigans and English and Germans and Irish and Italian ancestory -- and, of course, the French -- after all, much of our state is name after the French!

The primary diversity we have in Iowa now is the increasing number of Hispanics who have come to Iowa to work in meat packing plants -- and don't get me started on how this state has treated these people who just want to work and make some money and do the work other people refuse to do....!

I hope you do something FUN later today or tonight -- and during the entire 15 day celebration...!

Hi, I'm new to your blog but I wanted to thank you for posting this! It's so great to see appreciation of such a great tradition alive! As I was born in HK but now living in the States, I missed the sites, the crowds, the food. This sends back memories! I hope to visit Vancouver one day soon!

Firefly, lucky you! I would love to go to China.

DUTA, yes, it would seem to be that way!

PhilipH, yes, the Chinese do have a lot of superstitions, both lucky and unlucky.

Uought2b.a.dog, I love the dragon dances and the lion dances too.

Introspection, yes, we had a lot of red at work today too. (Do you have a blog?)

Charles, yes, that does sound funny! Chinatown in Tokyo.

Arley, I'm sure there must be a Chinese community near where you live. Your children would love it!

TOTA, welcome! And Chuc Mung Nam Moi to you! We have a lot of Vietnamese people in Vancouver. I LOVE Vietnamese food. Yum!

Lorna, Chinese food is so healthy and fresh, isn't it? Chinese and Japanese are my favorites too!

Mary Ellen, well, I guess you folks need to bring some of the jobs back from China...!

Jay Dee, you would love the Chinese New Year's parade. (I thought your poetry was very good!)

Griever, are you born in the year of the Ox? Well, then this is your year! Celebrate! :-)

Russell, you wore red? Wow! That's great. So did I. And yes, we have people here too who do the jobs no one else wants to do.

Themasterpat, if you were born in Hong Kong, you would feel right at home in Vancouver. We are almost a sister city, and we have a lot of people here from Hong Kong. You should visit Vancouver one day!

Poutalicious, "Kung Hei Fat Choy!" (I like your new avatar!)

Reyjir, I think there are several spellings, and I never get it right. :-)

Haha. I'm sure the Chinese will forgive you. After all, it's a new year. :D

Do you think they also have New Year resolutions or an equivalent?