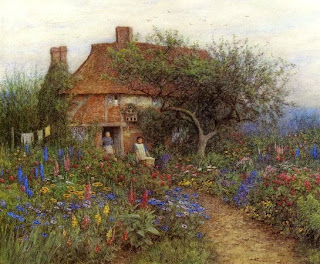 A Cottage Near Brook
Helen Allingham

When I was a child, my mother and father loved to garden. My parents' garden was featured in magazines a few times, it was so beautiful. My father built unusual rock gardens and my mother filled them with flowering cactii and other wonderful plants. On Sunday afternoons we used to go for drives along country roads -- Cherry Creek Road and Beaver Creek Road -- and get cow manure for fertilizer from some of the old farmhouses. One Sunday afternoon it was late as we were driving back, and the sun was just setting as we drove past a cottage with beautiful delphiniums in the front yard. My parents stopped the car to have a better look. These delphiniums were magnificent, at least six to eight feet tall. My mother was shameless famous for taking cuttings of unusual plants from public parks, and rooting around in abandoned fields for daffodil or tulip bulbs.  Mom said, "I wonder if the people who live here would give us some seeds or cuttings."

Here were go again. I slouched further into the back seat of the car.

An ancient, old man and his wife greeted my parents and invited them into the house, so I went with them. There was no electricity, just a faint twilight came in through the windows, and as my eyes adjusted to the light, I could see the house was immaculately tidy. There were little pots of primroses placed throughout the living room and starched, white, lacey doilies on all the furniture.  I wondered how long the elderly couple had been together, and if they had lived in the house with their children when they were young.  I imagined they had lived there for all those years without electricity.  My parents chatted with them for a few minutes, and the woman told my mother to take cuttings of anything she liked in the garden, which she did.  The delphiniums soon found a place of honour in the garden on the west side of our house.

A few weeks later, on one of our Sunday afternoon drives, we went past the house again.  My mother wanted to stop for a moment and chat with the old couple, to let them know their cuttings had found a good home.  No one was there, and the house looked dilapidated and abandoned, and the once well-cultivated garden looked unkempt.  My mother called over the fence to the neighbours to enquire about the elderly couple.  The neighbours looked puzzled, "What elderly couple?"

"The old man and his wife who live here," said my Mom.

"No one lives there," said the neighbour.  "An elderly couple lived there many years ago, but that house has been abandoned for over a decade."

None of us spoke on the way home, and we never mentioned it again.  My mother pulled the delphiniums out of the garden and replaced them with something else.

Some things in life just have no explanation, and it's best not to try...
Posted by Jo at 9:17 AM

This is a great story.

Yes, i agree with Calvin.

The hairs on my neck are bristling!

Wow what a story.....Happy Halloween!

So you found a painting that matched your story. They're nice together. I don't understand who Helen Allingham is.

Yes sometimes its just better not to demand an explination for things. Sometimes things should just be. Its a shame your mother pulled out the flowers, though I guess one can't blame her for being freaked out.

And I love that painting. Enchanting.

Love this story - perfectly goosebump making for Halloween. But I would have kept the delphiniums.

Isa - she's the artist who created the painting.

WHAT? NO ZOMBIES? YOU NEED AT LEAST ONE GOOD SPOOK STORY FOR HALLOWEEN. AND THIS ONE WAS GREAT. THANKS JO.

Yowzah.
I have chills running all the way down my body!

What a PERFECT Halloween tale! I am sorry that your mother pulled up the flowers, but I also understand it, too. That picture is absolutely the most perfect for the story, too...

Wow. An amazing story. I used to take cuttings and even on occasion, plants, that I found growing wild along country roads (or freeways)and also daffodils from abandoned fields, so your mom and I were kindred spirits. But I have never been entertained by ghosts as far as I know. I wonder why they made themselves visible to your family.

I'd have left those delphiniums right there, just to see what happened! don't you love that some stories have more than one ending?

I'm with Pauline. I'd have wanted to know what happened with the flowers!

What a great story for a dark Halloween night. SMILE

There are such things in heaven and earth...

My stepfather was a gardener, and he was also shameless about asking for cuttings. None of his stories were ever as interesting as this one, though!

Wow beautiful story and touching too in some odd way loneliness of the old couple seeping thru each word..

Love it Jo Love it!

A fitting tale for Haloween weekend. WOW. I just had a shiver run down my spine.

Makes you wonder, doesn't it?

What a great story. Loved it!

Truth is stranger than fiction ..... creepier, too!

Oh, that's a wonderful story. I wish I could have an experience like that! And I would have kept those flowers and would have tried to learn everything I could about the house and that sweet old couple.

Exquisitely written Jo. Delphiniums are attractive and stately blooms - handle with care as some are quite poisonous ...
I can't seem to get them to grow in MY scruffy garden.
Mayhap they need a gardener who keeps his house tidy; I'm not a tidy guy, and I'm too old to change.

Thank you for one last great Halloween shill!