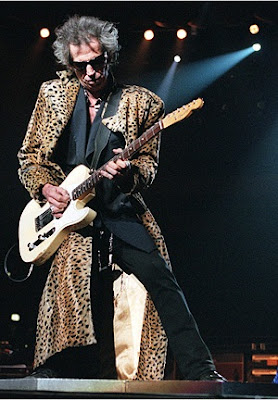 Today Keith Richards is releasing his autobiography entitled simply "Life". And what a life. I always thought Keith Richards was the coolest of the Stones. He had a certain dark je ne sais quoi that the rest of the Stones didn't have. It turns out he's actually quite a decent man. His public image and private life are poles apart. He has been married to ex-model Patti Hansen for 27 years, and he has not cheated on her once. He is an avid reader and owns an extensive library. He once disclosed that it was his ambition to become a librarian. Keith Richards a librarian? Who knew!

Keith Richards and Mick Jagger are not particularly close, and Richards sometimes refers to Jagger as "Her Majesty" and "Brenda".

In August 2009, Richards was ranked  No. 4 in Time magazine's list of the ten best electric guitar players of all time, and his riffs in "Sympathy for the Devil" are the best guitar playing I have ever heard. The Rolling Stones have always been my favorite band, and I always preferred them over that other band ... who shall remain nameless. I once saw the Stones in concert on the occasion of Keith Richards' birthday.

I am looking forward to reading this book, and perhaps I will put it on my "Christmas wish list" ... just in case. In Richards' own words he says, "What I hoped was worth sharing with people turned out to be far more important than I could possibly imagine."

And just in case you have been living on the dark side of the moon and haven't heard Keith Richards' guitar-playing in "Sympathy for the Devil" ... enjoy!

I may end up reading this too. I saw an excerpt in a mag last night but got interrupted before I was able to read it.

You have to wonder how much of his life he really remembers.

At least the Stones survived all these years. Not many groups can say that. No group of their statute can say that.

Who knew you were a Rolling Stones fan? Me too Jo! It's one band I never saw live and I really, really wanted to. The Stones are the essence of rock and roll for sure - a great post and a book to savor!

I've always liked Richards, too. When he and Patti Hansen got married, they seemed incredibly unsuited to one another, yet they've had one of the most lasting and apparently successful marriages in show biz, especially the world of Rock.

I always enjoy musician's autobiographies and will read his, too.

I was just visiting another blogger who purchased the book today. It sounds like it would be a great book. I read a bit about Keith on yahoo and I never knew he was such an avid reader! I hope you get the book for Christmas Jo and then review it for us. Take Care!

I have a soft spot for scary Keith too. Bet he's fragile along with the blazing talent....Mick is too over the top phony for me too.....

It's funny how we pigeonhole people. I never would have guessed that Keith Richards was so different from his image. Very interesting...

The first time I saw the "Stones" I was about 15. I thought it was a spoof-a joke making fun of the rock groups. Don't you know Keith has some fascinating stories to tell...if he can remember them. D

When the world ends all there will be left is Keith Richards and roaches, but the roaches won't last long because Keith will smoke them.

Funny, but you don't look like a rocker in your photo.

Love the Stones, too.

These guys are still as popular as they were in their young days, and like Elvis and MJ, they will be long after they are gone.

I've always liked the Stones. And I'm very interested in reading this book. Must admit though...I far prefer that other band.

Charles, I have read a few excerpts too, and it looks fabulous.

Russell, they definitely are survivors, aren't they?

Susan, I read where Keith Richards was disgusted with Mick Jagger for his womanizing. Interesting, hey?

Alicia, I hope I get the book for Christmas too. *heh* And then I will let you know all about it!

Margaret, I think that is what will make the book so interesting. I can hardly wait!

Donnetta, Mick Jagger does act like a spoof of rockers, doesn't he?

Wolynski, I guess I don't look like a rocker in real life, either. But I have had my moments. :-)

Jonker, yes, the Stones definitely are survivors, and they have aged like good wine.

Carla, it looks like a good book, doesn't it? I always preferred the "bad boys" of rock. :-)

Wow, Jo, I never took you for a girl who liked bad boys. Now we know!

Here's the Fresh Air interview with him October 25th: