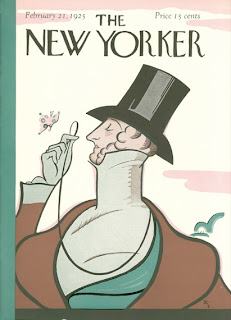 I absolutely love my New Yorker Magazine. The only problem is, so does my letter carrier. She also likes my Time Magazine. We have had the same letter carrier for several years, and on several occasions she has pilfered borrowed read my magazines before she has delivered them. How do I know this? The mustard stains are a dead giveaway. A few years ago I went out for a short stroll. I checked my mail box before I left, and my Time Magazine was there in my securely locked mail box. I left the magazine there thinking I would pick it up on my way back. When I got home, more mail had been delivered, but the Time Magazine was gone. I had long suspected some hanky-panky, but to me this was proof.  And now the same thing is happening with my New Yorker Magazines.  At one time they were being delivered on the same day that the newstand issues were on the stands, and the on-line copy was sent to me.  And then they started to be a few days late, and then a week late, and now they are consistently two or three weeks late.  Often the cardboard inserts are torn out of them when I receive them.  During the summer Ms. Letter Carrier was on vacation, and a young fellow replaced her.  Et voila!  My New Yorkers arrived on time and in pristine condition.  As soon as she came back, the old pattern emerged.

Just recently Canada Post discovered one of their letter carriers had been storing mail in the lockers of the men's change room at Canada Post's office in Richmond. RCMP were called and searched the man's home, where they found more mail dating back about seven years, as well as five unregistered handguns. RCMP is recommending he be charged with one charge of mail theft, five counts of possessing a firearm.

If my letter carrier is that desperate for my New Yorker Magazine, she is welcome to read it.  I just wish she would deliver it as soon as she's finished -- minus the mustard stains, please.
Posted by Jo at 7:51 AM

I've had that problem too... minus the mustard stains! Wow! The carrier didn't open the one in plastic wrappers but my Nat Geo mags were always "reviewed".

Could you have it delivered to a different address off that carrier's route? work or a friend's home maybe.

Oh no! This is quite an incovenience; no, a crime; a federal crime.

Well, I can see where you wouldn't want to report her - but I would be quite irate if I were you!

I'm trying to let all my magazines lapse - it's a chore to read them now. I'd rather read blogs LOL.

The mail carrier had years worth of mail stacked up in his locker and home and they are only recommending that he be charged with ONE count of theft? One would think they would charge him with much more, even if they threw some of the charges out later. I wonder what the recommended sentencing is for that kind of thing.

Honestly, I wouldn't know if people were stealing my mail or not because I only check it when I know my bills are due. Still the whole thing seems like a creepy invation of privacy.

That is so strange. I've never heard of that happening but I can see how it could happen.

the real problem is that you have no idea what else you may not be getting that you should be getting. Is that clear? My point is if they would steal something as trivial as a magazine subscription, how can they be trusted with things like money and jewelry? Down here in the lower part of America we are quite used to our postal deliverers possessing firearms. In fact it's rather expected. But so far they limit themselves to shooting up inside the post office and not the postal customers. I recommend you contact the authorities and have the situation rectified. Because you can't trust the government workers – – who can you trust?

I laughed right out loud at the comment, 'if you can't trust the government workers, who can you trust?'

That's a Federal Crime in the U.S. Shame on your carrier!

That same thing happened to me with my New Yorker. I complained to the publisher. Nothing changed. One day when I was at the door when he arrived and the magazine was delivered I asked him if he would like to have magazines after I read them. He said he would! So I leave them in the box after reading and he takes them away.

No mention of the initial problem. No admission of what was happening. No more delivery delay.

I know I could have turned him in and I know what he did was a crime but he helped me when there was bad weather and even knocked on my door to check on me once when I'd not gotten the mail the day before. It worked out fine this way.

Oh, Jo...that's horribly hilarious!!!! ROFL...but at the same time, I feel so bad for you...actually don't know whether to laugh or cry...I'm with you. She should at least avoid getting mustard on your magazines!!! ~Janine XO

Hmmm... I stopped subscribing to TV Guide because I never got them on time...Maybe it was my mailman?

Wowzers!! At least she has good reading tastes!! That would really drive me nuts though. I really look forward to my mail and would be so frustrated to think that someone had read it before me!! It would really ruin the sit down with magazine and cup of tea moment!

You are kind....mine's always late also. If I had the evidence you have...I'd not rat the carrier out either I guess. Perhaps you could ask her plainly to read faster?

Charlene is a smart lady. I think the way she handled a similar situation was brilliant, a true win-win. You should not be inconvenienced and your mail carrier is committing a crime - tampering with the mail is certainly a crime in the US and I assume, in Canada as well. But perhaps some variation of Charlene's solution will work for you and allow you to have first crack at the magazines you pay for, hold the mustard.

All our magazines come in sealed plastic sleeves when you subscribe to them for just that reason. I'm actually surprised that your's don't.

O! Jo! you are way to nice about it, I would be contacting the post office in my area and letting them know..........and then charge them for a new mag....you have paid for new item not some tattie thing that has been used by the carrier........goodness me that is Horrid. hugs Lee-ann

As others have pointed out, it is a crime to tamper with mail, but I guess the carriers figure a magazine is fair game. Wrong! I think I would have a little confrontation, private of course, and see if I could alter the situation. You are very patient!!

I wouldn't confront your carrier directly, but I wouldn't let it continue.

You can go about a confrontation in a round about way by contacting the subscription department of New Yorker and asking them to do a tracking of your magazine. They will file a tracking notice, which will eventually wind up at your local post office, and I think she would be hard pressed to continue her shenanigans as her supervisor will probably question her.

I had to do this several years ago for my Time and Newsweek magazines that were being mishandled.