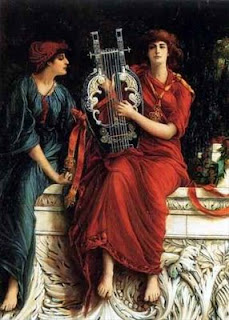 Have you ever experienced one of those delightful little forms of torture known as an ear worm? In case you are not familiar with ear worms, they are a portion of a song, or a tune, that plays over and over ... and over ... inside your head. According to research by James Kellaris, 98% of individuals experience earworms. Women and men experience the phenomenon equally often, but earworms are more likely to last longer for women and to irritate them more than men. The psychoanalyst Theodor Reik used the term haunting melody to describe the psychodynamic features of the phenomenon. The term Musical Imagery Repetition (MIR) was suggested by neuroscientist and pianist Sean Bennett in 2003 in a scientifically researched profile of the phenomenon. Another scientific term for the phenomenon, involuntary musical imagery, or INMI, was suggested by the neurologist Oliver Sacks in 2007. People with obsessive-compulsive disorder (OCD) are more likely to report being troubled by ear worms - in some cases, medications for OCD can minimize the effects. ~~ Wikipedia.

There is a blogger whose blog I enjoy visiting very much, and I usually visit her blog in the evenings -- my favorite time for blogging.  She plays music on her blog, and I invariably end up with the music playing in my head, over and over ... and over...

It's really a lovely piece of music, and I think I would enjoy it if I were to hear it once.  But twice ... three times ... not so much.  Arthur C. Clarke, the science fiction writer, once wrote a short story called “The Ultimate Melody”, where an ear worm drove the listener mad, and he ended up in a catatonic state from which he never awoke. I can definitely see that happening. However, in my case the ear worm had the opposite effect, and on Monday night I lay awake at 1:00 a.m., 2:00 a.m., 4:00 a.m., as the ear worm played in my head, over and over ...

Last night I went to bed early and I slept for 10 hours, no music, no ear worms, just blissful, quiet Zzzzzzzzzzs.
Posted by Jo at 12:48 PM

I had that happen to me once, the song "It's a Small World" would just play over and over in my head! Glad you had a blissful night's sleep, no ear worms...

Oh DJan - my mom & I got stuck in the It's a Small World ride at Disney World one year. I can't even THINK about that song anymore LOL.

I get earworms too, but they don't usually keep me awake. They might infiltrate my dreams. What's funny is that I'll wake up with a whole other song in my head.

I'm in Orvieto, Italy tonight and I wasn't thinking about It's a Small World AT ALL until just now.

"...earworms are more likely to last longer for women and to irritate them more than men."

I don't know some men can really irritate the shit out of you!! LOL. I know that is not how that reads but I thought it was funny.

I can't tell you how many times I have heard a commercial with a certain jingle in my head and ended up singing that tune for the rest of the day!! Dang earworm!

Jo... I love this post. I suffer from Cronic earworms, although until today I didn't know what to call them.
My husband and I are huge music fans...all genres and when a bit of song sticks it is stuck good. Sometimes we even intentionally plant earworms in each others ears. All I have to do is sing a bit from lets say... Windy... you know...who's tripin' down the steets of the city...everyone knows it's Windy, and my hubby will be singing it all day, maybe days.

More often than not when I wake in the night, the instant I wake, the earworm sings. I had Neil Diamonds
"Cracklin' Rose" in my head day and night for about a week and then one day we were in the post office waiting in line and over the radio I heard "Cracklin'Rose you make me smile..." my hubby turned to me and said "Oh No... you're done for".

I have even subconciously put together medleys that no one would attempt and they play in my head all night. I don't mind it enough to take medicine for it though.

Oh and Lady Gaga is going to take over the world with her earworms!
;0)

Thank you DJan...!
and thank you Jo for not naming that particular ear worm...

Oh honey I hope it is not me bringing you the ear worms. I have wondered sometimes if I should stop with my music.
When I first started reading your post I did not know where this was going. lol Never knew the name for the problem.
Take care
Love
Maggie

You make everything seem so interesting, Jo. Even this phenom.

I visit most blogs with my speakers turned off. I find music on a blog highly irritating. I know some like it, but i'm fussy about noise, & usually do NOT have music playing when i'm reading.

I do get earworms, but usually something that i've thought of (although i cause a few, too, if i'm mentioning a song!) I just prefer to choose my own music, thank you. I appreciate that most bloggers don't have music any more.

I never knew the name for them, but I get them all the time. I'll spare you the title of the one that's been stuck in my head since Saturday.

Best antidote for that is to mute the sound before you visit the site! I've never heard the term - blogs are such a helpful source of new information! Thanks, Jo.

Oh my goodness, can I relate. Last week on The Daily Show one of the guests was Johnny Knoxville, who stars in a series of movies I've never seen called Jackass (and that answers why I've never seen them, I suppose).

Arrrgh, and hee! It's actually sort of a cute song, it just isn't one I want playing nonstop in my head.

What do you suppose it is? The repetitious quality of the melody or lyrics, or both? Reminds me of Groundhog's Day wherein Bill Murray starts murdering his alarm clock every day as it spits out "Babe, I got you Babe" over and over, for nearly an eternity.

You got my attention with the term ear worm. Another nagging occurrence for me occasionally is the creaking crickets in my head.

Have a great day sweetie!!!

This explains why my students would rather rap instead of learning their multiplication table: Ear worms.

I get earworms quite often. Kids songs tend to really do it to me. I never knew what to call them and I think calling them earworms ids delightful. Delightful post
Johnina :^A

I share an office with a co-workers and the other morning she was humming a song. It was stuck in my head all day long.

Oh, yes, ear worms. We get them frequently at our house as both our young adult children are musicians, and long after the practicing stops the music just keeps on giving! LOL! :)

Josie: I have had remnants of a song playing over and over since Mama got so sick this last month. She used to play a song on the piano and we would sing it together--something like "We Have the Right to Love Again." It was from a Tyronne Power movie. That's about all I can remember. Do you know the song? D

I am familiar with the phenomenon but didn't know the term "ear worm." Frankly, I wish people would not set their blogs to blast music the second you click on them - it always takes me by surprise and since my husband is ill and naps a lot, I have to scramble to click out of the offending blog before I've had a chance to read it.