When I was a little girl, I had a brother who was very interested in astronomy. He read all kinds of books on the subject and then would tell me about what he had read. We would go outdoors and he would point out various constellations in the night sky. He would explain to me that some of the stars were so far away, by the time the light reached us and we were looking at them, they possibly did not exist anymore. We were looking at their ghosts. My brother also believed there was life on other planets, perhaps even in our very own Milky Way Galaxy in which our solar system is located. The thought of intelligent life on other planets fascinated him, and to this day he still believes they may even have visited us at some time. He said one of the earliest recorded accounts of this was in the Bible where, Elijah had apparently been taken up to Heaven in a “Chariot of Fire”, and there were eye witnesses to this. 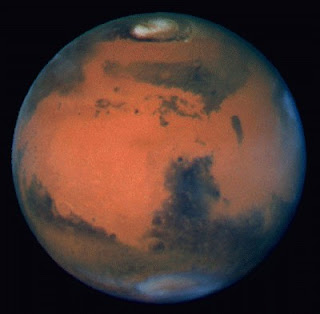 I was as skeptical then as I am now, so as far as I am concerned, the jury is still out about whether we have been visited by life from other planets. I do believe, however, that in the very near future we will set foot on at least one other planet in our solar system. I believe we will colonize Mars, and there will be children of the human race born on Mars. They will not be of Earth, but indeed will be Martians. They will call Mars home, and Earth will be a distant planet. Did Mars cultivate life at another point in time? Perhaps. Was it intelligent life? Why not? No one knows for sure. There is some indication there was water on Mars at one time, and all the components for life. Perhaps they started out as microbes, much as we did, but the harsh environment could not sustain them.

The human race is still in its infancy, and yet in our baby steps, 12 men have already walked on the moon -- the earth's nearest satellite. That is phenomenal when you think that the Industrial Revolution began with the first steam engine less than 300 years ago. Where will we be 100 years from now? Will one of your descendants be the first Martian?

And still I'm not convinced. Ah well, a luddite I am. And a happy ignoramus.

Celine, famous writer (aka Dr. Destouches; got his MD through night school):

Everything is phoney. The universe is phoney. Everything happened so long ago, that all we're seeing is the past... And he could have added that we hardly know how to handle the present. What will we tell the Martians?
Priestly class always points to the sky. "See? There is Venus at about the edge of the Milky Way Galaxy. Therefore we should rule, no?"
Ah time and chance.

I love to speculate. I imagine explorers starting colonies somewhere in space the way the English came to Jamestown.

Did you know that SpaceShipOne has already been designed for commercial space tourism?

I just reviewed a book called "The Hunt For Planet X" by Govert Schilling. You might like it.

What a great brother you have. It never occurred to me that the "Chariot of Fire" in the bible could have been talking about a UFO. At this point in my life I have known several credible people first-hand who have either seen UFOs or alien life forms. It's very hard for me not to believe there is other intelligent life in the universe.

It's definitely something to consider and I think I'd be willing to go into space - if invited. lol

I saw a documentary once that showed pictographs the Egyptians had made of "automobiles" they couldn't possibly have known about at that time ie. helicopters. It was interesting, to say the least. I am not convinced one way or the other that there are 'others' but wouldn't that be a hoot?

I have always believed the quote "there are as many planets as there are grains of sand, it is arrogant to pick up a single grain and say life can only exist here". So I believe there are planets with other life forms - recognizable by us or not - but am still not sure if we've been visited by anyone else.

Do you suppose they will write prose detailing skies of red instead of blue? Hmmm...lots to think about. I may have to go ponder awhile and get back to you.

One doesn't have to be religious to believe that we humans are not to decide on which planet to live. If we do decide, we violate the rules of Creation. Even on Earth, moving to another continent other than the one of our forefathers, for permanent residence, is against the rules of Creation, and brings with it lots of trouble.

What a great story. Perhaps you could share it as a Volunteer Grandma?

The First Martians or 100 years from now, will probably look for their origin and history in virtual world and find out that one famous blogger wrote ".........." about Mars and Martians. They will perhaps also research about what her friends commented on her blog about Life on Mars. he he.
I love your blog Jo. great read on a late sunday morning.

Hm,I would love this to be true and I have seen loads of documentaries stating possibilities of life or intelligent life on other planets.I love to daydream about this,how similar or different would they be.Do they have a macdonalds up there,do they watch movie,do they need to breathe?lol I really sound silly,but its so THRILLING!Great post!!

Interesting topic...I do not know what to believe, but then again after watching Men in Black II at the end when they kick open the emergency exit door and it turns out that we are just a locker in a terminal of various species within another galaxy, it makes you wonder????

Have you seen the movie Martian Child" (2007)? We watched the DVD this weekend - so funny - I think you'll like it.

Oh, I hope so. I had a dream last night about going to the moon and collecing rare species. You always seem to have a telepathic sense of what posts to write and when. Well done.

I think there must be life beyond Earth. Tons of it. It may be so different from us that we wouldn't even recognize it as life. Our definition is so narrow. Ants might be wondering the same thing when I run over a nest with the lawnmower making them think that God had just struck.

What a sweet remembrance!

Again, earth is but a miniscule speck in the solar system. There are likely thousands maybe millions of planets out there we know nothing about. There is, therefore no reason whatsoever to think this planet is the only one capable of sustaining life. That would be the height of arrogance.The life forms on other planets may be quite different and incomprehensible for us, but that doesn't mean they don't exist.

The late and great astronomer, Carl Sagan gave us a reason to believe in the infinite possibilities of the existence of life beyond our own. I just wish I could be around the next couple of centuries to see how it all plays out.

I mentioned earlier on my angels blog that when I was doing research for my grad school thesis on angels as archetypal images, one of the most intriguing theories I came across is that angels were in fact aliens. Halos, flaming chariots, flight. Attached to this theory was the idea that humans evolved from the interbreeding of these angel/aliens with Neanderthals, which, one has to admit, would explain many things.

I loved Ray Bradbury's stories about Mars and it's settlement. He even had a story called the First martians, or something close to that.

Ivan, we will be the first Martians. Maybe we are alone here.

Ruth, that book sounds wonderful. I am always looking for something interesting to read. Thank you.

Pouty Lips, oh, gosh, the very thought of seeing an alien life form terrifies me. I have recurring dreams about them. *sigh*

Leslie, yes! And a lady never goes where she is not invited -- right? *heh*

Robin, I am not sure we have been visited either, but I do think we are on the cusp of visiting other planets.

Kathy, prose about skies of red? Well, yes, I believe they would. They would think their home is as beautiful as we do ours.

DUTA, that is a very interesting thought. It does indeed seem to bring trouble at times, doesn't it?

LovelyPrism, LOL! Yes, I have a lot to share. I have begun the enquiries too.

Introspection, too funny! Oh, goodness. I will be considered a prophet. *heh*

MissNobody, I think probably one of the first things they will set up will be a McDonald's *sigh* And then they will set up a sports arent and name it after a car company or an office supply company. :-)

Kym, I haven't seen Men in Black II. Now you have piqued my curiousity. I'm going to rent it! Thanks!

Jeanette, "Martian Child"? I had not even heard of it. Now I'm going to look for it. Thank you!

Greenpanda, going to the moon and collecting rare species? Goodness! I sometimes wonder if we have introduced life to the moon, after landing there and taking our microbes with us.

Butler and Bagman, I have heard that Buddhists bless the soles of their feet, in case they step on ants and other insects and kill them. Interesting thought!

XUP, well, the possibility of life on other planets is huge, but we will definitely be the first Martians.

Paula, my father was a great fan of Carl Sagan and read all his books. I have read some too, and I agree 100% with everyone he posits. One day mankind will discover the truth of the universe.

Maureen, I know people who really believe that theory. It is something to think about -- and anything could be possible, couldn't it?

What a wonderful & thought provoking post!! I so enjoyed this.... now I'm off to ponder about Martians!

We are the descendants of the sandwiches the Martians left here after a visit here aeons ago. The sandwiches evolved.
I am the Earl of Sandwich and you are Lady Sandwich.

Perhaps we are the descendants of a race from beyond that happened to end up here! Hey, it could happen. D

I've never encountered a true
"martian", however I do work and live among many that are clearly from other planets.

O. Joy, yes, interesting, isn't it? We will be the first Martians.

Ivan, *chuckle* I believe you may be right!

Donnetta, of course it could happen, and many people believe it has happened!

Kimberly, they must be relatives of the same people I work with. *heh* *sigh*

if there are martians whizzing around the solar system looking for intelligent beings they''ll probably skip right by us...heehee, jc

At some future time - some hundreds of thousands of years from now - our sun's dangerous radiation zone will have grown so much that most of our beautiful earth will become a desert. Human beings will need to travel to Mars and make it inhabitable somehow if the human race is to survive.