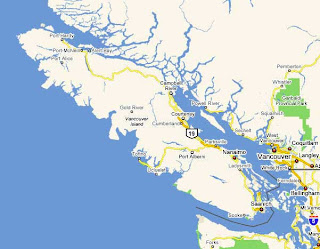 Travel + Leisure Magazine and Condé Nast Traveler have voted Vancouver Island the best island to visit anywhere in Canada or the Continental United States. It is North America's largest Pacific island, and has also been voted one of the world's leading island destinations. And it's right at our back door. I was born and raised on Vancouver Island, close to the West Coast, and I spent much of my childhood playing on the beaches on both the West Coast and the East Coast. 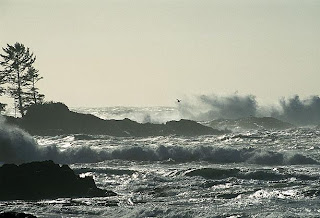 The beaches on the West Coast of Vancouver are wild and open to the Pacific Ocean and people come from all over the world to watch the storms and the magnificent waves breaking on the shore. Most of the area is still undeveloped, except for a few small towns along the Pacific Rim National Park. The town where I grew up is at the head of a fjord, and several years ago there was a huge tidal wave that went from Anchorage Alaska all the way down to Mexico and across the Pacific Ocean to Hawaii. My home town was particularly devastated, and as a result of this a Pacific Tsunami Warning Center was established.

I am thinking of taking a little trip over to the Island this weekend. It's a two hour ferry ride from Vancouver, and it's wonderful to clear the cobwebs away. And in a few weeks I have to do battle in my personal life, and I am a little bit frightened, but sometimes we just have to stare the enemy in the face, don't we?

I haven't decided yet if I will go south to Victoria, or northwest to Long Beach. Hmmmm... what a decision. I'll do a post tomorrow about southern Vancouver Island, and maybe you can make the decision for me.

Sounds so good, Jo. I've always wanted to go to Victoria on vacation. I have a friend that goes often and loves it! You'll have to take lots of pictures...you can help me decide which vacation will be the best!
Clearing cobwebs is always a good thing :)
Have A Happy Day!

be spontaneous...do what your heart sings..

My husband is from the Maritimes and he really misses the ocean now that he lives in Ontario. We are going there for about a week on business and he is really looking forward to eating at his favourite "down home" restaurants and sitting by the beach watching the water and listening to the sound of the waves breaking. He loves a good storm at the beach!

Have fun and enjoy yourself. I'll be sending good thoughts your way

Nice post! Keep up the great work!!
Would you like a Link Exchange with my blog COMMON CENTS where we blog about issues the affect us all...
http://www.commoncts.blogspot.com

Have a good time wherever you go. Good luck with the personal enemy.

Stand outside on the ferry and let the wind blow through your hair! That should help to blow some of the cobwebs away. I'm still hoping to go over to the Island in the summer with a friend.

flip a coin, doesn't sound like you can go wrong either way....enjoy. take care of yourself, jack

I don't think it's so much about where you're going geographically. Wherever you end up, I hope you find your balance.

Take some pictures and remember when we stare down that enemy that we think is larger than life, we come to find out otherwise! Have a safe trip and do not forget to upload the ferry ride shots!

Sounds like fun we all need to clear the cobwebs every now and then or it seems the worms eat at our brain, can't wait to hear about the fun you have

Sounds like a wonderful weekend. Enjoy. Put your armor on for the battle. D

Have a great weekend !

Love that area! Vancouver Island is spectacular. Victoria remains one of my most favorite places - I would love to live there - in those condos on the harbor, where you can walk to town.

Anyway, make the best of your weekend and "charge the batteries" for the challenges ahead of you.

I was there 10 years ago, and I agree with you entirely.

Godd luck with the looming battle.

Love visiting Islands. Pls shoot lots of pictures specially the ones with water, sky, and suns (rise & set).
Have a wonderful weekend, you will ready to face any thing. Good luck.

Vancouver Island sounds like a superb weekend destination. Something I really need. My boss is on my case all the time and I just can't handle it anymore. Maybe I need to follow your example and break away.

I think whichever area you choose will be wonderful - I agree with jack (jackc50) - flip a coin and forget about decision making - go with the flow. Warm wishes to you, Vxx

I sort of dig Martin Buber too.
I once went on a odyssey and wrote a book about it. An editor, reading the novel, asked, "What was the purpose of the odyssey?

Jo, Do you know what's up with Iowa Grasslands? I miss Russell and wondering if you can tell me if he's okay. I enjoy your blog, which I found through Russell.

Lovely.. sounds exciting!! I havent been to canada as yet!

What happened to Russel?

The beaches of thwe west coast. Raw nature and unparalleled beauty packaged together. It reminds me of a scene from Key Largo.