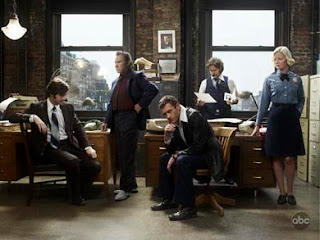 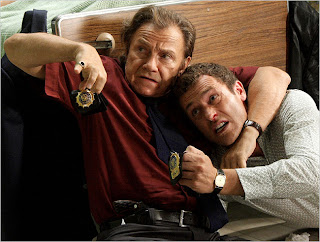 "Life On Mars" was a dark comedy about a police detective who gets hit by a car in 2008 and wakes up in 1973. Anyone who actually lived in 1973 would love the references to pop culture of the day, all of it with tongue in cheek. The soundtrack was so ... well ... 1973, and check out Harvey Keitel's white shoes.

Who couldn't love "Life On Mars"? Well, obviously the folks who run the programming at ABC didn't love it. They didn't even give it a chance.

In last night's episode, Sam infiltrates a "swingers club" under the psueodnym "Tom Cruise". He introduces two other police officers as "George and Laura Bush".

It's a great show and I'm going to miss them all, including Sam and "the Lute" and all the rest of them. Just don't ask me to watch "Dancing With The Stars".
Posted by Jo at 5:21 PM

I never saw the version you watched, but have watched the English series.
Such fun, to remember all the old stuff from back in the day.

No, they need to quit doing that...I started watching that and missed it the other night when it was on. I usually do not watch much television unless I am super bored, but that show took me back to when I was a kid!

Oh No!! I really liked that show, I grew up in the 70's, everytime a show I like comes on it gets canceled and we are left with junk

I never watched that show so I guess I'm really going to miss out now...boo-hoo.

Ah...1973 - the year I was married (the first time! lol) That show really took me back and I'm so disappointed it's cancelled!

I have never seen this show but now I want to! I wonder if I can rent past episodes. . .I love off beat television.

Just to show how far behind things we are over here. Although its been cancelled there, we haven't even seen ot over here. We are always two or three years behind on series like that.

I never watched this show,but it s*cks that they cancelled it.Hope they put good on for you to watch instead.

Hi Jo,
Thanks for stopping by my blog. You should try and get hold of the British version of Life on Mars, it only ran for two seasons, but it was brilliant. In Britian they have made a one off follow up set in the 80s called Ashes to Ashes, I've not seen that yet but looking forward to it.
Just been watching the American version, not sure which I prefer, maybe the English but just because I saw it first. They are both great. Hope the Americans do the follow as well.

Oh ABC are idiots. Like meggie, I saw the English version, and it was brill. Sorry, Jo.

Love, love Harvey Keitel, but have never seen this serial. Why is it the good stuff never lasts?

No! No! NO! I can't believe thay cancelled the one good show! I watched the English series and loved it. I was so excited that We'd get a US version. These people are nuts!

Hi there Jo!
Just found your blog via the link you made by becoming my first ‘unknown’ follower. First off, I’ll apologise for the cussing here and there in my blog, and hope it doesn’t put you off sticking with reading it, but I do cussa fair bit generally, and pretty much write it as I am. Quickly browsing your recent entries, I saw the one that said a critical comment took the wind out of your sails a bit.

I know exactly what you mean by writing with people you know who may be reading it in mind. I sent the link to my blog to pretty much all my friends when I first started it, and in the ‘rush’ of First blog euphoria! I’ve regretted doing that really, as I wince here and there thinking of the reaction of a few out there reading it, but in actual fact hardly any seem to be doing so, which is no bad thing. Most aren’t ‘into’ computers, or the browsing ‘net much. I’ve started a new anonymous blog in WordPress, which seems a lot harder to use, but I might use it to really let rip, and reveal how the ‘mild’ depression I suffer from is affecting me.

Re. censuring, and editing, writing……….. many have said I write well, and come out with some good thoughts, but to be honest, I’ve never been able to understand how it is so hard for some people to do just that. I just write as I think, and talk, and apart from an (essential!!!) spell-check, and the odd tweak, pretty much don’t read it through much. Mind you, when I DO read it the next day or so, I quite often add to it (on the blog), and correct it…….. mostly to get it ‘reading’ better than to alter it’s content much.

Political Correctness, and Bullshit, flashes me up in milliseconds, and sometimes what I write is something of an antidote to it all. At work I am surrounded with it at times, and it pretty much always has the result of me behaving badly. If I can upset a weenie, in my book it goes some small way to the huge upset it has caused me in my life.

You say you’re not a ‘write’, but you do write very well. Good blog. Thanks for showing some interest I my ramblings, and have a pat on the back from me. Ignore the pathetic weenies who criticise. Be yourself, hunny, and to hell with the rest of them.

The British Life On Mars was good……….. I loved it for a window into a (relatively) simpler time long gone now. :o)
Kevin.x

Yup. Thought Eli Stone was brilliant as well and they canceled that mid second season with no resolution of any kind. Every time I become attached to a show on ABC they cancel it. I've given up on ABC. They may as well call themselves Fox2 and where dunce caps.

I never watched it. I don't like cop shows, and I didn't live in the 70s so that would have been lost on me. I was surprised when it came out, however, at how talented the cast was.

I thought the same of ABC when they cancelled Pushing Daisies. Such a cute and well-written show!

And now we're got housewives kissing each other on Desperate Housewives. Talk about jumping the shark.

(not saying women kissing women is bad, what's bad is that they would put it on a show like DH just for sensationalism)

Like Lorna, I too have never heard of the show, but it sounds interesting. Too bad I won't get the chance to see it. I'm hooked on 24 and The Sarah Conor Chronicals this season. No Dancing with the Stars or American Idol for us!

If you like the USA verison you should DEFINTALEY check out the UK version of life on mars, it's fantastic I'm a huuuge geek for it!!! I hope the US version get's played over here in the ol' UK that would be cool... I love your blog btw peace out xx

Honestly, I think I've been on Mars - I never heard of the show. From your description it sounds like it was a fine program. Sorry I missed it.

Life on Mars is truly one of the best shows on TV right now and I had no idea it was going to be cancelled. Maybe if there's enough public outcry they will change their minds?
I've never seen this episode and I've watched them all. Maybe it will be on next week here!

UGH! I feel exactly the same way - my husband and I love this show... growing up in the 70's we roar at the references.

That's my favorite show!!!!
I'm crushed. Well thank you for breaking the news to me in such a tongue in cheek humorous nature.
I'm really going to miss those white shoes.