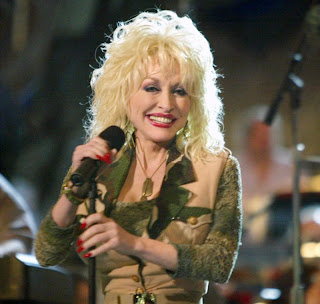 I love Dolly Parton. She has lived her life the way she wants to live it, she's not afraid to be who she is, and she makes no apologies. One of my favorite Dolly Parton quotes is “Find out who you are and do it on purpose.” That is a lesson we could all learn -- early in our lives.

Dolly was interviewed on Larry King Live the other night, and she said that during her lifetime, since she was age seven, she has written 3,000 songs. Many of them have been recorded by other artists, so often we don't know the song has been written by Dolly Parton. “I Will Always Love You” made famous by Whitney Houston, is one of them. Dolly recorded the song as well, and her version is different from Whitney's, and quite sweet.

Dolly is an amazing person, and I think she is what most people would refer to -- in a complimentary way -- as a great broad. She never takes herself seriously, but just has fun with life. How can you not love someone who said, “I was the first woman to burn my bra - it took the fire department four days to put it out.” But she has way more going for her than the teeth-gritting, feminist “women of a certain age”, who over the past few decades have made everything so deadly-serious. I wish they could all take a page from Dolly's playbook, and lighten up.

“When I'm inspired, I get excited because I can't wait to see what I'll come up with next.” ... Dolly Parton.

Here is one of my favorite Dolly Parton songs, written -- believe it or not -- by the Bee Gees. I hope everyone finds their Islands in the Stream...

She not only sings well, she also dresses well. I like her black dress, especially the transparent bust cover. It looks more sexy than if it weren't covered at all.

it is a dolly world, as seen in the movie 9 to 5. she could be, as her boss see her[dabney coleman] but she is so much more. on her terms. not always easy to do but you feel better in the morning, jc

The thing about Dolly Parton is that she is so unaffected, so natural, so herself, that she is underestimated in some quarters. Then you listen to her singing and you realize the power and artistry of her interpretation.

Thanks for the reminder of a very good entertainer and talent. And especially of a really nice gal.

My favorite "Dollyism" is to go ahead and have dessert, if you want to, but you just don't have to eat a big dinner before it! True wisdom.

Love her too Jo. Always have since I was just a little girl living in Virginia. I was so plain, and she so glamorous. I never got glam like her, but I still think she is beaustiful and talented. My favorite quote from Dolly, "If I see it saggin, draggin, or waggin, I get it nipped, tucked, er sucked!" :")

Gee I'm sorry I missed that Larry King interview. I've always liked and admired Dolly Parton, too, particularly because of what you mention - she is just herself!

I love Dolly too, I've read her book, she has lived quite a life, and is so down to earth, thanks for sharing your thoughts

I grew up listening to Country Music. My father is an old fashion cowboy wanna-be. Dolly Parton is one of his favorites as well. I personally loved 9 to 5. (The movie was hilarious) I also loved I Will Always Love You. Her version was much better than Whitneys'. She is a wonderful woman, I wish I had her drive and lust for life!!

I just found you on the internet. You and Dolly both are delightful!

I just love Dolly. I'm hoping that some day she'll connect with Alison Krauss and do a brilliant duo.

By the way, I noticed you live in Iowa. I grew up and spent many happy years in Waterloo!

Jo, thanks for sharing that, it's always good to be reminded not to take ourselves to seriously. She is quite a woman.
Smiles

I think she's one of the sweetest characters out there. She has a lovely sense of humour and I totally agree that her own version of I Will Always Love You is far more lovely than Houston's song. BUT I'm sick over what plastic surgery has done to her face. That lovely woman looks like like a clown with all those reconstructions. I wish she had let her true beauty matter more.

Dolly rocks! I love how she says "If it sags, bags or drags. . .I will have it sucked, nipped and tucked." LOL! Also her voice has not changed since the beginning!

Dolly is probably my mom's favorite musician. I always kind of liked her myself. An amazing woman.

Dolly is brilliant at everything she does and that laugh is contagious. I think many people underestimate her. And the woman's got a set of pipes!

It's always great to see confident people that just are who they are and make no apologies. I love that! Dolly is such a sweetheart :)
Have a Great Day, Jo!

Aww I love Dolly too. My Brother and his family live down in TN near Dollywood, they go there A LOT!!! It's super cool and I can't wait to get down there myself!

BTW, Congratulations....you have a great following now. Your followers are more than 600.
great going Jo.

I like Dolly!!
but I will stick with Timbaland :)

I like her style,gee I dint know I will always love you was by her...I LOVE that song

A Woman Of No Importance said...

I adore Dolly, and her own I Will Always Love You is just so gentle and sweet sung by her - I far prefer it to the Whitney version - She is such a shrewd business woman, and always comes over as very, very sweet and genuine, even under all the plastic she openly acknowledges she has had done:

"I always say if I, you know, if I see something sagging, dragging or bagging, I'm going to go have it stuffed, tucked or plucked."

I think Dolly is one of the greats - she has such a positive attitude to everything. And her singing is such a pleasure to listen to. Warm wishes, Vxx

i see a DOLLY in you too Jo, and here Lorna is a funny granny too... XD

I agree, Jo - Dolly is the greatest. She's an incredible singer, but also a smart, funny, sassy and kind person. They don't come any better. Her version of that song is head and shoulders above Whitney's in my humble opinion.

Dolly Parton is the real deal - a marvelous entertainer and a delightful human being. She always makes me smile.

i love dolly too...i love how she is just herself...she knows what people think of her, she is fine with that, even jokes about it, and she doesn't let that stop her...she is my inspiration...we need more inspiring women like her (: