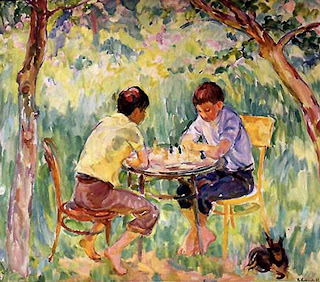 I often think that, when God created me, he made me out of all the spare parts that were left over. When I was a very small child I developed a strange condition with the very exotic name "separation anxiety disorder". It is something I have learned to live with, but it never really goes away. Actually, it was actively fostered in me by my two older brothers. When our parents went out for a social evening with their friends, my two older brothers were charged with my care. Little did our parents know that, as soon as they left the house, chaos reigned. My older brothers' greatest delight in all the world was tormenting their little sister, and they could come up with ways to do this that would have made Vincent Price look like Little Bo Peep.

One of their favorite tricks was to put on an old record of my father's called "Ghost Riders in the Sky" by Vaughan Monroe. Then those two sweet brothers of mine would lock themselves in the bathroom, giggling, and the record would play over ... and over ... and over ... and I would sit on the chesterfield, frozen in fear, visions of ghostly horses and their riders flying around the living room.

When my brothers got bored with that game, another of their favorites was to play "What if...?"

"What if gravity disappeared and we all floated out to space?" "What if the oceans suddenly rose, and we all drowned?"

This last one terrified me more than anything. My blood would turn to ice at the thought of my parents, mangled in a car wreck somewhere, never coming home again. The very thought of it was enough to put me into a catatonic state for the rest of the evening. By this point, of course, my wretched brothers were full of glee, and off to the kitchen table for a rousing game of Checkers or Monopoly.

My brothers and I all laugh about it now, and they have now grown into mature, responsible men. They feel very bad about teasing their little sister this way, and they have no idea of some of the lasting effects it has had.

And just listening to this song still scares the tar out of me.

Nobody's truly perfect, and what exactly is normal anyways. Your last posts seem a bit depressing. I'm sure you're a wonderful woman with interesting quirks. Perfection would be boring. Normal would probably be boring, too. At least that's how I feel.

Cassandra -- depressing? Um, well, I don't mean to be depressing. I guess I am feeling a bit sad. Sometimes I'm happy and sometimes I'm sad. Sugar and salt? Maybe I will post about my new bicycle. That's happy. :-)

you can't go through life worrying about being different and thinking everyone else is normal.. we are all a little strange, all from the same boat so to speak.enjoy the odd moments, embrace them...jack c

Jo...I am sorry to hear what your brothers did to you. I have to say though that there is no such thing as normal in anyone...everyone carries something that effects how they view the world or handle life in general. Please stop beating yourself up, listen to what you wrote and use it to guide yourself through whatever it is that is causing you to feel this way. I do not mean to pry to tell you what to do....I just understand what you are feeling!

I don't think I have ever met a "normal" person, and I hope I never do. Imagine if everyone around us was normal? Now, that would be a true nightmare.

I was never tormented by "Ghost Riders in the Sky" (at least that I am aware of) but I do tend imagine horrible fates befalling those I know and love when they are delayed or even when they aren't. I can't help it. It's just how I am. Maybe it's because I want to prepare myself for the worst, just in case. Worry isn't much fun, but it's what makes us human, and I guess I can deal with it because there are so many good things about me.

I know from reading your blog that you should feel good about yourself. I for one am very glad you aren't "normal." Your blog would not be very much fun to read if you were!

Gee, it sounds a lot like my childhood with four older brothers. Although, I've never dealt with the separation anxiety. In fact, I rather like being alone, something that I think came from being crowded out by four boys and their dusty, mangy friends.

My brother's form of torture for me was to make me stand at the end of a large grape arbor that went the length of my backyard and formed a tunnel. One brother would position himself at each end and make me walk through the tunnel which was full of large spider webs (we called them banana spiders--they were black hairy things with a big yellow spot on their backs) and garden snakes (black ones with a yellow stripe), which were all over the floor of the grape arbor. Ugh...I get shivers just thinking about it! I finally got them to stop when I hatched the idea to "get over" my fear of the snakes and grab one as I walked through to throw it at my brother waiting at the end, blocking my exit. I only did it once and they stopped torturing me (at least in that manner). I guess they figured I wasn't sufficiently afraid of the snakes anymore and that took the fun out of it (or they didn't like snakes being thrown at them). Sometimes you have to turn the tables and that will change everything. ;-)

Eek. I use to torment my older sister like that even when my parents were home. I remember I would do something and run, then she would go to mother and plead "catch him and hold him" haha. I was a lot faster then her. Atleast today, we to laugh about it and we still play around like that. We know its in good fun.

How I love this song. I was six years old when my dad played it on the radio while we were traveling to Orlando, FLA.

Between that and Frankie Lane's music (who also recorded this), I just loved it!

I think all brothers are born with this bullying attitude, specially for a younger sister. And if there are 2 of the brothers, then the sister had it. But there's lot of fun too, and they love you all the same.

"Little did our parents know that, as soon as they left the house, chaos reigned"

My parents left to escape the chaos that reigned always. It was in those moments when they were gone that I eventually learned to fight back against the older ones. I suppose I have the opposite disorder because I have no desire to talk to any of them unless absolutely necessary.

Oh, brother, Brothers! Mine is just a little bit younger than I am. He was always following me around and I had to take care of him sometimes. Once, we had a big old argument when we were kids home alone. He chased me around with a butcher knife! hahaha Didn't catch me, though. I have worked with children with separation anxiety and it is difficult for them. Stepping out that door into the unknown is disconcerting no matter how you cut it. D

Wow Jo, I guess you could look back and laugh at what they did to you. It is sort of funny. (Sorry, but it is) I am an only child and never had the pleasure of being teased and tormented by siblings, though I wish I had. I guess that's why a look at my 4 boys and one baby girl, and laugh at the mean things they do to each other. I just hope they won't be too hard on Mary and the other little blessing!

Brothers can be so mischevious. My son baby-sat my daughter and let her watch that movie where the elevator comes crashing to the ground....Needless to say, for years, and I mean years, she wouldn't ride the elevator. I had to make sure all her doctors had offices on the lower floors of buildings....20th floor, nope, on to a new doctor...LOL!

My much-older brother did horrible things to me whenever our parents went out, and I, too, carry lasting scars in my psyche.

I would have liked to have a better relationship with my only sibling.

I understand the seperation anxiety thing. My Dad died in a car accident when I was ten and ever since then I have had to work at not becoming a complete basket case every time someone I love is away from me. You know husband late driving home from semminar in capital city, that kind of thing you start to think the worst. The anxiety is overwhelming.
We can be so insensitive as children, I once took my little brother on a big walk in the bush and told him I was lost you should have seen the panic, I only did that once. How could I have been that insensitive.

Deja vu my dear. With five brothers, two sisters and a middle child, I took a lot of "abuse" myself and it did have a lasting effect on me to this day. I sometimes feel inferior and introverted. Other times, I'm the life of the party. My mother was somewhat the same way. I remember one night we all assembled in the TV room to watch a movie. The name of that particular movie was "Hush Hush Sweet Charlotte". I must have been around 12. I got up to leave the room because I was so frightened. Mother MADE me stay and told me it was just a movie. I had nightmares that night. On another occasion, my mother took us to the drive in. That movie was "The Birds" directed by Alfred Hitchcock. I was petrified I was going to be pecked to death and for a long time I always looked under my bed to make sure there wasn't a dead body there like the old man who was found along side his bed with his eyeballs pecked out. Gruesome stuff. Not only did we suffer from this kind of "unintentional" abuse but it's happening more every day with this generation of bullies. Some recipients suffer the fate of suicidal tendencies and in many cases go through with it. It's a sad sad world. BUT I also have wonderful memories of growing up in a large family. Lots of them. More so than the bad. Your blog was not depressing at all. It was a journey down memory lane that wasn't too pleasant and still isn't. No one knows how situations such as these can affect our adult lives. Your memory may help others remember and perhaps make amends to whomever were recipients of their harshness. Not everyone can be so blatantly honest about their past. You have done well and I salute you. Sorry I rambled on.