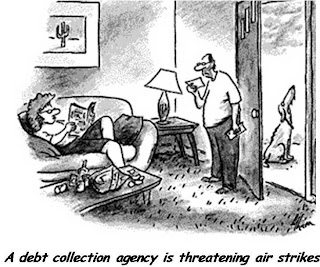 I watched an interesting and informative program on Dateline NBC last night, and I was shocked. The program was about debt collection, and particularly about debt collectors who are using illegal practices to collect money. Lots of money. Apparently in the currect recession, creditors are selling their delinquent accounts to debt collection agencies for pennies on the dollar. These collection agencies then go ahead and use any means they can to collect the full amount of the debt -- and put it in their own pockets. It's a very lucrative business, and they often work out of shabby offices and basement suites, using illegal debt collection practices such as threatening the debtor with jail. They often pose as lawyers or sheriffs, telling the debtors if they "don't pay right away, they will be picked up". 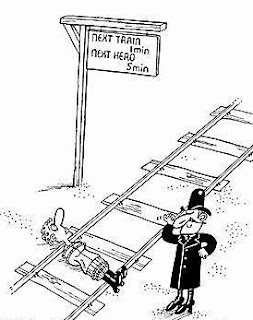 Crooks will always find an opening for a new scam, and it seems that these thugs have turned the recession into a cottage industry. Hard-working, honest people who have gotten over their heads with debt -- for one reason or another -- are being scavanged. There was one couple in the NBC segment, who were convinced the police were on their way to pick them up, and they fled their home. The NBC investigation uncovered the fact that the so-called debt collectors were scam artists, currently out on bail for previous swindles they had committed. In other cases, legitimate collection agencies had hired people who were overstepping their boundaries -- a lot -- in their debt collection practices, and they were ultimately fired.

If you are in debt and are being hounded by debt collectors, you should inform yourself of your legal rights. Debt collectors are not allowed to:

● Make a charge or threat that has nothing to do with the collection of the debt;
● Make abusive calls in which they lose their temper and use profanity or other verbal abuse;
● Talk to your employer without your permission, unless it's to confirm your employment;
● Talk to you, your family or your employer in a way that will humiliate or distress anyone.
● Make frequent calls that constitute harassment. Unless you provide the reason, a collector should never call you more than once a day. Reasonable collection practices should not require that the collector call you more than once a week or every second week in order to determine if your financial situation has changed;
● Give you a document that is made to look like an official court document when it isn't.

In Canada the debt collection practices are governed by the Provinces and Territories, so you can check your Provincial legislation for the guidelines. In America, there is a document here where you can check your legal rights as a debtor. There are also lots of support groups, incuding several on-line.

I was shocked when I watched the program on Dateline NBC. The second part of the program will be aired on Sunday, March 29th at 7:00 p.m. Eastern Time.

Ah heck I missed the first one. I hope they do a repeat, and you are right: They are true villains.

Always a gimmick. And always a crook out there ready to pounce. Simply amazing. D

Disgusting. People amaze and horrify me. This is awful.
I also missed the first one. I'll watch out for the second - or they might not show it where I live. Oh well. :(

I missed seeing the show, but a week or two ago I read an article on another new trend in the collection industry, specifically credit card issuers and how they are now going after the "deceased." Actually, they contact the deceased's living relatives (who were not responsible or even joint tenants on the deceased's account)and attempt to "guilt" the relative into paying up the account. Shameful!

I get no less than 3 phone calls each day from debt collectors - for my ex-husband's debts! This has gone on for years and no matter how often I tell these guys that the creep and I are no longer married (and all his debt was incurred after our divorce), they just keep calling.

Sorry I missed that. I am sure the debt collectors think of themselves as entrepeneurs, just trying to make a living. Shameful and disgusting.

I have only disgust for people who abuse someone elses misery :(

Another subject - I didn't realize the flowers on the left were your paintings until I saw your post about the daisies. Jo, you do great in a soft style - I like the geranium the best!
Ever seen my Celebrity Collection of flower paintings? I posted them in January 09 -Enjoy!

I thought that was going to be on MSNBC and taped the wrong program, darnit! Eventually all the Datelines get repeated on MSNBC, so I will watch for it.

Businesses only turn to these collection agencies after a bill becomes 90-120 days past due. If someone has trouble paying a bill, they can usually call the creditor and make some kind of reasonable payment arrangements. If they choose to ignore their financial responsibilities, then what do they expect?

It's the people who throw their bills away, don't answer their phones, or the phone is disconnected, or they lie and say "wrong number," etc. who get harrassed. They are called deadbeats, and I don't feel sorry for them one bit. These deadbeats have caused some small businesses to eventually close or file bankruptcy!

It is a shame that bill collectors resort to the kind of tactics you mentioned, but I can assure you it is a last resort.

But at the same time, I don't think anyone should ever be harrassed like that. I could never be a bill collecter! I think that is a a profession for heartless people.

Believe it or not, I try to be nice to everyone! I was always taught that you can catch more bees with honey!

I missed that one too, but I will be watching the 2nd. I know someone whose neighbors got calls asking if they had moved - or why they didn't answer the phone when creditors called.

It's amazing how many ways the fat cats can find of ripping people off of their money.

My husband and I watched that show and were horrified.