Birth Of A Universe 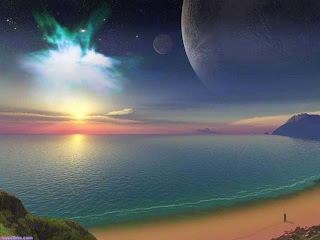 Wouldn’t it be wonderful if we could look far into the Universe and even back into time to the very beginning of the Universe. Observations suggest that the Universe as we know it began around 13.7 billion years ago. It is something that has always fascinated me, because even though we look at the Universe as being “out there” we are an integral part of it. It is all around us, and in fact, it is us -- we are it. The very matter that makes our corpus is the same matter that was present at the very beginning of time. The number of atoms in the Universe is a relatively finite number. According to Albert Einstein, matter and energy are the same, and under certain circumstances they can be made to interchange (this happens in nuclear reactions that take place in nuclear bombs and at the center of the Sun). So, it is probably more accurate to say that the total energy of the Universe is constant, it doesn't change. Isn’t that an amazing thought? When you think about it, that is our immortality. 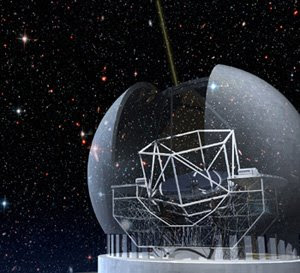 There is a company here in the Lower Mainland, Dynamic Structures of Coquitlam, B.C., that, together with the California Institute of Technology is currently making the largest telescope ever made. Called the Thirty Meter Telescope, its sensitivity will be close to 100 times that of existing telescopes. Scientists hope to be able to use the telescope to probe dark energy and dark matter, the formation and evolution of galaxies, and black holes and the origins of stars and planets. The telescope will be about the size of Vancouver's Science World, the mirror will be the size of a football field, and will be housed in a building about as long and wide as Vancouver's GM Place arena, but 22 storeys tall.

The giant telescope is expected to go on line in 2015, and will cost an estimated $990 million.

Imagine being able to stand on our little blue planet and peer into the past, to the very formation of the Universe itself.

"And, while with silent, lifting mind, I trod
The high untrespassed sanctity of space,
Put out my hand, and touched the face of God!” ... John Magee, age 19
Posted by Jo at 1:03 AM

To look back and see the beginning of light, the thunderous explosion that set all we know in motion, would be a fine thing indeed...but looking back past that point in space and peer into the darkness that preceded it would be grander still.

It's a great picture...Beautiful Universe, Cosmos....

Fascinating. I'll be thinking about it all day.

I agree with Carl and he used the word I was going to use - fascinating! But it is.

I heard an interview yesterday concerning some of the men who have actually been to the moon. Buzz Aldrin said that when he flew to the moon on Apollo 11, the sight of Earth - that blue marble looking sphere - was the most fascinating sight he has ever seen yet to this day.

this is a really good read!
you know, if we were back to when we were first made, we would have more respect for the things that we have, and not take anything for granted!

This is amazing! And I've always loved the poem by John Magee - so poignant... Warm wishes, Vxx

I have always been astonished at how beautiful our earth looks from space. My husband and I enjoy watching the series From The Earth To The Moon, with Tom Hanks as the host. What a wonderful memory to have seen Earth with your own eyes from space itself.

I look forward to seeing just what that telescope can do. Another hope for the future!

$990 million eh? I wonder how many people that could feed?

May have been a huge black hole.

Speaking of black holes, this Frenchman I came across in Ontario said, "I heard you say 'black hole.'--I knew right away you were talkin' 'bout Thunder Bay."

Jo, that was the most amazing post! Beautifully written and thought provoking.

what will they find? it boggles the mind to think about the beginnings of our planet. what kind of picture will be produced? way too coooool, jack c

Exciting post Jo! I am so enamored with science and the creation of this life as we know it. Perhaps, that is why I am a big Star Trek fan - it has always been a portal to the future, and all the mysteries that have yet to be answered by us mortals. Oh, to be able to see it all come to pass, and the questions of creation answered! A lovely promise for the future.

Hi Jo. Really neat post. I love the picture too!
Have a Wonderful Weekend!

Jo- wow, we have been having the same thoughts and posting similarly!
~Lorna

that top painting is incredible.

Hi Jo, just dropped by to pass on an award:
http://thegenteelarsenal.blogspot.com/2009/04/award.html
You write the most wonderful blog!

Have you ever heard that poem sung by John Denver? Magic...

the walking man said just what I was thinking... except, how would one know one was at the beginning? Where does the beginning begin?

I'm with Pauline, and I guess, Mark.

What if the universe is not teleological, that is to say not one thing following another?
What if here is all there is?

Like WTF are we doing on this cooling bit of rock anyway? LOL.

Oh,and Jo Congratulations on your award from Bookpusher :)