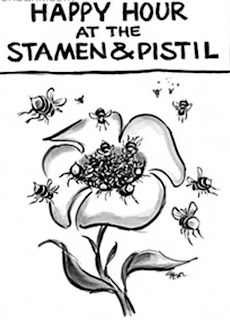 There's always something ... isn't there? Saturday night I kept being woken up by a loud buzzing sound in my bedroom. Something very large was dive-bombing me, but I couldn't find anything. Finally at 6:00 in the morning, I felt something walking casually across my chest. I jumped out of bed and there was a large wasp, sitting on my duvet, staring at me. This thing was huge and very aggressive. I have never seen a wasp that big. I swatted it with a nearby magazine, only to attract two of its even larger cousins. Where on earth were they coming from? I managed to dispatch the other two wasps out the bedroom window without killing them. I don't like to kill a living creature if I don't have to do it. 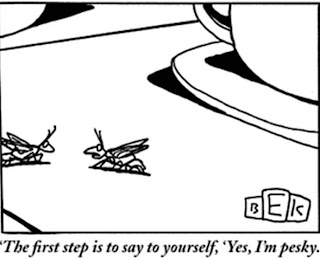 Later that morning, as I was sitting in my big cozy chair having my morning coffee, I noticed dozens -- hundreds -- of wasps outside the sliding glass door on my treehouse. They seemed to be flying into and out of one particular spot. I checked it out, and sure enough, there were two holes in the window cladding, and from there they were making their way into the exterior wall of the building. Everyone was there -- all their aunts, uncles, cousins, mothers, fathers, all their friends -- the whole gang. They were having a grand time flying back and forth, back and forth. I watched about six of them in a row squeeze themselves into the little holes in the cladding.

So now it begins. I have contacted the head of the Strata Council and informed her of the problem. Since the exterior walls of the building are considered to be "common property" it is up to the council to deal with the problem. In any case, I am not going to do battle with a bunch of angry wasps. I will leave that to the professionals. I imagine they will form a committee -- with the wasps -- to decide what to do. Is it really necessary to remove them? How shall they do it? They will hire a consultant, and to be fair, a representative of the wasp colony will attend. Someone will take minutes. The wasps will insist that, since they are living in the common property, they have a right to be there. The strata council will concur, especially since eradicating the wasps would cost money. Someone will suggest we should all agree to live together peacefully. The wasps will continue to have parties in my bedroom in the middle of the night.

Wasps are MEAN. I wouldn't go near them, if I were you, and I'd try to find exactly how they're getting inside your place and plug it.

There was a wasp nest in our backyard when I was little, and my dad was stung nine times trying to kill them despite the fact that he had on jeans, two flannel shirts and two undershirts, a ski mask and net on his head, leather gloves and boots, and had tied down his pant legs, collar, and sleeves with rubber bands. (Yes, he looked really silly)

There's no negotiating or mercy from me for those things.

Orange Guard around the windows and cracks should deter them. They don't like it. It'd be best to do it at night when they SHOULD be sleeping. Apparently they're not.

wasps are ornery creatures and you should not be sharing living space with them. i know you and alot of your readers try to be gentle and not kill things but......sometimes you have to. rule of the jungle. good luck , jack

This calls for WAR!

You may want to hurry that meeting up! You know you should make sure they can't get in...even tho they do eat nasty spiders..they are not your friends. Nests can have thousands of defensive females that would go on the attack if provoked! I have had numerous nests and have been stung over and over again..many times without my provocation, they like how I smell..I swear.

I'm the same...I don't like to kill anything. I try to make a deal. Stay out of my way and you can go on about your life. Get in my bed, and all is fair.

Once as I left my apartment, I noticed my cat was climbing the screen inside the sliding doors. I walked over and pounded the glass to scare her off. Well, there was a wasp nest on the door. Just like you see in cartoons, this black swarm dive bombed me...with several going down the back of my dress. Very distressing.

I do not envy your predicament. I'd rather not kill wasps either, but when faced with the choice of smooshing the buggers or being stung in my sleep....well I'll take smooshing.

Sorry, even the squirrel mafia can't help you against wasps. They're scary.

Oh, no, not the committee...LOL
I wish you much luck! I hear the bugs in Canada are huge...LOL

Thanks for the lovely comments at my blog today. I really appreciated them :)

No doubt about it, I'd be rushing to the hardware store to buy some wasp killer and when they are asleep, all cozy in their little jammies....WHAP! They'll be hit with a blast of toxic chemicals that will kill them instantly. Needless to say, I have no qualms about killing something that is equipped with a large stinger.

This made me giggle. (The meeting part, not the bugs in your room at night part - terrifying!)

Good luck with the problem! I once had an ant infestation. It ended up taking 4 girls, $50 and all afternoon to get rid of the suckers. And to think, it all started with a leaky bottle of grenadine... yuck.

Wow...what a night visitor to have! When I was younger, I had to get some thing out of the compound next to my dad's shed and as I was in the compound, I kept hearing this buzzing noise and felt little stings on my arm. By the time I got back inside and showed my dad my arm, I apparently had been stung by several wasps...good luck with the meetings and I hope that the negotiations go your way! LOL!

It was funny the way you put it Jo. Perfect to lift the mood. Meanwhile take care and dont let the wasps near :)

We had a swarm of bees in our wall a couple of moths ago which needed removing. Took them a week to get most out as it is brick walls and the hole smaller than your little finger. A funnel and a second nest did the trick. Glad to be rid of them.

so sorry Jo. Get someone to get rid of them for you:)

your description of how the meeting will go made me laugh out loud and of course, you're right. It's always about the money. Get yourself some wasp spray and dispatch the little buggers yourself...

We had a huge wasp problem back in Vermont. I suggest getting some wasp spray at the store. They are not to mess with. They can be very mean and will think nothing of you when it comes to their hive. Don't wait for that hag committee to do something, by then your room will have grown a nest, and believe me, they build those things FAST!

If the committee take as long as it did with the garbage can, you may need a new plan for making them stay on their side of the glass door. :-)

Make sure they call in a real exterminator and not try to do it themselves. I had a wasp invasion in my basement once. It started with one, then three, then seven then several hundred .. just over the course of one day. I was told at the time that it's too dangerous to try to smoke them out on your own because they become vicious. You need to be away from home when it's done.. and for a couple of hours afterward. Keep on them, and good luck.

Oh gosh, your post was like a bit of a nightmarish scenario. I do hope your Strata Council can help. Like you, I can't bring myself to kill anything - unless of course it goes on attack mode towards me. I wonder if there is a humane way to deal with this situation? I suppose not, so, may you be free of the pests in short order!