How Could They Forget Queen Latifah...? 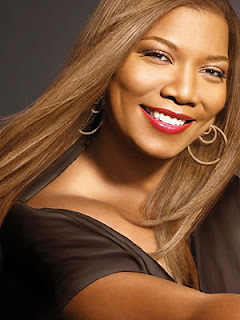 Today on CNN's website, Entertainment Weekly listed the "25 funniest women in Hollywood", and they didn't include Queen Latifah. How could they not include Queen Latifah? She's wonderful, she's funny, she's smart, she's a fabulous singer, she's beautiful, she's talented ... she's funny. When Queen Latifah walks into a room, she owns it. Did anyone ever see her with Steve Martin in "Bringing Down the House"? Queen Latifah stole every scene. A couple of years ago she was in a movie called "Last Holiday", for which she should have won an Oscar. This year at the Academy Awards she sang "I'll Be Seeing You" during the in memoriam segment. She brought down the house. How could they not include Queen Latifah in the list of "Hollywood's 25 funniest women"? There are not many people as wonderfully multi-talented as Queen Latifah, so I think she needs her own category. She's the Queen.

I love Queen Latifah...everything that she has done, she just adds such a warm, strong presence to it! Thanks for posting the video, I love her voice! Happy Easter!

I think she is amazing.

I couldn't agree with you more. On top of all her talent, I think that she is such a beautiful woman - she is comfortable with all her curves. Love it!!

Uh oh, I guess it goes to show, different strokes for different folks. I try never to watch anything with Queen Latiffa in it.

Totally agree with you there Jo

Jo! You are soooo right on. I read that entire article yesterday and half of the people on the list made me stop and ask incredulously, "Why?" Good catch on your nonsense radar.

She is pretty funny. Sometimes the actors/actresses they pick for those "top this and top that" don't make a whole lot of sense to me either. I remember watching her on a sitcom with two or three roommates, but for the life of me, I can't remember the name of the show. She was great even then.

I admire her for her ability to alter her projected (outside)self while staying true to her inner self. She has the signs of a truely beautiful person.. inside and out!
Jo, thanks for stopping by my blog. I have been absent for awhile but plan to come back as I do so enjoy writing. I hope you enjoyed reading some of my past blogs as much as I enjoy reading yours! Happy Easter!

How could they forget her, because they always do. She is completely underrated. I have been a fan since her humble beginnings. I loved her in 'Last Holiday', but that is just one of the many movies she has made that would have you fall down laughing. Thanks for honoring her here! She so deserves it!!!

I really like Queen Latifah, too, but maybe being categorized as one of the 25 funniest women just doesn't fit her. I mean, look at how multi-talented she is! She is more than just funny!

I loved her in Chicago.

She is completely amazing! Did she get anything for any other categories? Like most beautiful people or anything? It's sad they didn't give her one of the FUNNIEST though. So sad, who are the morons that vote on this stuff?

You're right. How could they leave her off this list?! I love Queen Latifah. She's beautiful, funny, sexy, strong, and multi-talented. She would get my vote!

We all love Tina (Fey)lin.

As for the rest, whaaa?

Jo, wonderful tribute to the "Queen" - she has so many followers!

Happy Easter, kiddo...I left an Easter greeting to my blogger friends on my old "dead but not buried" blog, Bad Habit. Enjoy the peep show. ;-)

They had Wanda Sykes on the list if they had picked Queen Latifah they would have over shot their black lesbian funny woman quota. Besides, it looks like all of those actresses were from TV shows and the Queen do not do TV shows, not since that ...one she was in where I cannot remember the title.

Must dissent on this one. I think she's overexposed and lost her edge. A fine talent, but trying too hard to be all things to all people.

I know Tyler Perry ain't no girl, but he's definitely not funny, not like Queen Latifah.

I agree with you especially 'She is beautiful' LOL