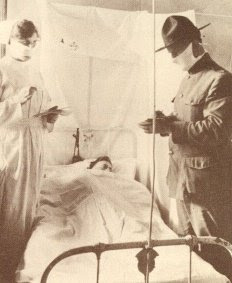 Two years ago, in an interview with Castwest News Service, Health Minister Tony Clement said that Canada must take immediate action on global warming to cope with the threat of new infectious diseases from abroad. Clement noted that diseases such as the West Nile virus are spreading and surviving because Canada's climate is getting hotter. ''There is an increasing threat of other infectious diseases,'' he said. ''Dengue fever is another one that epidemiologists are worried about right now, coming to our shores". He added that his department's pandemic plan will also be renewed shortly to address the risks of avian influenza and other diseases that would not normally be a threat in Canada's climate.

The truth is, global flu makes the threat of terrorism look like a walk in the park on a summer’s day.

In response to cases of swine influenza A(H1N1), reported in Mexico and the United States of America, the Director-General convened a meeting of the Emergency Committee to assess the situation and advise her on appropriate responses. The establishment of the Committee, which is composed of international experts in a variety of disciplines, is in compliance with the International Health Regulations (2005). The first meeting of the Emergency Committee was held on Saturday 25 April 2009.

After reviewing available data on the current situation, Committee members identified a number of gaps in knowledge about the clinical features, epidemiology, and virology of reported cases and the appropriate responses. The Committee advised that answers to several specific questions were needed to facilitate its work. The Committee nevertheless agreed that the current situation constitutes a public health emergency of international concern. Based on this advice, the Director-General has determined that the current events constitute a public health emergency of international concern, under the Regulations. Concerning public health measures, in line with the Regulations the Director-General is recommending, on the advice of the Committee, that all countries intensify surveillance for unusual outbreaks of influenza-like illness and severe pneumonia.

The Committee further agreed that more information is needed before a decision could be made concerning the appropriateness of the current phase 3. 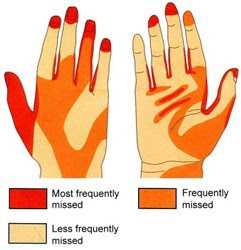 Whenever the Munchkins and I go anywhere, the first thing I insist they do when we come home is to wash their hands, wash their hands, wash their hands. Buy a good scrub brush from Crabtree and Evelyn and scrub the front, backs and under the nails. It sounds obsessive, but it is one of the main ways to prevent the spread of contagious illnesses, and it's amazing how many people don't do it properly. It's not necessary to use antibacterial soaps, just hot soap and water. The rule of thumb ... pun intended ... is to say the alphabet while you wash. By the time you have reached the letter "Z", that should be sufficient.
Posted by Jo at 6:48 PM

Good advice. I'd alway heard about singing the alphabet or Twinkle, Twinkle Little Star. People usually look at me funny in a public washroom. ;)

The following rules of hygiene and illness prevention have been approved by every Gang in the Southland:


1. First thing upon coming home, I wash my hands, but I do not follow the “Sing the Happy Birthday Song twice“ rule, though I recommend it for teaching kids. (I am *such* a rebel.)

2. Second best habit is not to touch any mucous membranes which germs find nurturing. Not to touch eyes, nose/nostrils, or mouth.

3. I have the toothbrush in the kitchen sink for cleaning the drain pipes and sometimes I use those to brush under the nails, but lacking that, one can do what I do in the upstairs bathroom where there is a bar of soap: I dig my fingernails into the softened soap several times and I figure they'll be cleaned.

4. I do not keep a hand cleaner spray in my purse. Too much trouble, although if I get the flu, *heheh* I might go buy me a squeeze bottle.

I do thanks to my dad,who always insisted that we wash our hands whenever we come back from outside or before we eat.I picture him waggling a finer with a "I told you so" look if he saw this :)

It's always been my priority too to head for the bathroom as soon as I get indoors from shopping or being anywhere outside our home. Even before putting away any frozen food I've just bought. I use a large stiff nailbrush which I scrape across the bar of soap and scrub away at hands and nails under hot running water. And do that especially before using the loo.....and again afterward of course.
Sharon.

I was just listening to the news about the swine flu deaths and thinking much the same as you! Let's hope it much ado about nothing, or much ado doo about nothing. But it pays to be careful and washing hands properly is really not a big deal, especially when you consider the alternative.

WASHING HANDS GOES WITHOUT SAYING, BUT IN ORDER TO PREVENT CATCHING THE FLU OR OTHER INFECTIOUS DISEASE, ONE SHOULD AVOID CROWDED PLACES, IF AND WHEN POSSIBLE.

That diagram's extremely interesting. I'll have to remember to wash those extra-thoroughly next time I'm washing my hands. :)

Don't forget that money is nasty and you should always wash your hands after dealing with it. you never know where that dollar bill has been!

So many times I heard that we are only able to think, because we do have hands - time to think about our hands, very interesting entry of yours.

I think about this at school, an infectious world if ever there was one.

It's amazing what a little soap can do. I've often wondered if the reason I'm rarely sick is that I wash my hands so frequently.

I learned working in virus labs - Just a little soap and warm water will protect you better than all the vaccines in the world.

Very good advice all round!

AMEN! I scrub my hands like a maniac. First thing I do when I get home from school is to TAKE A BATH--get all the crud off. Then I make a pan of hot bleach soapy water in the kitchen and do a quick swipe over everything before I cook. Remember, I have pets. People think I'm nuts--but let them! Who cares! A little soap goes a long to staying well. D

You couldn't be more right on the money!!
I just read on Google news that they are expecting major cases of swine flu this year. That means......it's gonna make it's way across the ole pond with traveling and tourism.
Great reminder and thanks a million for bringing attention to a small thing that could make a HUGE impact in spreading bacteria and viruses!!

Thanks for the diagram, I didn't know it.

Regarding "hot water":
According to the World Bank Health Services Department, there is no evidence to suggest that hot (or even warm) water is better for hand washing. On the contrary, the colder the water is, the less skin damage is done by the detergents in the soap after repeated hand washing. Washing with warm or tepid water may be more comfortable, but one need not find hot water to wash effectively.