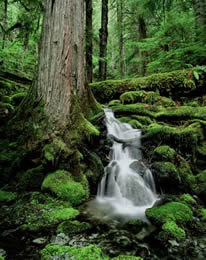 Now that summer is almost here, I want to share with you one of the most mystical, magical places on earth. It's on Vancouver Island, and it was practically at my back door when I was growing up. From where I lived, we had to drive over a mountain range called the Vancouver Island Range, in order to get to the other side of the island. The Vancouver Island Range has 199 peaks, and my favorite is Mount Arrowsmith. It is part of the Beaufort Subrange. On the other side of the mountain is the most beautiful old growth forest you will ever see, and it is aptly called Cathedral Grove. 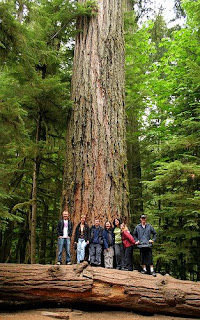 Some of the trees in Cathedral Grove are over 800 years old, and people come from all over the world to see them. The park is home to several species of birds, including rare owls and woodpeckers, as well as black bears, elk and cougar. The Cameron River and Cameron Lake are filled with rainbow trout, brown, and cutthroat trout, and my brothers and I used to go fishing there for rainbow trout. The trees in Cathedral Grove are so high, you can't see the tops, and on a sunny day the forest is in perpetual sun-dappled shade. Several of the trees are almost 30 feet in diameter. I don't know who these folks are -- I borrowed this photograph off the Internet. But I have stood with a group of my friends around a tree like this, and forming a circle, we were not able to join hands on the other side. 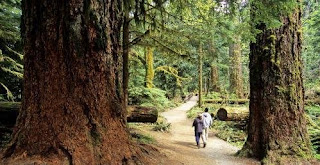 Cathedral Grove was given its name by Governor General Viscount Willingdon in 1928. In 1944, H.R. MacMillan, of the MacMillan and Bloedel Forestry Company, donated the land as a park. MacMillan received a Master of Science in Forestry at Yale University, and he recognized the beauty and magnificence of this old growth forest. The park in which Cathedral Grove is situated is called MacMillan Provincial Park.

In 2003, a plan by the BC Government to build a new parking lot to service the park was met by protest from environmental groups. In the current arrangement, the Park's estimated one million annual visitors are served by a road-side pullout-style parking lot. Government officials claim that the safety of tourists as well as passing motorists are threatened by the layout, and are seeking to build a new parking facility. The current plans for the lot involve the construction of a 5 hectare parking lot approximately 1.5 kilometres from the park. Critics claim that the construction will decrease the number of visitors to the park, and threaten the habitat and feeding grounds of the local elk population. In May 2004, the beginning of construction was halted by a protest organized by a coalition of environmental groups. The permanent protest involves a tree-top platform which is continually occupied. ... Wikipedia

"They paved paradise and put up a parking lot." 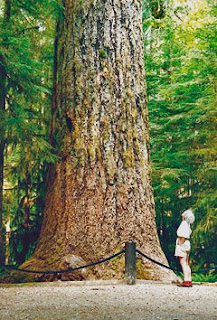 As a child, I can remember staring up at these huge Douglas Fir, Hemlock and Red Cedar trees, just as this child is doing. I could feel the spirits in the trees, and there was always the constant sense that something was watching me at all times. Cougars? Elk? Bears? Oh, yes, that and more. Sasquatch? Maybe. If they're anywhere, they're in Cathedral Grove. But most of all we can feel the life-force of the big trees and the huge prehistoric ferns that grow in their shade. Can you imagine a living thing that has been on this earth for almost 1,000 years. Think of the history that has taken place while these behemoths were reaching for the sun from out of the rainforest.
Posted by Jo at 6:35 PM

and lovely snaps.... (though they are off the net)

I wanna go there one day. Can you keep the parking lot development out till then?

Jo, this looks like a super spot. Just the type of place that I would love to visit and take loads of photos at. Thanks for showing this to us.

Looks amazing. Like a dream.I live in a concrete jungle :(

The forest is beyond description! We have forests very much like that here in Washington State, and once, walking through one, with many trees at least 800 years old, the forest, very dark...seemed to be alive with a presence. My little granddaughter was afraid as soon as we entered the forest and cried to have us take her out. This is a little one who is seldom afraid.....

It would be a shame to lose these ancient areas...kind of like destroying an old castle, or masters' painting.

OK. I have just added Cathedral grove to places I want to photograph. So many places... so few vacation days..

Another reason why our license plates read "Beautiful British Columbia!"

I love Cathedral Grove too - we stopped in last year on our way back from Tofino. The parking situation seemed to work fine, but I guess it was off season, so not as busy as it can be. Also wanted to say thanks for visiting my blog!

You make me want to go there one day...I'm a nature lover and I love being able to discover such delightful places - thanks for sharing :)

Oh absolutely beautiful snaps Jo. Must be such a wonderful place. I've always wondered where these huge trees were (whenever I came across pix of em) well now I know. Hope to try and embrace one sometime in this lifetime :)

I think while these beautiful behemoths were reaching out for the sky - peacefully- we were not really up to much good.

That's is so gorgeous. I'd love to visit there. Ironically, Lana was telling me about a guy down here in Louisiana who wants to grow a Sequoia down here.

There's nothing quite like natures' wonders! And the great forest is one. I love the smell and the sound of the breeze going through the trees when all is quiet. Beauiful! Thanks for the trip!

Absolutely beautiful! What a treat to live so near a place that seems to be simply magical in it's beauty. I am truly envious!

I love trees, I hate the forest.

What a beautiful, magical place it must be. I hope and pray that the protest is successful. A place like that should be protected forever

Gorgeous! Reminds me a bit of the redwoods in California but much prettier. Cathedral Grove is a very appropriate name for such a spiritual setting.