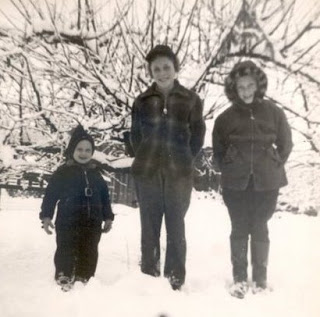 When I was a little girl, I had two older brothers, and they were a complete mystery to me. They lived in a different world than the one in which I lived. They lived in a world of boys' bicycles, fishing rods, hockey skates, boyish rough-housing and tree-forts. They had a wonderful fort in our back yard, and during the summer evenings they were allowed to sleep out there. It was as remote to me as the surface of the moon. Only once was I ever allowed a glimpse inside their little hideaway, and that was only for a few seconds. It was fabulous -- they had air mattresses and sleeping bags, flashlights, bags of chips and chocolate bars, books -- all the comforts of life. They kept me out of their fort by telling me it was inhabited by spiders as large as dinner plates.

My two older brothers were already graduating from high school when I was still in elementary school, but I enjoyed being part of a family, and having two older brothers. I felt very well-protected; my family made me feel safe. Well, I think that's what families are meant to do. 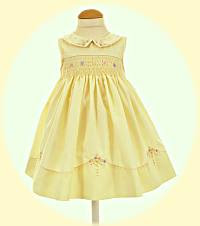 When I was in grade two, my mother made me a yellow dress. Mom was a wonderful seamstress, and I thought the yellow dress was the most beautiful thing I had ever seen. My mother worked on it during the evening, and I went to bed so excited to wear my yellow dress to school the next day. I knew I would be the envy of every little girl there. The next morning, my oldest brother gave me a ride to school on his bicycle. I sat in the basket on the front -- what a sight that must have been. As I was sitting in the basket, I could see the oil and grease from the road was being deposited on the hem of my dress. "Stop! Stop! My dress is getting dirty!" I don't think my brother could hear me, he kept on pedaling. When I got to school, I burst into tears. The teacher asked me what was wrong, and all I could do was show her my beautiful new dress, completely ruined. My mother had worked so hard on it. I sobbed all day. That evening, my brother felt just awful about it. He is a very kind-hearted soul, and he still remembers the incident and how terrible he felt.

My other brother is a born actor, and he used to entertain me for hours, putting on plays and acting out all the parts. As a teenager, whenever he came home from a date with one of his girlfriends, he would do a perfect imitation of the girl's father. I have seen my mother laugh until the tears ran down her face. My brother still has a very warped sense of humor.

Unfortunately, in our family -- on my father's side -- there is a history of genetic ischemic heart disease. Our paternal grandfather died from it at the age of 53. Both of my brothers have inherited it, and last weekend one of my brothers had a heart attack. I am terrified of losing them both, they're my family. They're my big brothers.
Posted by Jo at 6:18 PM

You are blessed with a close family. That's something for thanksgiving/ I hope your brother is recovering well.

Goodness, Jo, I hope he recovers and feels better soon. That's such a sweet story about your dress.

What charming photos. And a sweet yellow dress story.

Heart disease runs in my family as well. But my dad managed to live until he was 84....hard as his life was the last few years.

It's so nice you have a good relationship with older brothers. I hope your brother is soon on the mend so you can continue enjoying each other's company.

What beautiful memories of childhood! I hope you have many more years with your protectors!

What a sweet story! I'm so sorry to hear about your brother. I have heart conditions in my family as well. (My Grandfather had a quad. bypass) My Aunt just had a heart attack as well two weeks ago. She has 3 blocked arteries and doesn't take care of herself at all. She smokes 2 to 3 packs of cigs per day and drinks regular Pepsi like its going out of style. She may not live to see 60 if she doesn't change her ways. I do hope your brother is doing well. He will be in my prayers!

Oh Jo,I hope your brothers recover soon,not that you can completely separate yourself from it,but you sure can keep it in check by regular checkups,proper diet and excercise.Look after them well! :)

I sure hope he recovers soon, Josie. I know how worried you are about him.

Your brothers were and still are A Majority of Two. May you all three be safe and healthy !

Oh, I'm so sorry about your brother. I will say some prayers of well wishes for him. How lucky you were to have such great big brothers. I always wanted one when I was little...only had sisters...wonderful sisters, just wanted a mysterious brother :)
My grandma used to make me beautiful dresses just like your yellow dress. We certainly knew how to dress in those days. I always felt like a princess in my grandma's handmade dresses :)

Oh, I am so sorry you are having this scare. I will pray for his healing and your peace of mind. (P.S. I posted my interview "from you" on my blog today.)

its good to have such memories of your brothers. they''ll always be there for you. take good care, jack c

Jo, I'm so sorry about your brother's heart attack. I will keep him and your family in my thoughts and prayers.

Will be sending good thoughts to your brother. Hope he gets well quickly. Little dress is so pretty. As far as I know, no heart disease in our family--but the autoimmunes instead. Will be good for the medical community to figure out more about all diseases in terms of genetics. Guess they are working steadfastly on it. Hope so. D

Sending good thoughts and prayers your way for your big brother. Do you still have the yellow dress?

LGS, thank you. Yes, I talked to him on Saturday, and he sounded his usual self, thank goodness.

Pyzahn, well, I am hoping my brother has quite a few years ahead of him yet. Thank you. :-)

J9, thank you. I can't imagine not having them around.

Arley, you know, my brother looks after himself and doesn't smoke, so it was kind of a surprise, but it is genetic.

Miss Nobody, yes, both my brothers are quite health conscious, thank goodness! :-)

Leslie, yes, I have been very worried. Thanks!

TheChicGeek, oh lucky you! I always wanted a sister. You have no idea how fortunate you are. :-)

Muthu, I'm so happy that you love your little sister. That's wonderful!

CaroleE, thank you! And I will be right over to check out your blog!

Avril, thank you so much! I believe in the power of prayer.

Donnetta, yes, genetics is the new frontier. Soon they will be able to prevent illnesses, knowing the genetic makeup of the person.

Kathy, thank you! And no, the yellow dress is long gone, sadly. It was so pretty.

I'm so sorry. I hope he is feeling better soon. It scares me to death to think of losing my brothers.

Jo Just wishing your family, especially your brother all the best. Again a lovely story about your childhood.

Sending best thoughts to you and your brother.

Yellow sure seems to be your colour.

thats one beautiful happy family and I wish it stays that way forever...
such nostalgic post... :)

It's a beautiful love story....

I hope your brother is on the mend! My thoughts and prayers are with you.
I was lucky enough over Easter to be reminded what fun an older brother can be.

Everyone I think is more afraid of losing somebody they love than in dieing themselves .

I'm sorry to read about your brother's heart attack and I send you good wishes and positive thoughts for a really quick recovery for him. Big brothers are a pretty special breed! Lovely memories to have even though you were so upset at the time. Warm wishes, Vxx

Beautiful story Jo - what a loving remembrance! I wish the very best for your brother. May you all have many more years together to share your wonderful stories.

They do have better doctors today.
I'm sure he will recover fine.

I so agree with Dr. John, it's very difficult seeing love one sick and you do tend to worry about them all the time. Jo, I know your religious person, but if OK with you, will add your brother to my prayers.

Such an interesting story about the yellow dress. I sure hope your brother is going to be OK.

I'm sorry to hear about your brother. But glad that he's doing well now.

That's an adorable photo of the three of you. I've always wished I had a brother...or two.

Thanks so much for trip down memory lane, reading it reminded me so much of my chilhood and of my only brother who sadly past way of melanoma cancer at 52. He was a Hoot and he too would peddle me around on the front of his bike. Glad to hear your brother is doing better, family is something to cherish. I sure do.

I am sending hope to keep them both safe!
How tragic about your lovely dress. My mother made my beautiful clothes too, & I would be so excited to wear each new dress.

I have a younger brother, and through the years I've seen him grow to be a man and a wonderful, patient, concerned, connected, hands-on father.