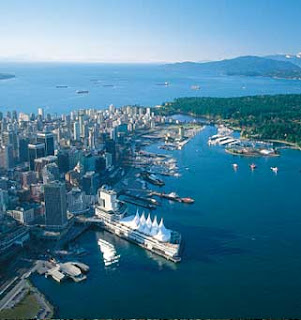 Vancouver has once again been picked as the fourth best city in the world in which to live, according to the Mercer Quality of Living report. Well, of course. The top four cities -- in order -- are Vienna, Austria; Zurich, Switzerland; Geneva, Switzerland and Vancouver, Canada and Auckland, New Zealand tied for fourth place. Interestingly enough, the top five cities in North America were all in Canada – Vancouver 4th, Toronto 15th, Ottawa 16th, Montreal 22nd and Calgary 26th. Honolulu was the top city in the US at 29th, and San Francisco was 30th. You can check out where your city stands by logging onto this website. Baghdad remains the lowest, at 215. Paris, France was 33rd, London, England was 38th and New York City was 49th. 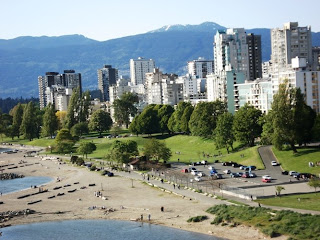 Like any city, Vancouver is not without its problems, of course. In the past few years we have had an increasing incidence of gang warfare, and the justice system has failed to deal with it sufficiently. These gangs are thugs -- plain and simple -- with no regard for human life, including innocent bystanders who have been caught in the crossfire. And we are dealing with a justice system that regards the perpetrators as "victims", but that approach hasn't worked so far. Apart from that, Vancouver is an extraordinary city. 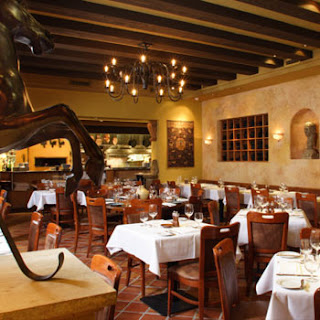 My favorite thing about Vancouver is the restaurants. We have some of the best restaurants in the world here. Because we have so many people from all over the world, we have a really wide variety of food. I like Indian food the best, and my second favorite is Japanese. And no, Japanese food isn't just sushi. One of my favorite restaurants in CinCin, (pictured here) where you will get the best Italian food outside of Italy. Just be sure not to wear slippery shoes on the tile floor -- like someone I know (who shall remain nameless) -- and she almost broke her ankle.

Next year we are hosting the 2010 Winter Olympics, so perhaps some of you might get a chance to pay us a visit and discover Vancouver.
Posted by Jo at 7:10 AM

Half of my heart lives in Vancouver and dines constantly at the Tea House in Stanley Park.
*num-num-num*

hmhm.... you brought the city with it's tastes and smells intact. kudos.

hey, you like Indian food. Whats your favorite dish in our cuisine.

I thought Indian food would be too spicy for you...

and i once tried a hot dog and (sorry to say) hated it... May be it would taste better over there.....

We're very spoiled here in Vancouver! And it doesn't bother me too much when I can't afford to go away on a holiday - after all...

Some day I've got to come for a visit.

Vancouver has always been on my list of places to visit/live. Maybe I'll get my hiney in gear and get there soon. :)

I hope muthu reads these comments. I want him to know that many North Americans agree with him and hate hot dogs. Those are not good examples of our cuisine. Wait a minute... maybe they are good examples of our fast food/junk food focus. That's why we are so unhealthy. (P.S. I love some Indian food... curry, yumm.. and hope to visit Vancouver some day.)

I love Indian food, too. Ottawa is not much a food city. Most of the restaurants I've tried here are mediocre to bad. What they seem to do best is Vietnamese. There are a lot of them and many of them are really good. I can, of course see why Vancouver would excel at Japanese. Congrats!

Amourissima, oh yesss... the Tea House in Stanley Park. It's wonderful, isn't it?

Muthu, *heh* hot dogs are not good examples of North American "cuisine". Perhaps salmon with maple glaze, done on a cedar plank? One of my favorite Indian dishes is butter chicken. Yum!

Charles, yes, you must! You and Lana would love Vancouver.

Forgotten Katalyst, now, that would be a good place to start in your "new life"!

XUP, yes, we have lots of Chinese and Japanese restaurants here, and also lots of Russian, oddly enough, which is also wonderful food.

sounds like you have a true melting pot up there. nice weather, great food, beautiful location.......why would you ever leave? enjoy, jack c

Congrats ! picked one of the Best city in the world the Vancouver !!
Lovely pictures.....

Your blog along with several others have really opened my eyes to what Canada has to offer. I have been there several times but havent done anything exciting yet. I would love to see vancouver now!

And for all you bloggers out there who tell me how lucky I am to live in New York, take note of the 49th place, which in my opinion, is quite generous!

Well that is great for you all but I am guessing I will never get that far up the world to see your beautiful country and city so PLEASE!! keep those gret photos coming on your blog.........now about Australia we are SO! MUCH! BETTER! then New Zealand!! Auckland (never!!!) is that true (well I never!!!) (smiles)

its all just good fun!!
Lee-ann

This doesn't surprise me in the least. After our visit to your country last fall - we almost called the moving van!

Canada and Vancouver are becoming more and more enticing! I think the variety of restraunts is a great reflection of how multicultural a place is. I also love indian, especial the fantastic vegetarian recipes, my second favourite is thai, love the aromatic spicy food!

I am not surprised Vancouver was picked as one of the world's top cities - it is quite an amazing place.

However, I am much more interested in knowing more about how or why you slipped in that fancy restaurant! Heh!

Perhaps you were dancing the night away with some tall, dark stranger??!

Or maybe a waiter spilled his tray when he walked past your table?

Maybe you slipped when you were doing a double take of some famous person there?!

Congratulation! Living now for four years in Athens, Greece still demands lots of nerves to get used to 'city life'.

I read that yesterday and thought of you and the few other folks I know from Vancouver - Congratulations. I seem to be having my 10 year itch and would love to relocate - I'll take any of the top 5 cities but I would have to say Vancouver would be number 1 for me. I hope I can visit there one day - it looks absolutely beautiful!

I saw a little bit of Vancouver many many years ago. Would love to go back! I think you're very lucky to live there. Congrats!

Congrats on your hockey team beating our hockey team last night. It looks like the mayor of Vancouver will be enjoying the jumbo hot dogs, Polish sausage, two bottles of red sangria and a case of cheese that he won in the wager with Mayor Daley.Vancouver Canuck's 7
Chicago Blackhawks 3

Looks like they can actually play hockey in Vancouver as well. God (sorry MaryEllen)--knows Toronto can't tell ice from nice.

Well, hell! I'd move there just for the J factor! :) It's such a beautiful city - and I'm so glad the oppressive poverty of the 1980s has abated!

You have a beautiful place to call home! :)