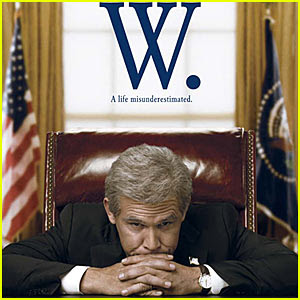 The Presidency of George W. Bush has now passed into history. Only in the fullness of time will his Presidency really be assessed, but right now it would appear he might not be judged so favorably. However, this post is not about George W. Bush or his Presidency, but about Josh Brolin's performance in "W", the movie of Bush's biography. I rented the movie out of curiosity because I wanted to see some of the behind-the-scenes story of George W. Bush's life. Of course, we can never really know what went on behind the scenes, but I suppose it makes for good fiction. 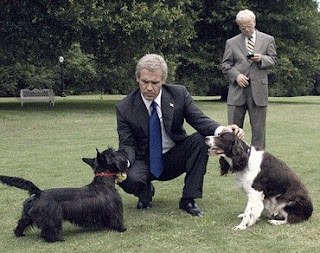 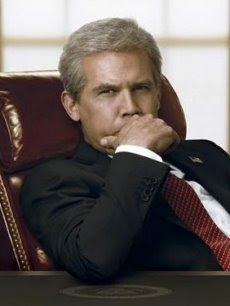 Who knew Josh Brolin was such an incredible actor. He had every nusance of George W. Bush in exact detail. He morphed into Bush, until you could not tell where one ended and the other began, not only as a young man but as an older man as well. I was mesmerized by the subtleties of Brolin's performance. Bush/Brolin? Brolin/Bush? I couldn't tell. According to a recent interview with Josh Brolin, he is a Democrat, so he did not have a particular affinity for George W. Bush. However, he played Bush with such empathy and humanity, I couldn't help thinking he somehow understood the man, even though he did not necessarily agree with his politics.

This movie is not particularly flattering to George W. Bush -- at all -- but no matter what your politics, if you haven't seen the movie, you should check it out just for Josh Brolin's incredible acting.

The acting may be great but the subject matter doesn't interest me.

I will have to rent that one. Havent seen it. I really like Brolin though. Just found out not that long ago that he is a gooney!

Thanks for the recommendation. I'll definitely check it out.

Harvey Milk was an acquaintance of mine- Sean Penn WAS Harvey Milk. I love Brolin- thought he was brilliant in No Country For Old Men but wasn't crazy about his performance in W. Thought it was kind of an imitation rather than a performance...As opposed to Penn who not only became Harvey Milk but portrayed him with nuance and intelligence- It was, of course, a much better movie than W so that might have had something to do with it. Oliver Stone is so heavy handed - I tend to avoid his films usually but I checked this one out. Not impressed- and I despise Bush- .

Flowrgirl1, what is a gooney? Whatever it is, it sounds like fun.

Leslie, it's worth watching.

Crone51, you knew Harvey Milk? Wow! He was an interesting person, and Sean Penn's performance was amazing, for sure. The timing was perfect too, wasn't it? I was, however, very pleasantly surprised by Josh Brolin's performance as Bush. I was also impressed with his performance in "Milk", for which he was nominated as best supporting actor.

It's too soon to make a film on Bush. There isn't enough historical perspective for that. Maybe they should make one on Clinton . He's the first young president in the triumvirate of young presidents(Clinton, Bush, Obama) that have led America to nowhere.Young age isn't good for Presidency.

I would be interested to see the movie. It is so interesting to know the man behind "the chair"

XUP, the movie is not particularly flattering to Bush. If it is fictionalized, then the real Bush must have been a genius, because the Bush in the movie is -- not! :-)

Lee-Ann, hello! Yes, I am always curious to see behind the curtain. I found the movie of "The Queen" very interesting as well.

not a real fan of mr. bush and some of his cohorts. it is a tough job and thats all i'm going to say. time will tell....jack c

Jackc50, my post is about Josh Brolin -- not Bush. I think folks are getting that mixed up. :-)

I misunderestimated the frustration I would feel when the LONG post I wrote vanished into thin air. Oh, well, heh heh... it's too early for me to watch a Bush movie, though I appreciate your good review of Brolin. I'm still recovering from the Bush era. It'll be a while.....oh, here's a question for you - "is our children learning?"

Now you've got me curious... I wasn't planning to see "W"... But now we'll see!
PS: Thanks for stopping by my little blog - I love yours and it's an honor that you visited!

you got me wondering...

DUTA, Obama has only now been in office 100 days and accomplished more than you will admit. And, didn't Clinton get us out of debt? So far, Bush has to stand on his record which is not too good. Maybe time will be kinder to him than the country is, right now.

It sounds great to me! I want to see it. Like it or not, "W" is part of our history.

I think Bush is a decent fellow...but I think he was a terrible president.

I was avoiding it, honestly, but I AM curious. And you're definitely someone who's discernment I trust so I think I will check it out. Josh Brolin was fantastic in No Country For Old Men, despite the general suckiness of the movie itself...which really it couldn't help. It was a book first and it only followed the storyline.

CaroleE, are children learning? I think they are. My munchkins sure seem to be learning. They are both very bright.

Megs, it's worth seeing just for Josh Brolin's performance. What an actor!

Muthu, I think you will enjoy it.

Dee, I think folks will generally agree with Clinton was a good President, yes. I liked him.

Carla, that is what the movie portrays, that he was a decent man, but a dreadful President.

Starlene, he was excellent in "Milk" too. I had no idea he was such a good actor. Who knew!

I've already convinced my husband that at the next trip we take together should be Vancouver. I don't think we can do it this year, maybe next year.

My son rented "W" but I never asked him if he liked it or not. He's not a Bush fan and I wasn't sure why he wanted to rent it. He said a friend of his saw it and said it was worth the watch. I'll have to check it out.

That's funny, I just watched this movie last weekend. It protrayed George much the way I think of him as a party boy and he is trying to outdo his Daddy.

I thought the acting in the film was absolutely top-notch for every character. However, I hated the film. The writing was horrible cheesy in places, especially when trying to work in Bushisms. Even the best acting job on earth can't save a terrible movie, I suppose.

You have now piqued my interest. I probably would have taken a pass on seeing the film, but from your commentary and the photos you posted I am quite intrigued - Brolin seems to (at least visually) capture the Bush mannerisms.