The Boy In The Striped Pajamas 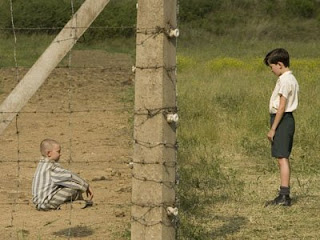 I just watched the most amazing movie about two little eight year-old boys, Bruno and Schmuel -- one the son of the commandant of a German concentration camp, the other a prisoner in the camp. The horrors of the Holocaust are seen through the innocence and simplicity of their eight year-old eyes, as they form a friendship through the barbed wire fence surrounding the camp, and as we watch the trust they build in each other, we are reminded that we are all the same. So, here we are all these years later, and people are still doing the same things to each other -- the Palestinian and Israeli war; the civil war in Darfur; the war in Afghanistan; the Iraq war. People never seem to learn, do they?

I’m not going to say anything more about the movie, except to say if you haven’t seen it yet, you should watch it. It’s a thing of beauty from start to finish. The movie won several awards, including the audience choice award at the Chicago Film Festival. The two little boys who play Bruno and Schmuel are just delightful, but be prepared -- you will fall in love with them.

The movie is based on a book written by John Boyne. He had originally written the book as a children’s book, but it is definitely not for children.

Every once in a while I will watch a movie that is so good, I immediately want to watch it again. This movie is one of those movies. And yes, they all speak with "plummy" British accents, but I would rather hear that than listening to them speaking English with phony German accents.

I would love to watch this,seeing I lov anything to do with history.

Thanks for putting this up Jo. I've been hearing good reports but posting this clip helped.The excerpts are revealing in terms of the issues. The acting looks natural as well. Must look out for it when it hits the NSW Central West.

I havent yet seen the movie jo.

but sure will try it out. your description of it sounds it to be worth spending time to watch it...

and nope people will never learn jo. War & violence lend credibility to those people who dont have know any other means to express themselves.....

I wondered if it was any good, I've been curious about it since it came out.

I just watched this movie the other night and found it absolutely enthralling! Some might find it slow moving, dull, and/or depressing, but I found it fascinating to see WW2 from the perspective of the Germans and two innocent children who really had no understanding of what was going on or why. I highly recommend it, too, but be prepared. It's shocking.

We have watched this too, with profound moving effect. As it happened we had watched several movies along the same vein, & all were equally moving.

i like this kinda movie... i ll watch it pretty soon jo! thanks for the info!

And yes! people never try to anything even after these years of struggle to survive! we dunno when they'll come to know the value of life

Read this book a few months ago and I kept hope until the last page...reaching it however, nearly closed the book without reading it...couldn't believe my eyes.
Being a German by origin it is a piece of history carrying with me, however, doing whatever I can to fight something alike to happen again. Additionally, avoid buying striped pyjamas for my son ;)

Just watched the trailer. This movie is so interesting! I can't wait watching this movie!

That does look like it would be gripping. Thanks for the heads up.

I've heard good things about this movie. I've been staying away from movies since our local one closed. I would have to find it on VCR...do they even put movies out on VCR?..
Missed commenting on Atrial Fib. I have had this for years. It used to frighten me. I'm on a couple of meds that keep it under control and,of course, blood thinners. I trust you are under medical care.

Thanks for the heads-up on this movie. I know what you mean about the British accents, I often wondered why this is done is so many movies, I see it often in movies about the Roman Empire, all the Roman soldiers and such spoke with British accents.

Anyway, I'll try to watch this movie, but can't guarantee I'll make it far. For some reason, I have such a difficult time watching movies about the Holocaust. As soon as I see mothers separated from their children, or children being harmed I get so freaked out I have to turn it off. I realize this is the reality of what happened, I'm not denying that. I just can't bear to look at it, I have horrible nightmares, I guess I'm just uber-sensitive to this.

I have been TRYING to watch this movie since it was out in theaters- it played in the independent theaters which…
A) I’ve never seen a bad movie in them- EVER (and I’ve seen a lot of movies in them.)
B) super close to my place.
C) not at all over air conditioned- too major bonuses.

This WILL be the next movie I will rent.

I can't watch it - even the trailer made me cry. If war makes no sense to children, how come it becomes ok once we are adults?

I find it hard to watch films like this, because I cry through most of them. It sounds like a great story, though. Yes, you'd think that by now, humankind would have evolved enough to realize the pointless stupidity of war and of attacking one another, wouldn't you?

I read the book and was totally fascinated; now I am eager to see the movie. I usually want to wait some time between the two. If I remember the book too clearly, I am inevitably disappointed in the movie. But I think enough time has passed since I read the book, and it sounds like they did a great job with the movie. I'll look for it.

I've heard a lot of nice things about this movie, but never got around to watching it...only coz I thought I'd cry. :(
Perhaps I'll read the book first...in either case, thanks Jo :)

What a powerful movie theme - I hope I get to see the film soon.

I've watched this too.
It's a very touchy movie.

Miss Nobody, this is a fabulous movie!

Ms. Bubblefish, the acting was wonderful. Be prepared for the ending, though...

Muthu, what a way to put it! I could not agree more.

CTVicky, it's definitely one of the best movies I have seen.

Leslie, yes, wasn't it amazing how the Germans were so protected from the reality of what was going on!?

Meggie, have you seen "The Black Book"? Omigoodness!

Pranksygang, well, this movie was certainly an eye-opener...!

Mo'ikeha, oh, goodness no...! No striped pajamas for you son. Not after seeing this movie!

Amor, the movie is beautiful and horrifying, all at the same time.

Hilary, I have a feeling you would enjoy it.

Dee, I was on medication at one time, but not anymore. And yes, you should rent "The Boy in the Striped Pajamas" if you can.

Mary Ellen, well you would definitely have a problem watching this movie, but not for the reasons you think. It was horrifying!

Amourissima, when you watch it, you will want to see it again. It's that good!

Tryingmybest, I think war makes no sense to anyone, but still, people keep at it, don't they?

Deedee, the human race is a warmongering race,unfortunately. It will always be this way.

CarolE, my understanding is that the ending was slightly different from the book, but with the same horrifying results.

Rose, I am a movie buff, so I enjoyed the movie. The acting was excellent as well.

Paula, you will not be prepared for the ending. It's horrifying, but you will be unable to look away.

WildChild, yes, it is mesmerizing, isn't it? I enjoyed it, even though the subject matter was so awful.

I have heard of this film but have not seen it. I have seen another called Fateless which I purchased as DVD from Hotmovies (Will have more info on it) about a 14 year old boy rounded up and imrpisoned in Auschwitz by Nobel Prize winner Imre Kortesz from Hungary.