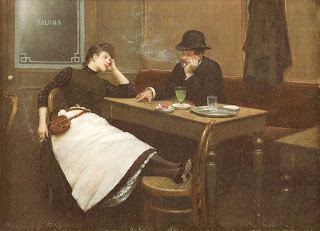 After examining the elderly gentleman, the doctor said to him, "You appear to be in good health. Do you have any medical concerns you would like to ask me about?"

After examining the man's elderly wife, the doctor said to her, "Everything appears to be fine. Do you have any medical concerns that you would like to discuss with me?"

The lady replied that she had no questions or concerns. The doctor then said to her, "Your husband had an unusual concern. He claims that he is usually cold and chilly after having sex with you the first time; and then hot and sweaty after the second time. Do you know why?"

"Oh, that crazy old fart!" she replied. "That's because the first time is usually in January, and the second time is in August."
Posted by Jo at 2:50 PM

twice a year, not too bad for the old guy.....could probably use some viagra though...heehee. have a nice weekend, jc

Good one Jo. Could the weather in Canada at the moment have brought that on. I understand from some of your earlier blogs that you probably live in or have visited Vancouver. I have only spent a few days there a couple of times but would have to say it is one of my favourite cities that I have visited around the world. Can I assume that the still life works on your blog are your art works. Are they water colours? When I try to do work like that I tend to use far too much colour. I like the variety you bring to your blogs.

Perhaps the condition will change due to global warming!

This is a winner. I couldn't help myself, but drop in to make a comment. Which by the way is: LOL.

LOL...Thanks for the giggle. That was cute.
By the way, Jo, I love your new banner look! Very nice :D

Have a Happy Day!

and i hope u wont mind if i follow your blog!

Guess this is my song...LOL

Funny indeed, although he might like to find another activity to spend time with his wife, as the 'togetherness' demands also having a partner in thoughts, dreams etc.

Hum, I thought it was always just "hot and bothered"

*bursts out laughing*
Bless you Jo!

LOL! Excellent! I'll have to remember to tell that one to my mom's lady friends at her retirement apartment. They'll get a real kick out of it. :-)

When you are older, well, you don't care what other people think!!

Omigosh, you folks are a hoot...! All of your comments are even funnier than the post. *heh* Thank you. :-)

nice post! 'nyway, I don't wanna get old with a complaining wife! lol! specially on matters like sex.