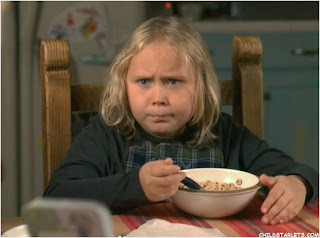 I don't watch much TV in the evenings, mainly because there isn't much to watch on TV, and mainly because -- well, the truth is -- I need a new TV, and anyway I prefer to watch movies. But one show I do enjoy is "Medium". Do any of you ever watch it? It's consistently good. And one character who just cracks me up every time she's on, is Bridgette. That little girl is a hoot! Where on earth did she come from? She steals every scene she's in, and I have never seen such a natural-born actor.

The little girl who plays the part of Bridgette DuBois is a young lady named Maria Lark. She was born in Siberia, Russia, and was adopted by an American single mother. Maria has been on "The Tonight Show" with Jay Leno four times, and is the youngest person ever to have co-hosted "The View" with Barbara Walters, et al. And believe me, that young lady can hold her own with Jay Leno and Barbara Walters. I can see Maria Lark growing up to become a wonderful actress and a force to be reckoned with. When I ask anyone I know "Who is your favorite character on 'Medium'?" they always say, "Bridg!"

You know how some people are born with their inner compass set on "cool"? They're inherently cool, and no matter what happens, they're cool. Well, that's Maria Lark. Here is a small clip of some of the outtakes from "Medium". I laugh every time I watch it.

I've never watched the show before...but I enjoyed the clip...

I love Bridgette. Especially loved her in the last episode,"I'm fine, I'm going to class." --last week. And I love the season 3 gag reel.

I watch Medium every week. All 3 of the girls are just as cute as can be. Bridgette is a stitch. I saw her on Leno also and got a kick out of it. Clever little girl.D

That is one of the shows that I love to watch....Bridgette is funny! Thanks for sharing the gag reel, that was great!

I haven't watched this program for awhile but Bridj was my favorite too!

Her face is very expressive...but i'v never watched it before too....

Donnetta, the whole family is very realistic. The girls are all so cute!

Kym, Bridgette is hysterical, isn't she?

Nomore, oh, her face is wonderful. She's too funny!

Never watched it, but that was funny.

My person Mandy watches Medium and she often comments on how great Bridgette the character is and how great the actress is. Thanks for all the info about the Maria.

I really love Medium, and now that you mention it, I love Bridgette too. I enjoy watching all of the family scenes on that show.

I loved that - I watched it three time yep!! I loved watching that..........I think in Australia we are still in season one! (smiles)

Muzzle (my human mum) loves Medium and watches it every week even though it's late and scares her (she's a bit of a wimp). She says she loves Bridgette too :)

so the seeker has trouble with telly.......as with anything, you take the good with the bad. take care jo and enjoy your sunday...jack c

"Medium" is one of my favourite shows and I watch it whenever I can.

We watched some of the first season. I was disappointed that they focused so much on the dissolution of the marriage so we stopped watching. The husband's in this clip so....

Greenpanda, I'm not sure if you get the show in England, but Bridg is funny!

Ruby, Maria is going to go places. I don't know who discovered her, but she is brilliant!

CTVicky, the family scenes are so realistic, aren't they?

Lee-Ann, you get the show in Australia now? Well, you're in for a real treat!

Minnie-Moo, yes, the show can be a bit scary at times. But's it's a great show, and Bridg is wonderful.

Jackc50, well, I guess everyone is different, and that's okay. I hope you enjoy your Sunday too. :-)

Leslie, yes, I try not to miss it as well, even though it is late.

Claudia, they are very much married. Joe is a very integral part of the show. It's too bad you stopped watching.

I never saw the show but she is a cutie! Loved the out takes too!

I haven't watched the show all season! I used to be a faithful watcher. Something else must be on at that time now that I'm watching. But I've always loved Bridgette! She is truly a hoot.

I never miss Medium and I get cranky if the new season starts too late lol. Bridgette is a hoot.